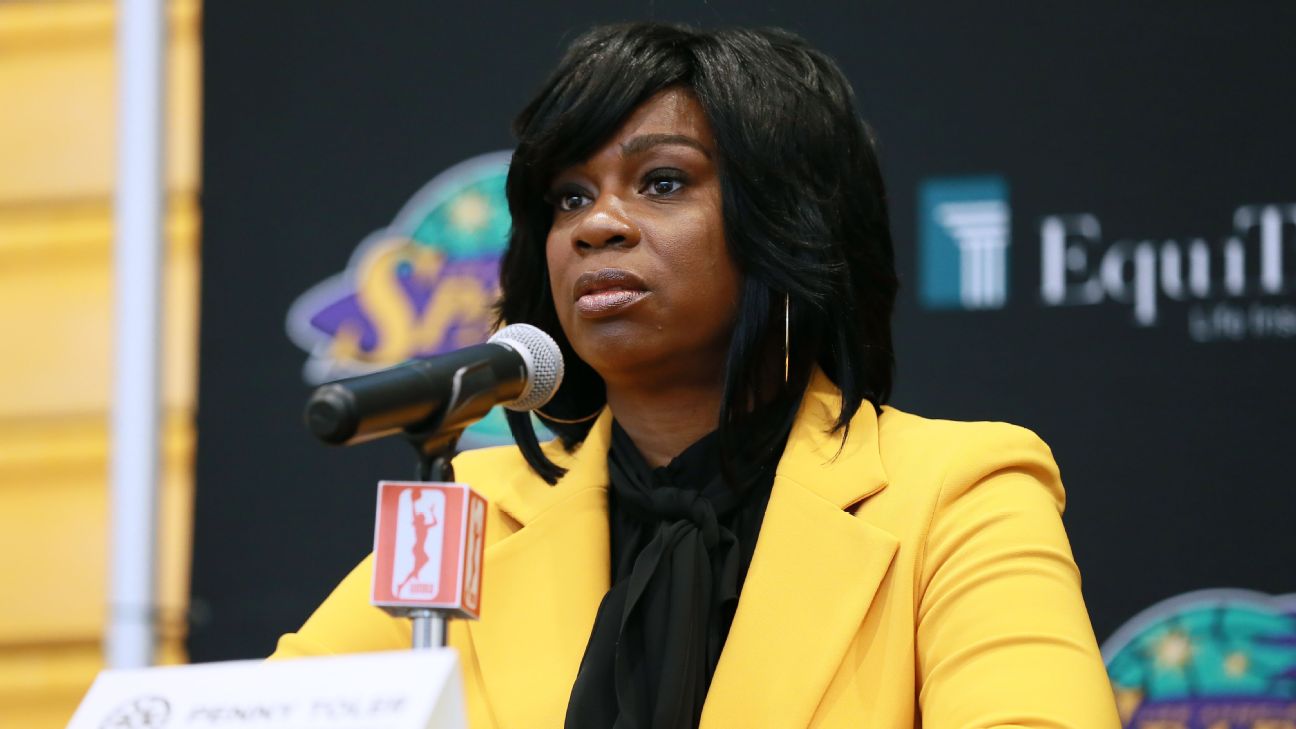 Former Los Angeles Sparks general manager Penny Toler is suing the WNBA team, saying she was fired for raising complaints about inappropriate sexual relationships involving the team president and a managing partner, not for using a racial slur.

The Sparks say Toler was fired on Oct. 4, following a profanity-laced tirade that included using a racial slur after a playoff game a few days earlier. In the suit filed Tuesday for gender discrimination, Toler said if she were a man, she would still be employed by the team.

Toler said her termination had more to do with retaliation "after raising complaints about the workplace conduct" of former team president Christine Simmons and team managing partner and governor Eric Holoman, "who were engaged in an extra-marital affair" during Simmons' tenure as team president -- a relationship Toler said made doing her job difficult.

Toler also states in the suit there was a double-standard for male employees, including the team's former coach from 2015 to 2018 -- who was Brian Agler, though the suit doesn't mention Agler by name.

When contacted Tuesday, Holoman said he was not aware of a lawsuit being filed. Neither Simmons nor Agler could immediately be reached Tuesday for comment.

Toler, who had been with the franchise as a player or GM since it was first founded in 1997, describes a soap-opera-like atmosphere in the lawsuit that allegedly included sexual relationships between Simmons and a ball boy and the coach and a player.

"It looks like she was singled out and treated differently because she was a woman," Toler's lawyer, Dawn Cox, told The Associated Press, referring to Toler's postgame comments. "Coaches speak to their players to get them fired up, many coaches use harsher language and far more controversial language. If the term is not OK, it's not OK for everyone."

Toler said initially Holoman had publicly dismissed accounts he or Sparks players were offended by her language and that only later, when the decision came under scrutiny, said she was let go because of the outburst.

It is unclear who within the Sparks organization Toler registered her complaints with about the alleged Simmons-Holoman relationship. Toler said in the suit that even after Simmons left the organization in 2018 she had influence on decisions the team would make because of her personal relationship with Holoman. Toler said she was looking into trading Candace Parker, but because Simmons and Parker were close, Holoman wouldn't let her make a deal.

"I wasn't part of the clique," Toler told the AP. "Everyday people would have no idea what I went through here working for the Sparks after they were acquired by this ownership."

She said it was like walking a tightrope, trying to balance getting "the team to win a championship while stepping on a minefield when I try to speak up when things weren't right."

Toler's executive assistant, Angela Bryant, who worked for the GM from 2009 to 2016, said that Simmons' relationship with Holoman "was an open secret. It was like a joke.

"Everyone knew about it."

Toler said in the suit the inappropriate conduct was not limited to Simmons and Holoman.

The former GM said she confronted Simmons about another sexual relationship the team president was having with one of the Sparks ball boys, who lived with Bryant. Toler's assistant said she was aware of the relationship with the ball boy, who Bryant said was of legal age.

"I had a brief discussion with Christine" about the relationship, Toler said. "I was so embarrassed and told her I hope it stops. It's really putting us in a bad situation. The organization would face a backlash, but also the whole league in general."

Toler said she was treated differently than Sparks' male employees, including Agler. Toler said the former coach not only verbally abused players and was not disciplined for it, but also had a sexually inappropriate relationship with an unidentified player.

Toler said she asked Sparks management to investigate Agler's relationship with the player and was told by Holoman that he would handle it. -- but that no action was taken. She said she didn't hear anything about the allegations again until the league reached out to her in 2019.

Toler said the former coach's "sexually predatory conduct caused certain Sparks players to complain that he made them uncomfortable, and compelled other Sparks players to leave the team altogether." Agler eventually resigned and is currently coaching Dallas.

Toler's contract was set to expire on March 31. She has had discussions for the last few months with the team about getting the pay she feels she's owed and to clear her name, but she said they didn't go anywhere. She said she didn't want to damage the reputation of the Sparks but that was left with no other choice, leading to the legal action.
Report a correction or typo
Related topics:
sportsespnnewsespnw sportwnbalos angeles sparksespnw sportsespnw
Copyright © 2021 ESPN Internet Ventures. All rights reserved.
More Videos
From CNN Newsource affiliates
TOP STORIES