Francisco Lindor helping Indians round into form at right time 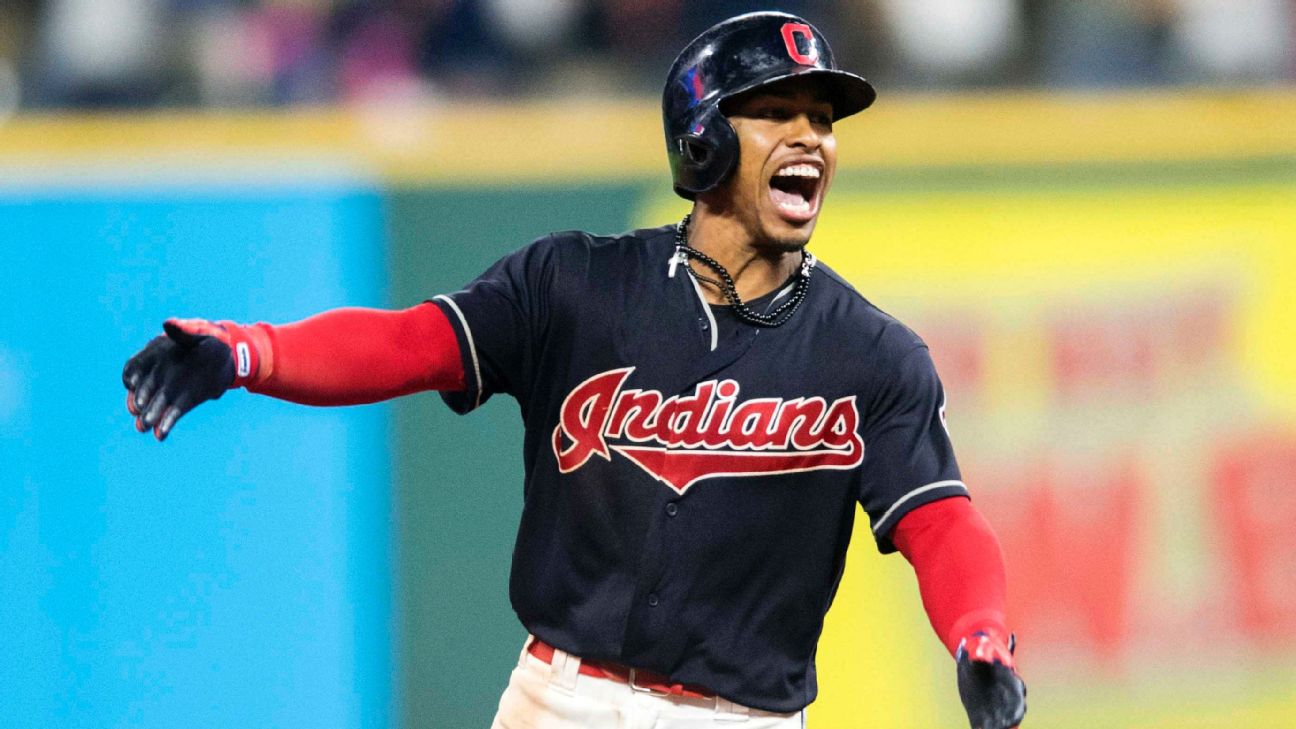 The Cleveland Indians clearly benefit from being the big dog in a kennel full of runts. That doesn't mean Cleveland can't break baseball's longest championship drought.

The Indians' uneven season seems to be picking up momentum lately. You'll get that feeling after a game like Wednesday's, when franchise face Francisco Lindor popped a three-run homer in the bottom of the ninth to give Cleveland a 5-2 win over Minnesota.

It was the second game-ending home run of Lindor's career. This one came with two outs, setting off one of those boilerplate celebrations at Progressive Field. You know the scene: The hero hits a home run. He celebrates around the bases, becoming more euphoric with each step. He might or might not throw his batting helmet. (Lindor chose the former option.) He leaps onto home plate, then he and his teammates do the pogo-stick dance. It's a formula so ancient that if he were still around, Joseph Campbell would write a book about it.

Anyway, in any normal season, Lindor would be a leading MVP candidate. Entering the day, he was on pace to put up 8.7 WAR, per FanGraphs. That's fourth in all of baseball. Unfortunately, the three players ahead of Lindor -- teammate Jose Ramirez, Angels star Mike Trout and Boston's Mookie Betts -- all reside in the junior circuit and all are threatening to break double digits in WAR. Meanwhile, the top position player in the National League -- St. Louis' Matt Carpenter -- is on pace for 6.9 WAR.

So it's important to focus on the quality of Cleveland's play, within context, as opposed to its actual record. There won't be many chances for the Indians to prove their mettle against quality opponents before October. They have two series left against the Red Sox, but the rest of their matchups are against the Central and a few other second-division opponents from other divisions.

Luckily, Cleveland's quality of play has been on the uptick of late. After Wednesday, the Indians are on pace to finish with a plus-161 run differential, a pace that is at its highest level since early April. Cleveland is likely to finish the regular season out of the spotlight, if only because of the lack of stakes at play in their games. But this is a team that is very much rounding into form.

Lindor's heroics came exactly a year since the last two-out, bottom-of-the-ninth homer to win a game for Cleveland. That one was by catcher Yan Gomes. That dinger turned out to be at the vanguard of a historic sprint to the finish for last year's Tribe. Beginning with the Gomes game, Cleveland went on to finish the season with a 43-10 run.

Could Lindor's blast on Wednesday herald a similar breakout?

DeGrom gets back in win column:Mets righty Jacob deGrom earned the win Wednesday, tossing six scoreless innings with 10 strikeouts. It has been a rough season for the sub-.500 deGrom, who is 6-7 on the campaign. See what I did there?

By now, we mostly all realize how misleading a pitcher's win-loss record can be in any given season. Still, few hurlers have ever have had a wider disconnect between the win column and the ERA column than deGrom does this season.

DeGrom lowered his ERA to 1.77, over a half-run better than Washington's Max Scherzer atop the National League leaderboard. Coming into the day, deGrom ranked second in the NL to Scherzer in WAR at FanGraphs, and third behind Scherzer and Philadelphia's Aaron Nola at Baseball-Reference.com. He's tied for second with Arizona's Patrick Corbin in the league with 183 strikeouts and has given up only eight home runs all season.

That is to say, in every category except wins, deGrom rates as a leading Cy Young contender. His candidacy will be complicated for voters. A lack of wins is something we have been able to overlook in recent years, at least when a candidate resides on his own tier, performance-wise. But is there a threshold where it just feels wrong to vote for a guy? Especially when you consider the terrific seasons put up by Scherzer and Nola.

If deGrom loses the award because of the Mets' failings around him, it'll be because he wasn't able to separate himself from other very good candidates, and where the separation exists, it'll be in the win column. It's not fair but, then again, when filling out the ballot for an award, it's worth considering what a player contributed to, at least as a tiebreaker. That's my philosophy, anyway.

Wednesday's win was deGrom's first since June 18. According to ESPN Stats & Information, during the "drought" he posted a 2.47 ERA -- 11th in baseball -- despite a record of 0-5. Here's another note from our great stats group: The two worst qualifying ERAs in baseball this season belong to Chicago's Lucas Giolito and Seattle's Felix Hernandez. Both have won more games than deGrom.

Here's another example: Texas' Yovani Gallardo improved to 7-1 with a win against Seattle on Wednesday. His ERA for the season is 6.11. The Rangers are averaging more than 10 runs per game with Gallardo on the mound.

If deGrom maintains the sub-2.00 ERA and does not win the Cy Young Award, he would join some rare company:

Lowest ERA in a season without winning Cy Young

Tiant's epic ERA came in what we now know as the Year of the Pitcher. Tiant not only didn't win the Cy Young that season, he didn't get a single vote. Detroit's Denny McLain won 31 games and was a unanimous pick for the trophy.

Ivy, lights and soaps: Ask any longtime Cubs fan, and they can tell you at the drop of a blue hat. When was the first night game at Wrigley Field? Eight-eight-eighty-eight is the immediate response. As in Aug. 8, 1988, when they turned on the lights at the Friendly Confines for the first time.

The 30th anniversary of that historic date was Wednesday. A Cubs fan can tell you that there was no winner on eight-eight-eighty-eight. The game was rained out before it went official.

The first official night game was the next day, a win over the Mets that featured RBI singles from Ryne Sandberg, Mark Grace and Andre Dawson. Thus, Thursday marks the anniversary of that game. Eight-nine-eighty-eight. Doesn't have the same ring, does it?

Alas, the Cubs weren't around to celebrate the anniversary of either date. They were getting gobsmacked in Kansas City, at beautiful Kauffman Stadium, where night games have always been a thing. The Cubs' next home game is Friday afternoon against Washington.

The White Sox did play in Chicago on Wednesday, though, taking on the New York Yankees. It was under the lights, which, as it happens, I can see over my right shoulder if I turn to look out the window of my home office. Yep. There they are. Game is still going. I also know when the Sox hit a home run even if I'm not at the park because they set off fireworks.

Thanks to my good friend Google, I can tell you that the first White Sox home game under the lights took place on Aug. 14, 1939. Chicago beat the St. Louis Browns that night 5-2 behind a complete-game performance from Johnny Rigney.

Two notes from that linked story, which originally ran in the Chicago Tribune:

"The major complaint of players is that a ground ball makes a shadow as it skips across the turf, thus increasing the hazard of fielding."

"Even though it was a hot, steamy night, the park was almost completely free from insects."

By the way, a note for my mother: The leadoff hitter for the Browns that night was Johnny Berardino, a middling second baseman from that era. Berardino went on the become an actor and, for decades, he played Dr. Steve Hardy on "General Hospital."

So now you know.

Not how you draw it up:Errors aren't that common in baseball these days. Fielders have continually improved over the course of history, with each generation proving to be more sure-handed than the one before it, albeit with better equipment and playing conditions.

That's what happened against the Rays on Wednesday. The Orioles committed a quintet of miscues and beat Tampa Bay 5-4 on Trey Mancini's two-run double in the ninth. Tim Beckham and Caleb Joseph each made two errors, and Jonathan Villar committed the other.

Baltimore had not won a game while committing five errors since June 9, 1983, when the Orioles beat Milwaukee 10-7 despite making six errors. That Orioles team went on to win the World Series. This one will not.

Bits and pieces:The Angels' Albert Pujols hit his 18th homer Wednesday, giving him 632 for his career. He's still 28 shy of matching Willie Mays for No. 5 on the all-time list. However, it was Pujols' 999th hit since he joined the Angels. With one more, he will become the ninth player to record 1,000 hits in both leagues. The others: Dave Winfield, Frank Robinson, Vladimir Guerrero, Fred McGriff, Carlos Lee, Alfonso Soriano, Carlos Beltran and Orlando Cabrera ... Boston won again, giving the Red Sox 81 wins in 115 games. In other words, the Red Sox could lose their last 47 games and still finish .500. They are the seventh AL team to win at least 81 of its first 115 games ... The Brewers clubbed back-to-back-to-back homers in the first inning of an 8-4 win over San Diego. It had been more than seven years since Milwaukee did that in the first inning of a game. The first of the homer burst was hit by Jesus Aguilar, giving him 28 to go with a team-high 82 RBIs. Aguilar's three-run blast came with two strikes. He has 50 two-strike RBIs this season. That's the most in the majors. His next one will break the franchise record, which he currently shares with Prince Fielder (2009).