Gold tabs on collars of past champs 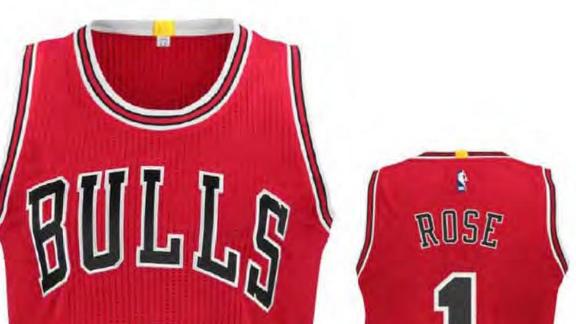 All NBA teams that have won a championship will wear a small gold tab on their back jersey collars starting with the 2014-15 season, according to images obtained from an adidas retail catalog that began circulating on the Internet on Tuesday afternoon.

The gold championship tab would be the first league-wide championship badge ever used by one of the "Big Four" North American professional sports leagues, and it is similar to the star system used by soccer teams to denote World Cup titles.

But while soccer teams add an additional star for each championship, the NBA plans to use a single tab for all teams that have won a title, so a one-time champion, like the Portland Trail Blazers, will wear the same badge as a team that has won many, like the Boston Celtics.

The gold tabs were announced on Twitter by Conrad Burry, who told ESPN.com that he obtained the images from an adidas catalog used by retailers for the 2014-15 season:

.@PhilHecken @sportslogosnet NBA teams will have a gold "mark" on the back collar if the franchise has a title: pic.twitter.com/oDwntb5mSK

- Conrad Burry (@conradburry) July 15, 2014The adidas catalog was then shared among several additional sources, including ESPN.com. In addition to the championship tabs, it shows that the NBA has the following uniform developments in store for this fall:

• The Pacers, Kings and Raptors will have throwbacks.

• The Celtics and Bulls will have sleeved jerseys for St. Patrick's Day.

• The Celtics' road jersey will now have "Boston" on the chest, instead of "Celtics."

• This season's edition of the Lakers' black "Hollywood Nights" jerseys will have sleeves.

• There will be no sleeves, however, for this season's Hispanic heritage jerseys.

• Several teams will have new "Pride" jerseys (much like the Pistons' "Motor City" design or the Blazers' "Rip City" design), although those jerseys haven't yet been shown.

The NBA did not immediately respond to a request for comment.