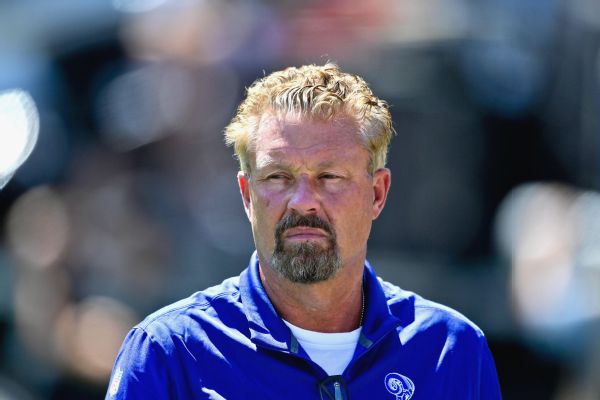 Williams' defenses make opposing offenses take "the long, hard route to score touchdowns," Jackson said in a conference call to discuss the hiring of Williams to replace Ray Horton, who was fired.

"I have a vision of what I want our defense to play like and look like, and I am going to get that. That is what I am looking forward to," Jackson said.

The move comes after the Browns finished 1-15 in Jackson's first season in Cleveland. Horton left the Tennessee Titans to join Jackson with the Browns in January 2016.

"I don't want anybody to take that this is just about Ray. This is really about my vision. It is about what I am trying to create here in Cleveland and how I see it and what I think it is going to take for us to get there," Jackson said. "This isn't just Ray. I know it looks like that. I know it looks like he gets caught up in it and however you guys want to say that, but it is not about that. It is bigger to me than that."

Jackson said he "agonized" over the decision but that he ultimately believed he needed his defense to improve quickly.

"If anybody, the finger is pointed back at me," he said. "It is not pointed at Ray. At the end of the day, the whole buck stops with me."

Williams had previously been the Los Angeles Rams' defensive coordinator, but after head coach Jeff Fisher was let go during the season, Rams assistants were free to seek other employment in the offseason while the team searched for Fisher's replacement.

"It's very exciting for me to become part of the Cleveland Browns organization and join Hue Jackson's coaching staff," Williams said in a statement. "I have so much respect for Hue having competed against him in this league for so many years. We're looking forward to getting to work."

As the defensive coordinator of the New Orleans Saints, Williams was suspended indefinitely in March 2012 for being the alleged mastermind of a system in which players received bonuses for, among other things, deliberately injuring opposing players. The scandal came to be known as "Bountygate.''

Jackson said he discussed Bountygate with Williams before deciding to hire him.

"Oh, we have had conversations about it, but I think that is behind him," he said.

"Obviously, he has already paid the price for that. I think that is behind him as well. We will not be having a Bountygate situation in Cleveland. We are here to try to do the best job we can of winning football games and putting the best football team that we can out on the football field."

Williams will be permitted to make changes on the Browns' defensive staff, Jackson said.

"I don't think you can expect a whole new defensive staff, but I am going to allow him to bring some guys who I think are going to help sell the message of what we are trying to create on defense," Jackson said.

Horton's defense had a number of inexperienced players, especially in the secondary, where several players tried to man the safety spot after the team let Tashaun Gipson go as a free agent and released Donte Whitner.

Jackson said he expects Williams will help the Browns' young players on defense "take the next jump" and "become huge contributing members to our football team."