Gruden: Hope no one jovial after loss 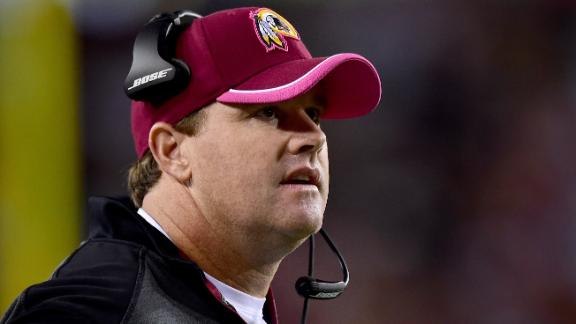 ASHBURN, Va. -- Redskins coach Jay Gruden said he doesn't want anyone feeling good after a defeat, whichis why he wants to check out reports of players laughing and joking around in the locker room following Washington's 27-17 loss to SeattleMonday night.

The Redskins' locker room was not as somber as it was following their 31-point loss to the New York Giants on Sept. 25. Laughter could be heard from the shower area and receiver Pierre Garcon and tackle Trent Williams, both team leaders, with the latter a captain, shared a laugh.

It might have been a team blowing off steam after a long week -- and one that felt better about itself than after their previous game. But Gruden wants to make sure it's not a team that's content with coming close against good teams.

"Our sense of urgency has to be code one right now. We don't have a lot of margin for error anymore. The type of guys we have I don't think any are satisfied with losing or accept losing. Hopefully they all want to win. It seems like they're competing their butts off."

Many players did not come across as being satisfied with losing, but there was an upbeat tone.

"Our guys played great," linebacker Brian Orakpo said. "We just didn't finish in the end. The effort was there, guys were making plays. There are no moral victories, but it's something to build on."

Gruden said he spoke with veteran safety Ryan Clark Tuesday morning about this topic, wanting to see if it was a legitimate issue. After the game, Clark said he was OK with the atmosphere, that every player handled losses differently. He did say in his previous stop,Pittsburgh, itwas different.

"If you lost it in Pittsburgh, it was a miserable feeling as a whole," he said. "Here, we're in the process of trying to build something and trying to understand how to win. We'll see how it goes next week."

Williams, who played with a partially dislocated knee cap that caused him to hobble at times even in pregame, said they wanted to quickly put the loss in the past.

"When the clock ticks zero, you can be mad all you want but it won't change the outcome," Williams said. "You just recognize your mistakes, get ready to get in the film room and get better. Losing is already miserable in itself, so after a game like this, man, we're professionals so of course it sucks. It's going to suck all night. But you wake up and your focus has to be on the next game."

The Redskins have lost 17 of their last 21 games dating to the start of last season. Monday was their third straight defeat.

"I know I wasn't upbeat," Gruden said. "I don't think anybody should have been upbeat right after a loss. There's no reason to be upbeat when you have someone come into your building and beat you. ... I'm hoping no one was jovial after a loss."