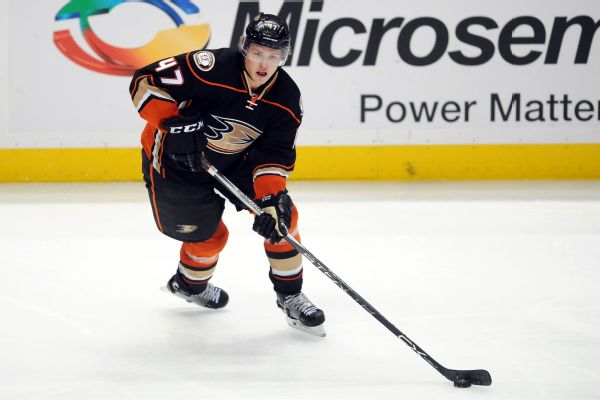 ANAHEIM, Calif. -- When Ducks general manager Bob Murray was set to reveal his team's injuries Thursday, he looked around and shouted for a staffer to bring him his list.

As it turned out, he was not exaggerating.

Both players tore their labrums. Their lengthy recoveries might affect the Ducks' offseason and the early part of next season.

"Hampus's hopefully four to five months. So into next year," Murray said. "And Sami's is worse."

Vatanen was visibly limited in the postseason. He had difficulty shooting the puck and making long passes after missing time during the first round. Other injuries were less obvious.

"Thompson played from early in the first series with a hairline fracture in his ankle. I'm sure you didn't know about that; we didn't tell anybody, of course," Murray said.

Boll was dealing with a back injury, according to Murray, who said "he did his job," which was the physical grind of delivering hits and creating energy as a fourth-liner.

Bieksa sustained a knee injury that he revealed to be a torn MCL. The injury will not require surgery and has improved since the Ducks were eliminated by the Predators on Monday.

"It's just starting to feel good now, which is the crappy part," Bieksa said.

Eaves had a deep bone bruise where his two ankle bones come together, which made it impossible to push off despite having tried a wide variety of skates and supportive boots. Murray said his recovery could take another month despite his efforts to return during the playoffs.

Centers Ryan Getzlaf and Ryan Kesler were among the many Ducks dealing with less serious ailments. Kesler in particular was the center of speculation, his performance dragging as the Ducks went deeper into the playoffs.

The Ducks had key injuries in the back end of the conference finals, which they lost 4-2 to the Predators. Already without 30-goal scorer Eaves, they lost leading goal scorer Rakell and starting goalie Gibson for Games 5 and 6, both to high-ankle sprains. Rakell did not travel to Nashville but might have been closer to a return, Murray said. Gibson skated before Game 6, for which he was ruled out by the training staff.