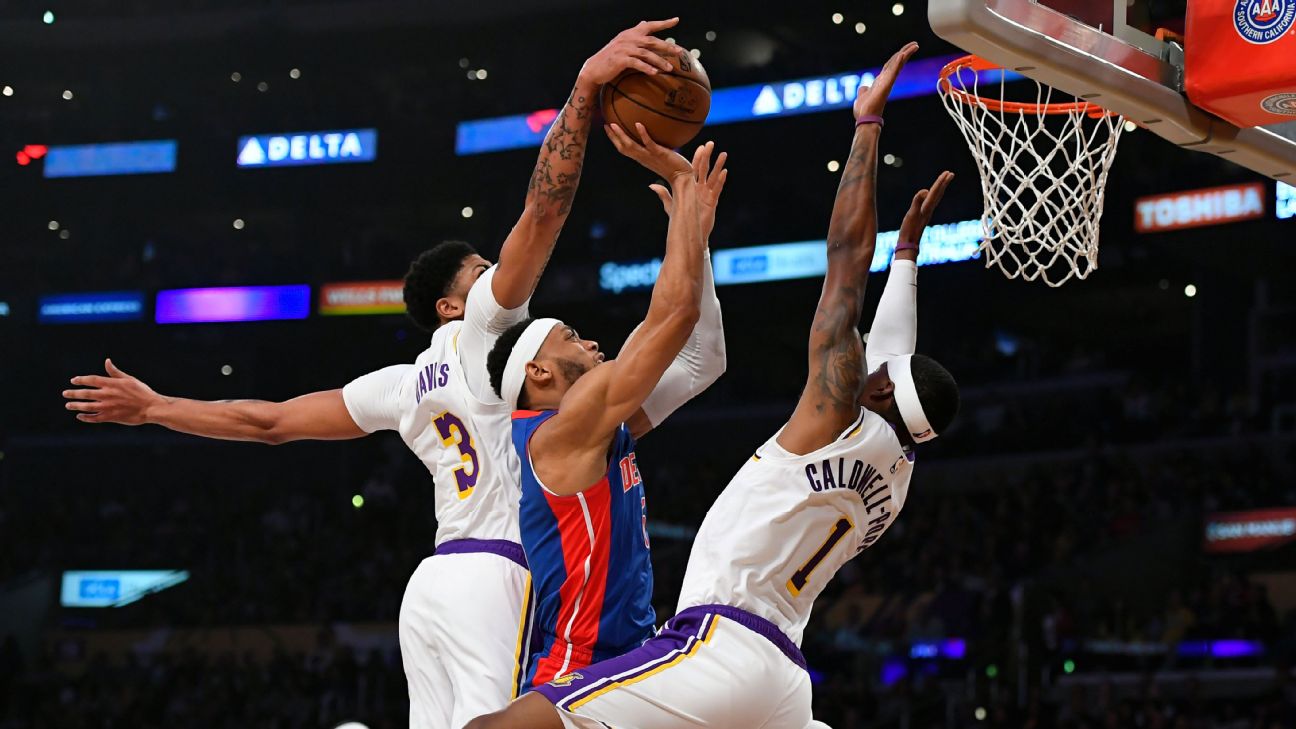 LOS ANGELES -- It had been almost 20 years since an NBA team blocked 20 shots in a game until the Los Angeles Lakers swatted everything in sight in their 106-99 win over the Detroit Pistons on Sunday night at Staples Center.

L.A. came into the night leading the league with 7.1 blocks per game, and Anthony Davis eclipsed that mark all by himself, registering a season-high eight rejections. JaVale McGee (six blocks) and Dwight Howard (five) also put up season highs in the category.

"I mean, I think it's just an unbelievable feat. A remarkable feat. Dwight, JaVale and AD, they just make it easy on us,"LeBron Jamessaid. "To know that you have that safety net behind you ... it's a heck of a luxury."

It became a laborious night for the Pistons as the Lakers blocked 25.6% of their shot attempts (20 of 78), making it the highest percentage of blocked shots in a game since blocks became an official statistic in 1973-74, according to research by the Elias Sports Bureau.

"Obviously it was a huge factor in the game," Lakers coach Frank Vogel said. "Our three big guys just played exceptional basketball. I think we as a group were not happy with giving up 68 points in the paint against the Pelicans. That was sort of the theme of our film session yesterday, and those guys took a lot of pride in protecting our rim tonight. Twenty blocks, that's pretty special. Those guys did a great job."

Detroit was limited to 32 points in the paint, a stark improvement from Friday night against New Orleans.

"They are No. 1 in the league right now blocking shots," Pistons forward Christian Woodsaid. "They showed that today, and they do a great job at it."

Davis and McGee became just the third pair of teammates with at least six blocked shots each in a game in NBA history. The last pair to do it were Dirk Nowitzki and Erick Dampier for the Dallas Mavericks on Jan. 29, 2005.

"I enjoy it because it gives our team a stop and allows us to get another possession in transition, so anytime I'm able to block a shot, I think it kind of uplifts our team," Davis said. "Not just me, but anyone. I think our bench gets hyped when one of our teammates do something special. And then we have fun with it, hence Dwight doing a finger wag."

Ah yes, the finger wag. Howard broke it out after erasing a point-blank attempt by the Pistons' 6-foot-11, 280-pound center Andre Drummond, mimicking the mocking celebration that Dikembe Mutombo, who is No. 2 on the all-time blocks list, made famous.

"I was just in the moment, trying to get the crowd going," Howard said. "It was just will, wanted it more. Andre's a tough guy to try and block in the paint. He's really quick off his feet."

Vogel wished Howard's finger wag were a little quicker, too.

"I don't mind it. I just think he stayed in it a second or two too long. We were running on a break," Vogel said. "But I don't mind that."

Davis didn't dock Howard points for the length of his celebration, rather for the lack of creativity.

"He's a great shot-blocker," Davis said. "I told him, he has to be a little more original; he has to come up with his own thing."

The 20 blocks were the most by any team since the Toronto Raptors blocked 20 shots on Nov. 7, 2001. And it was the second most in history by the Lakers, falling one short of the franchise record of 21 on April 9, 1982, against the Denver Nuggets.

McGee seemed to suggest in a postgame tweet that the league took special interest in his performance with a drug test.

The Lakers have been challenged by Vogel to "dominate" and "kill" their opponents during this homestand, which has already featured the likes of Phoenix, New Orleans and Detroit and will continue with the New York Knicks, Cleveland Cavaliers and Orlando Magic in the next two weeks. For them, the block party personified their coach's urging.

"I feel like for the other team, it's a low esteem [feeling], you know what I'm saying? It depletes their whole energy," McGee said. "It's just like, 'Damn, we can't go to the rim. Let's start shooting contested 3s instead.' ... So it's definitely great."

"Great" is an apt way to describe the Lakers, winners of five straight and owners of the best record in the Western Conferenceat 29-7.

"We're a hard-nosed team," McGee said. "We dunk everything. We don't let things come to the rim. We block shots. That's what we do." 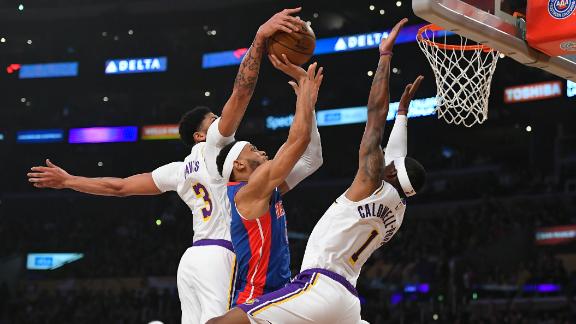