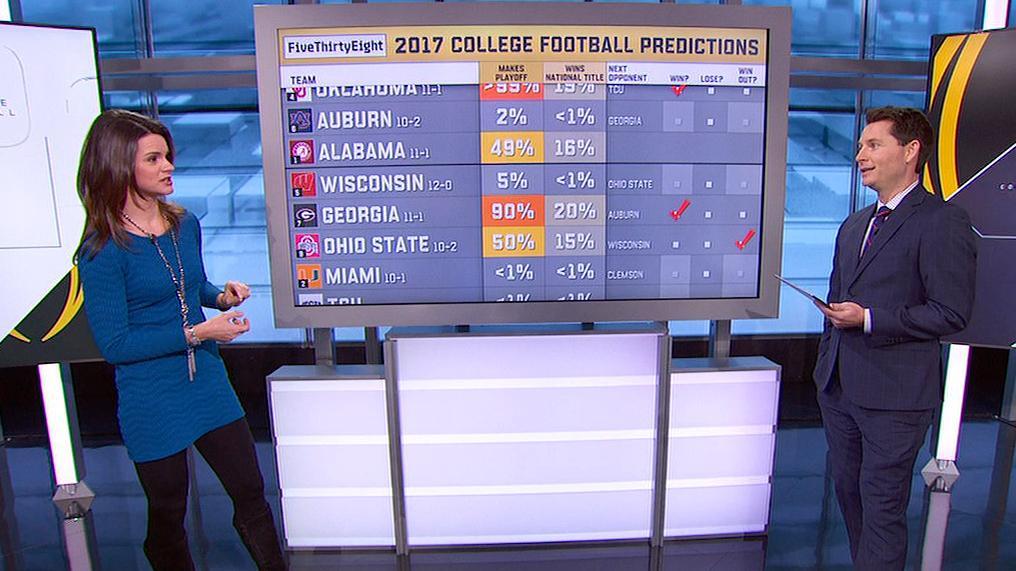 Nick Saban took to the podium afterAlabama'sloss to Auburnin the Iron Bowl on Saturday and called the only possible play he had left: He lobbied.

Alabama will likely fall out the College Football Playoff top four for the first time when the new rankings are revealed Tuesday night (7 p.m. ET on ESPN and ESPN App). With no conference championship game to play in this weekend, that means the Tide will need help if they're to avoid missing the playoff for the first time.

The fates of Alabama and Ohio Statepresent the most interesting scenarios entering championship weekend, with the potential to cause the most difficult decisions for the 13-member selection committee. The champions of the ACC and SEC are most likely locks, and if Wisconsinand Oklahomawin the Big Ten and Big 12 title games, respectively, there won't be much drama on Selection Day on Dec. 3. If they don't both win, though, then the debate will turn to teams such as the Tide, the Buckeyes and perhaps other contenders.

Here's a look at three scenarios that could play out on championship weekend:

Case for No. 4: Alabama, Ohio State, ACC loser, USC
The ACC loser, whether it be Miamior Clemson, would have two losses, and it is a stretch to think the committee would reward a two-loss conference runner-up. Miami would likely be out, riding a two-game losing streak, but Clemson could at least make a case with its seven wins against teams above .500. Four of those opponents have won at least eight games, and Clemson could wind up with a win over the SEC champ if it's Auburn. The problem with USC is that, even with a Pac-12 championship, the Trojans' best and only ranked wins would be over Stanford(twice).

The debate would boil down to Alabama and Ohio State. The best argument for the Tide is that they were ranked No. 1 or No. 2 by the committee through the first four rankings in spite of a strength of schedule ranked No. 47. The Tide pass the eye test and have the metrics to prove it: They are the only FBS team to rank in the top five in offensive and defensive efficiency.

Alabama's best win, though, is against No. 18 LSU, which wouldn't compare to an Ohio State win over undefeated Wisconsin, or even to the Buckeyes' win against No. 10 Penn State. Ohio State would have the betterrésumé, but would the committee consider how consistently good Alabama has looked on the field and choose the Tide?

The best comparison for Ohio State's résumé would be Penn State's in 2016. The committee is wrestling with Ohio State's 55-24 loss to Iowa, just as it did with Penn State's 49-10 loss to Michigan last season. Don't forget, the two-loss Nittany Lions beat Wisconsin that year to win the Big Ten championship and it wasn't enough. It's a different year, with different résumés, but the losses and Big Ten title would be comparable.

Although it's tempting to compare Alabama'srésumé to Ohio State's in 2016, when the Buckeyes finished in the top four despite not winning their division, don't forget that the Buckeyes' nonconference win over Oklahoma carried a lot of weight with the committee. The Tide do not have a similar marquee win in or out of conference.The better comparison for Bama might be the 2015 Ohio State team, which might have been the most talented team in the country but didn't make the playoff because of one loss.

Case for No. 4: Alabama, TCU, ACC loser, USC
Let's see whether TCU is ranked ahead of Alabama on Tuesday night. Forget the top four: Does the committee think TCU is a top-10 team heading into the Big 12 title game?

The Horned Frogs have been ranked No. 12 in each of the past two weeks. How much ground will the committee ask them to cover to get into the top four with a win over Oklahoma? And you thought TCU's falling from No. 3 to No. 6 in 2014 was shocking.

TCU winning the Big 12 might be the best-case scenario for Alabama because the Tide would like their chances when being considered alongside the Horned Frogs. TCU would boast wins over the Sooners and Oklahoma State, but it might be as simple as the committee thinking Alabama is the better team.

The committee could also consider a two-loss Clemson that loses a close game to Miami, only because the Tigers have seven wins against teams with winning records, including five opponents with at least eight wins. Would the committee really favor a two-loss runner-up, though, over a team like TCU that had just upended a top-four team in Oklahoma? Or even one-loss Alabama? USC would be another title contender, but the only ranked win it would have is Stanford. It's worth watching tonight to see how high USC and Stanford are ranked for a better idea of how seriously -- or not -- to take the Pac-12.

Case for 3-4: TCU, Ohio State, Alabama, USC, Wisconsin
The entire conversation has been wrapped around the debate between Ohio State or Alabama.

This scenario allows for Ohio State and Alabama.

With at least three two-loss Power 5 conference champions in the mix, and a fourth possible if Auburn wins the SEC, this would be the best-case scenario for both Alabama and Ohio State to join the top four. The Trojans would still have the weakest résumé and least impressive championship-game win, so it's hard to imagine the Pac-12 figuring into the committee's top-four deliberations.

A one-loss Wisconsin would be easy for the committee to eliminate because (a) it would lose the head-to-head to the Buckeyes, and (b) its best win is against Northwestern. It's highly unlikely the committee would choose a one-loss Wisconsin over a one-loss Alabama, neither of which won their league title. So if Wisconsin and USC are eliminated from the debate, we're back to the TCU-Ohio State-Alabama discussion, which boils back down to -- you guessed it -- Ohio State and Alabama. If only there were a way they could settle it on the field ...

This is the one scenario in which they just might. 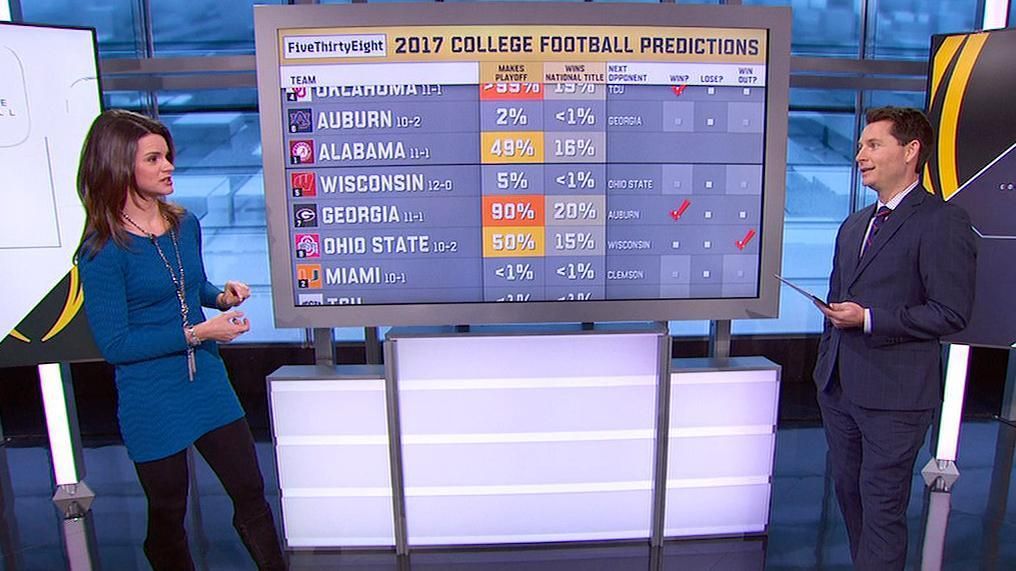