'I made a promise to them that I'd win it': Winners from MLB's All-Star Week 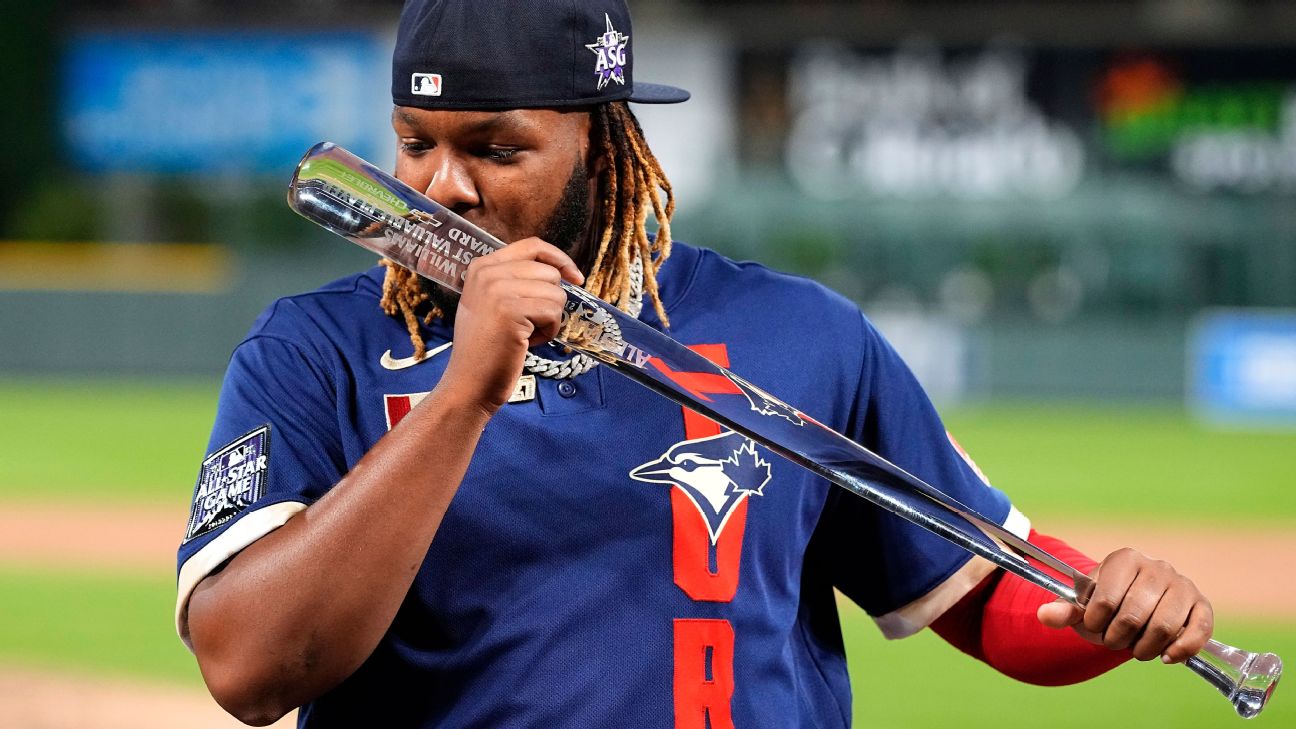 DENVER -- Tuesday's bottom of the first began with Fernando Tatis Jr., arguably the most magnetic star in the sport, digging in againstShohei Ohtani, undoubtedly the most unique talent in baseball history. A quick acknowledgement was followed by two fastballs, then a slider, then a splitter, then another slider. Ohtani induced a fly out. Tatis returned to the dugout in bewilderment.

"He gave me everything!" Tatis exclaimed. "I thought he was gonna give me only fastballs. Come on, man -- you throw a hundred!"


A dark cloud has hung over Major League Baseball over these past few weeks. Incessant talk about the industry's issues with foreign substances was followed by hideous sexual assault allegations against the sport's highest-paid player, all within the backdrop of interminable concern about baseball's future.

But sometimes the game takes over and nothing else seems to matter.

Sometimes the balls fly, the personalities come out, the young stars emerge and the hype that surrounds these major events is actually realized. This All-Star Game -- won by the American League by a 5-2 score -- provided that. It was a much-needed break from the troubles that ail this sport, perhaps even an acknowledgement that some of them might be overblown. It was also an emphatic representation of life normalizing amid the COVID-19 pandemic, demonstrated by the electric crowds that filled Coors Field over these past two nights.

"Baseball is back," Tatis declared. "The real energy, the real vibe."

This All-Star Game, and the events that surrounded it, had a lot of winners, none more so than the fans.

Here are five others.

Vlad Jr. cracked this list simply with his glove.

Then he hit a 1-1 slider out over the plate from Corbin Burnes and smoked a 468-foot home run, the longest at the All-Star Game in 10 years. It was his second batted ball at 110-plus mph, and it came 15 years after his father's All-Star Game homer, making them the third father-son duo to accomplish that feat, alongside Bobby and Barry Bonds and Ken Griffey Sr. and Ken Griffey Jr. At 22 years and 119 days old, it made him the youngest player to homer in the All-Star Game since Johnny Bench. Ultimately, it also won him the MVP.

Guerrero's teammates, Lourdes Gurriel Jr. and George Springer, told him Friday that if he's going to the All-Star Game, he might as well just win the MVP.

"I made a promise to them that I'd win it," Guerrero said in Spanish, "and thankfully I'm bringing it back."

All-Star Week doubled as a celebration of Ohtani's unprecedented first half. Cameras followed him everywhere he went. Fellow players gawked at his exploits. Media members crowded around the dugout, waiting for him to merely venture outside. Ohtani headlined a star-studded event, and somehow he did not disappoint.


On Monday, he engaged in an epic showdown with Juan Soto, amassing 28 home runs -- 15 of which traveled 475-plus feet and six of which reached 500. Ohtani ultimately lost in the third tiebreaker, then slept in until 10:30 a.m., arrived at the ballpark a few hours later, hit in the batting cages and stepped onto the field around 5:30 p.m. to begin his pre-start warmup.

In the top of the first, Ohtani had a base hit taken away from him. In the bottom of the first, he retired Tatis, Max Muncy andNolan Arenadoin order, the latter of whom saw back-to-back 100 mph fastballs.

By the end of the night, fittingly, Ohtani was the game's winning pitcher.

"It was definitely more fun than nervous," Ohtani said through his interpreter. "I definitely want to be back at the All-Star Game."

His excellence is almost indescribable, but Freddie Freeman made a valid attempt at capturing it:

"I don't even understand how the brain can flip flop from, 'I gotta get three outs, and then I gotta go score a run for myself.' I don't understand that in a big league ballgame. Any time he's on the field, you're just amazed that he has the energy, the mental energy, to handle that. I watch the guys pitch. When they pitch, the game-planning that goes on in the games -- he's game-planning and then having to hit batting practice in the cage. He's got literally a 12-hour day every day. It's amazing, because then he throws so many pitches, then you have to do your arm care the next day, you have to get all the lactic acid out of your body, and then you have to go DH at night. Every day, I'm amazed. I really am. I'm just happy that someone's doing it. I don't know if anybody's gonna ever do it like Shohei is doing it, but at least that door has opened that maybe we'll at least let people try a little bit more."

Arenado jerseys decorated Coors Field over these past two nights, a persistent reminder of what was lost on the first day of February, when a mismanaged Colorado Rockies franchise dealt their marquee player to the St. Louis Cardinals.

This week, though, Arenado was locker mates with former teammate Trevor Story, and for a brief moment in time, it felt as if nothing had changed.

"It's like he never left," Story said Monday afternoon. Hours later, Arenado served as Story's hype man for the Home Run Derby, keeping him hydrated and pumping up the crowd during intermissions. The following afternoon, Arenado, returning to Coors Field for the second time this month, was introduced to a raucous ovation.

"He needed that," his former teammate, Rockies starter German Marquez, said in Spanish.

Arenado called it "one of the better things I've ever had in my life, in my career. I'm very thankful for it."


Arenado grew up and became a star in Denver. For eight years, from age 21 in 2013 to age 29 in 2020, he established himself as arguably the game's greatest third baseman. He was a magnificent defender, a ferocious hitter, an upstanding presence. And yet part of him was uncertain about how that would be appreciated.

"I think we can all understand that," Arenado said. "Sometimes when you do the work, and you do good work, sometimes it doesn't get noticed. Sometimes you wanna be appreciated for what you did. And that's in everyday life. It could be anything. You do something with somebody, you want them to say thank you, I guess, in a way. Not that I want them to say thank you, but the fact that they did it means a lot."

Mancini was an inspiration. He spent the 2020 season undergoing biweekly chemotherapy treatments in his recovery from Stage 3 colon cancer, fought his way back, lost a dear friend to brain cancer along the way, earned an invitation to the home run-hitting contest and nearly won the whole thing.

"I think it can set an example that you can go back to your normal life, even if you have this thing hanging over you sometimes," Mancini said. "That's the message that I really wanted to get across."

Alonso was a force of nature. He exuded confidence throughout the night -- declining sips of Gatorade, hyping up the crowd during timeouts, continually bopping his head to New York hip-hop and swinging a flamboyant bat that contained his life story. Alonso owned the event, becoming the third back-to-back derby winner of all time. Afterward, he declared himself "the best power hitter on the planet."

Hendriks didn't know he was still mic'd up as he navigated through the ninth inning. He could no longer hear the FOX broadcast, so he thought he was in the clear. And so he pitched the way he normally would -- which meant a lot of cursing on national television.

Hendriks' ninth inning was an event. He mixed in a knuckleball, just for fun, and worked around a couple of hits to finish the game. As ESPN's Marly Rivera pointed out: The All-Star Game's winning pitcher was a Japanese two-way player. The MVP was a 22-year-old from the Dominican Republic. And the save went to a 32-year-old from Australia.

It happened in the wake of myopic comments about Shohei Ohtani's grasp of the English language, in an event that had been moved due to concerns over voting laws that allegedly hindered minorities -- and it was perfect. 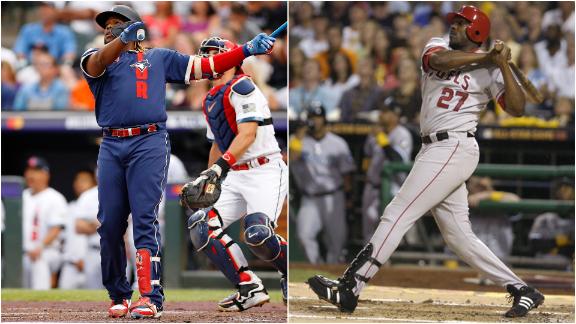 Like father, like son: Vladdy homers in ASG 15 years after his dad
Check out Vladimir Guerrero Jr.'s 468-foot blast at the 2021 All-Star Game, then flash back to his dad's homer in the Midsummer Classic in 2006. 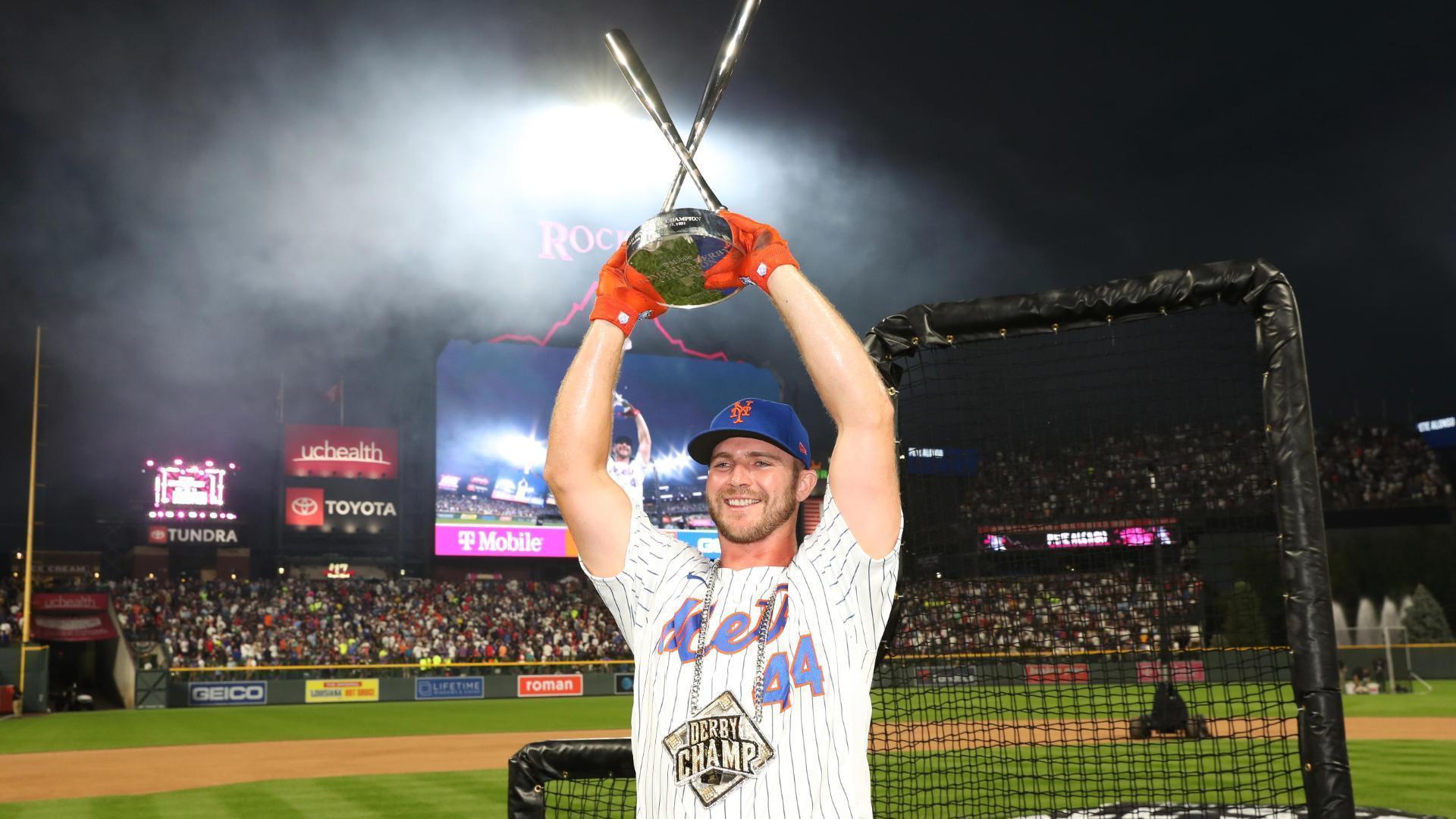