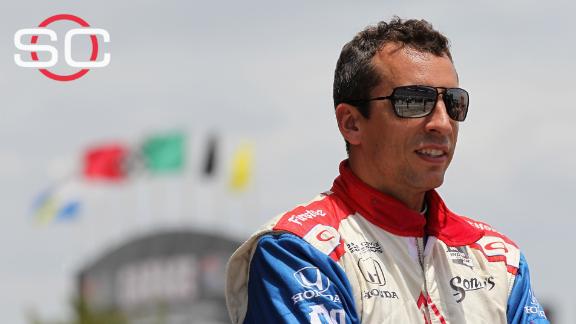 Justin Wilson, who had seven victories in a 12-year career in U.S.-based open-wheel circuits, died Monday. He was 37.

IndyCar made the announcement Monday night at Indianapolis Motor Speedway.

The Englishman was competing in his sixth race this year for Andretti Autosport. What had originally been a two-race deal for both Indianapolis Motor Speedway events was recently expanded to include the final five races of 2015.

Wilson was airlifted to Lehigh Valley Hospital-Cedar Crest in Allentown, Pennsylvania, on Sunday evening with a head injury, after it appeared he was struck on the helmet by debris from Sage Karam's one-car crash, which occurred in front of Wilson on the track.

With Wilson possibly unconscious, his car speared at nearly unabated speed into an angled wall protected by a SAFER barrier on the inside of the exit of Turn 1, near a gap in the wall where safety vehicles enter the track.

"Can't even begin to describe the loss I feel right now. He was my brother, my best friend, my role model and mentor. He was a champion!'' Wilson's younger brother, Stefan, also an IndyCar driver, tweeted.

Wilson was known among drivers as a gentle giant. Soft-spoken and deeply analytical, Wilson was one of the most popular drivers, and his strong, technical ability in suggesting tweaks to help the car perform better was evident in the Andretti team's recently improved form. Wilson finished second in the IndyCar race at Mid-Ohio Sports Car Course on Aug. 2 in his last event before Pocono.

"Justin's elite ability to drive a race car was matched by his unwavering kindness, character and humility -- which is what made him one of the most respected members of the paddock,'' said Mark Miles, CEO of Hulman & Co., the parent company of IndyCar and Indianapolis Motor Speedway.

Dale Earnhardt Jr.and Danica Patrick were among the NASCAR drivers to tweet their condolences to Wilson's family on Monday.

Wilson, who grew up in Woodall, a town in England's Yorkshire region, started his racing career in go-karts at age 9. He spent the 2003 season in Formula One driving for Minardi and Jaguar before moving to the United States, where in 2004, he began competing in the Champ Car-sanctioned IndyCar series for Conquest Racing.

In 2005, Wilson joined the start-up RuSPORT team in Champ Car and scored that organization's first race win at Toronto. Wilson achieved all four of RuSPORT's race wins from 2005 through 2007, and he finished second to Sebastien Bourdais in the 2006 and '07 Champ Car points standings.

In 2008, Wilson appeared to have finally landed his big break. He signed with Newman/Haas Racing to replace Bourdais when the Frenchman switched to Formula One. Typical of Wilson's luck, his car's gearbox broke after he led from pole position at Long Beach in his Newman/Haas debut in what was the last race for the Champ Car formula in April 2008.

NHR joined the unified IndyCar Series for the remainder of the 2008 season, and with a victory at the Detroit Belle Isle Grand Prix, Wilson led ex-Champ Car drivers in the IndyCar Series standings. But Newman/Haas downsized after team co-founder Paul Newman died, and Wilson was left without a ride.

He landed with Dale Coyne Racing in a marriage of convenience that worked out well for both parties. Wilson earned DCR's first IndyCar race win at Watkins Glen in 2009, undoubtedly one of the sport's best feel-good stories of the past 20 years. Returning to the Coyne team after two years with Dreyer & Reinbold Racing, Wilson added another win in 2012 at Texas Motor Speedway.

Although Wilson was regarded as one of the most talented drivers in IndyCar racing, tough luck seemed to follow him throughout his career. He had the backing of Honda but could assemble only a part-time schedule for 2015. His midseason arrival appeared to spark the Andretti team, with Ryan Hunter-Reay winning at Iowa Speedway and again at Pocono, in the race in which Wilson lost his life.

Wilson made 174 career starts in IndyCar and Champ Car. He earned eight career poles, 47 top-five finishes and 94 top-10s. Wilson was also part of the winning team at the 2012 Rolex 24 at Daytona, where he drove for Michael Shank Racing withAJ Allmendinger, Ozz Negri and John Pew.

Andretti Autosport called Wilson "a tremendous racer, a valuable member of the team and respected representative to our sport.''

"While Justin was only part of the Andretti lineup for a short time, it only took a second for him to forever become part of the Andretti family,'' the team said. "His life and racing career is a story of class and passion surpassed by none. Our thoughts and prayers remain with the Wilson family and fans worldwide. Godspeed, JW.''

Ed Carpenter, the only driver/owner in IndyCar and the stepson of IndyCar founder Tony George Jr., attended the announcement and spoke of the respect Wilson commanded throughout the paddock.

"Days like this are extremely hard on all of us,'' Carpenter said. "Justin was a great professional driver and extremely good at his craft. Beyond that, he was a great guy. One of the few, if only, guys who really was a friend of everyone in the paddock. Everyone respected him for the way he carried himself."

Wilson is survived by his wife, Julia, and children, Jane and Jessica.

"Justin was a loving father and devoted husband, as well as a highly competitive racing driver who was respected by his peers," the family said in a statement posted on his website. "The family would like to thank the staff at the Lehigh Valley Health Network Cedar Crest Hospital, Pocono Raceway, Andretti Autosport and the Verizon IndyCar Series, as well as the entire racing community for the amazing outpouring of support from fans around the world."

Stefan was following in the successful footsteps of Justin, who at age 20 was a finalist for the 1998 McLaren Autosport British Racing Drivers' Club Young Driver of the Year. In 2001, Wilson won the FIA Formula 3000 title at age 13. He was the first British driver to do so.

The tallest IndyCar Series driver, at 6-foot-4, Wilson shared his story of growing up with dyslexia in hopes of encouraging children to work to overcome the reading disability.

"I knew from an early age this is what I wanted to do," Wilson said of racing in a 2012 Associated Press story. "It's the one thing that came easier to me than anything else.

"Sure, you've still got to work at everything in life. But this thing came easy, whereas everything else -- all my schoolwork, even soccer at school -- it just wasn't easy. And racing always was."

Justin Wilson's family asked for donations to a trust fund for his daughters in lieu of flowers.