Injuries, expansion and failed expectations could mean different Ducks for next season 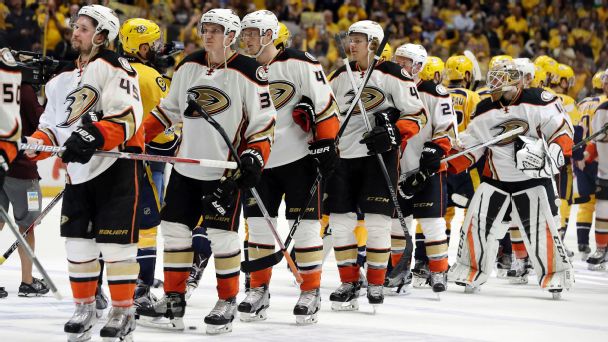 ANAHEIM -- In the bowels of the Honda Center, two words reverberate loudly once again for the Anaheim Ducks: What next?

"It just hasn't quite worked in those two circumstances, so why?" general manager Bob Murray said. "We're going to have to identify certain areas, 'OK, why didn't it work? Should we be maybe changing a player or two?'"

The repetitiveness of their playoff results has not been for lack of tweaking their roster. Only four players have been on all five Pacific championship teams: captain Ryan Getzlaf, former Hart Trophy winner Corey Perry, iron man Andrew Cogliano and No. 1 defenseman Cam Fowler.

After losing four straight Game 7s at home under coach Bruce Boudreau, the Ducks turned once more to Randy Carlyle, who coached them to a Stanley Cup in 2007. Although he delivered a Game 7 win at home against the Edmonton Oilers in the Western Conference semifinals, the Ducks fell in six games in the West finals to the Nashville Predators, the team with the worst regular-season record to qualify for the playoffs. In Game 6, they outshot Nashville 41-18 but still were defeated 6-3. Center Ryan Kesler and defenseman Kevin Bieksa, both of whom suffered through a Game 7 loss in the Stanley Cup finals with the Vancouver Canucks in 2011, said it was the most devastating loss of their careers.

"This season, I just felt like we deserved better," Bieksa said. "I felt like we were the better team for a lot of series, but we didn't, obviously, get the job done when it counted."

Murray said he, Carlyle and top consultant Dave Nonis had a three-hour meeting to address special teams, as both the penalty kill and power play were less than dependable in the playoffs. Also related to sputtering special teams were lengthy upcoming discussions regarding the future of the team's assistant coaches.

Murray has continued to develop young talent, particularly in reshaping his back end with fluid skaters and deft puck movers, the fashionable archetype for today's NHL defenseman. That shift proved essential in the playoffs for both his club and Nashville's, whose mobile, similarly constructed top four has helped catapult them to the finals.

"We're transitioning pretty well. I think our D are, with the younger guys we brought in, they're as good as anyone in the league with the puck and they can skate," Cogliano said, emphasizing the evolving versatility of the heavy, physical Ducks. "[Nashville] was really hard to play against through the neutral zone, but our back-end speed created a lot of problems for them."

Murray's first task, like all NHL GMs, will be tackling the expansion draft. The Ducks' roster essentially dictates that he protects seven forwards, three defensemen and a goalie. Murray has prioritized defense, and two of his top blue-liners, Hampus Lindholm and Sami Vatanen, will both undergo surgery and face recoveries that extend into next season. Murray intimated that those injuries might limit his ability to thin out his defense, and also that he had spoken with Vegas Golden Knights GM George McPhee to make a move that would absolve the Ducks of their obligation to lose a player in the expansion draft to not expose any of his promising rearguards.

At forward, the Ducks have diversified their assets, and that has been timely. This season saw a big drop-off for Perry, who had taken the mantle from Teemu Selanne as the team's top goal scorer. He finished fourth on the team in goals and posted his lowest goals-per-game total since 2006-07. Murray said he felt Perry's lower-body strength needed to be addressed and that his participation in the World Cup of Hockey might have limited his ability to do so last summer. Carlyle also addressed, implicitly, Perry's diminished role.

John Gibson, injured and sidelined for the Ducks' final two games and for a stretch of the regular season, has emerged as a legitimate No. 1 goalie. He still needs to prove he can remain healthy for a full campaign.

"He's matured in so many areas, that's just another thing that we're hoping that as time progresses and we move forward," Ducks goalie coach Sudarshan Maharaj said during the playoffs.

Much like the Ducks have added speed on defense to better handle uptempo opponents, they previously added depth at center. After being pummeled in a Game 7 by the deep-down-the-middle Los Angeles Kings in 2014, Murray brought in Kesler. The Kings have since faded into relative obscurity, and while Kesler has been an asset, he neither contributed offensively nor stifled the Preds' top players in the conference finals. The Predators' top line persisted and produced, while Kesler scored just one goal in 17 games after scoring 21 during the regular season.

"It wasn't for a lack of effort. If people know me, they know I put a lot of pressure on myself to compete," Kesler said. "Some games [our line] played a little too defensive and worried about the other team too much, [rather] than playing our game. I thought we did a decent job defensively, but the offense wasn't there. "

The Ducks have very little in the way of unrestricted free agents, most notablyPatrick Eavesand backup goalie Jonathan Bernier, who performed poorly in his first-ever playoff start. Eaves said he would love to return. Despite potential mutual interest, Eaves, who has played on a series of short-term contracts of late, likely will be lured away by the prospect of a multiyear deal and a salary increase in what figures to be a thin free-agent market.

Despite the acrid taste in the players' mouths, mutual confidence was expressed to a man regarding the team's coach, general manager and current roster.