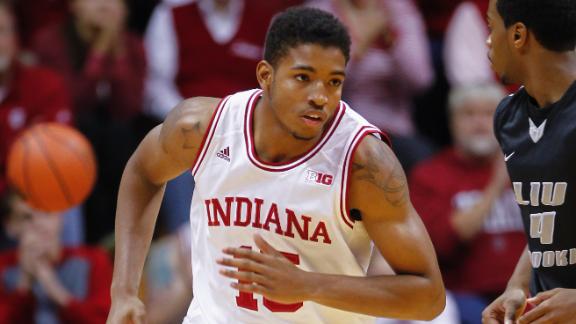 BLOOMINGTON, Ind. -- Indiana forward Devin Davis was mostly to blame for the car accident that sent him to a hospital with a head injury, police said Monday.

According to the police report, Holt said he had driven Davis to a parking lot at the football stadium. Holt told police that when he started to drive away, Davis "jumped" in front of the car. Police cited "pedestrian's action" as the primary cause and said both players had been drinking.

Initially, Davis was listed in serious condition, but he has been making progress. On Sunday, team doctor Larry Rink said Davis' speech was "normal" and he had use of all extremities. Team spokesman J.D. Campbell did not update Davis' condition Monday.

Holt is an 18-year-old freshman from Webster, New York, and Davis is a 19-year-old sophomore from Indianapolis.

Holt was cited for illegal consumption, a misdemeanor, and operating under the influence of alcohol under age 21. The team said Holt had a blood-alcohol level of 0.025, below the legal limit of 0.08 for people 21 or older. Davis has not been cited.

"Emmitt made a couple poor choices. It's not about what his blood-alcohol was or wasn't. He's underage. He shouldn't have been drinking and he shouldn't have gotten behind the wheel of a car," Crean said. "Does he have to live with the consequences, that could have happened to anybody? He has to live with that ... and we'll protect him as much as possible, but I'm going to sit him for four games."

"We also had a couple of other bad choices made this summer," Crean said. "We're not a program that waits for this or that. They made those bad choices. The rules say they sit a certain amount; well, I say they sit more. Stanford Robinson and Troy Williams, they're also going to sit for four games.

"We have to grow up, as a unit, as a group of young men. As I tell them all the time ... you get to make your own choices, but you don't get to pick your consequences."

"Devin is not only a teammate, but a great friend and it pains me to know that I have caused him harm," he said. "I sincerely regret my actions, and I understand that I must be held accountable to the high standards that coach Crean and IU have set for all of us. I want to apologize to coach, to my teammates and to the entire IU community for not living up to the expectations that this program and university deserve. I will work hard in the coming days, weeks and months to become a better man and teammate."

Davis' parents said in a statement issued by the school Sunday night that "there is a road to recovery ahead."

"We want to thank the incredible team at IU Health Bloomington Hospital for taking such great care of Devin," the statement said. "We also want to express our gratitude to coach Crean, who has been by Devin's bedside for most of the past two days and to all of his coaches, teammates and the extended Hoosier family who have kept him in their prayers."

The injury could have a significant effect on a team already inexperienced and undersized in the post entering its Nov. 14 opener against Mississippi Valley State. The 6-foot-7 Davis was expected to help solidify the middle after averaging 2.4 points and 2.6 rebounds in 8.8 minutes a game last season. Only four players on the roster are taller than Davis.

The accident adds to the team's offseason turmoil. Three players transferred, one left early for the NBA and four walk-ons did not return.

In September, junior guard Yogi Ferrell and Robinson entered pretrial diversion programs after being charged in April with alcohol consumption by a minor and possession of false identification. Junior forward Hanner Mosquera-Perea was arrested in Bloomington in February on preliminary drunken driving charges.

Asked Monday on his radio show how he feels when people put the blame for all of this on leadership and subsequently him, Crean responded:

"That's your prerogative. You're more than welcome to put that on me. It doesn't change how I want to do things or am trying to do things. That's part of my job and part of my responsibility, and whatever anyone else is feeling fails in comparison to what I am feeling myself."

ESPN.com's Jeff Goodman and Dana O'Neil and The Associated Press contributed to this report.