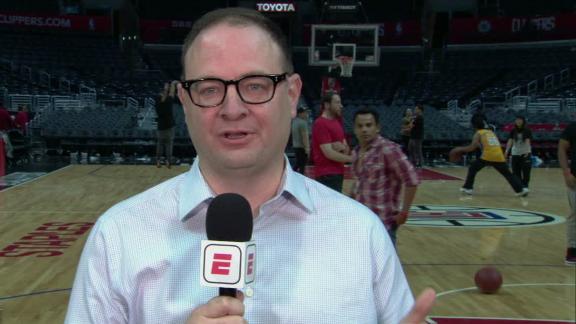 LOS ANGELES -- In the aftermath of a cantankerous loss, Houston Rockets forward Trevor Ariza and stars Chris Paul and James Harden marched through a back corridor and into the LA Clippers' locker room late Monday night, suggesting that they wanted to confront Clippers players Austin Rivers and Blake Griffin, league sources told ESPN.

Rockets guard Gerald Green joined Ariza, Paul and Harden through the connecting hallway and breached the entrance of the home team's locker room.

Stunned Clippers players, celebrating a 113-102 victory, leaped to their feet upon the realization that four seething Rockets players had come calling for them, sources told ESPN.

For a few fleeting moments, several Clippers dared the Rockets to come farther into the room, sources said. Security and team officials soon converged on the Rockets, pushing them out the door and back toward the visiting locker room, sources said. Ariza was described as the first one through the door, with Paul lingering in the back, witnesses told ESPN.

"It was classic NBA," one Clippers witness told ESPN. "None of these guys were going to fight."

Harden was sitting out his seventh straight game with a strained hamstring on Monday night, and Rockets sources believe that he'll be ready for a return to the lineup on Thursday night against Minnesota.

NBA officials started an investigation immediately after Monday night's game, and continued gathering information among the Clippers, Rockets and security officials on Tuesday, league sources said. There's an expectation that a determination from the league office on potential suspensions or fines won't be made sooner than Wednesday, because of the sheer volume of potential transgressions that need to be probed.

"We were where we were supposed to be," Griffin said. "We were in our locker room. So whatever happens over there, I mean, we can't control what anybody else does. We control what we did. Everybody was in our seats. That's it. You should ask them."

The Clippers' coaching staff was in a separate room, heard the ruckus and rushed out --- only to see its former point guard, Paul, getting pushed back out and into the hallway, sources said. On a night that the Clippers organization played a video montage to honor Paul's six seasons here, the fractured relationships that led to his departure in June percolated in the raucous fallout of the night.

The Rockets players were filled with a greater animus for Rivers, sources told ESPN, because they insist that he had been especially belligerent from the bench in the late stages of the Clippers' victory. Out with an ankle injury and wearing a suit, Rivers was reveling in Griffin's dominant performance of 29 points, 10 rebounds and 6 assists. Once Griffin became entangled with several Rockets, Rivers' verbiage appeared to become more aggressive.

Griffin unleashed on the Rockets in the final minutes of the game, brushing past Mike D'Antoni and inspiring the Rockets coach to scream "F--- you" at him. Griffin fired a loose ball off the back of Eric Gordon as the Clippers star was falling out of bounds, and seconds later, he engaged in a skirmish with Ariza that led to double technical fouls and an ejection with 1 minute, 3 seconds left.

On his way off the court and toward the tunnel that leads into the locker room, Griffin high-fived his Clippers teammates, ripped off his No. 32 jersey and tossed it into the stands. Clippers owner Steve Ballmer stood a few feet away, howling with the crowd.

As the drama unfolded later, Rockets center Clint Capela walked down the main corridor and banged on the front entrance to the Clippers' locker room, league sources said. Soon, a Clippers staff member opened the door and looked up to see Capela, a formidable 6-foot-10 figure, standing in the doorway.

She shut the door in Capela's face. For a few moments, Capela stood there, unsure how to proceed. Before long, Capela walked back to the Rockets' locker room, showered and headed for the bus with the rest of the Rockets.