Jason Garrett to get five-year deal 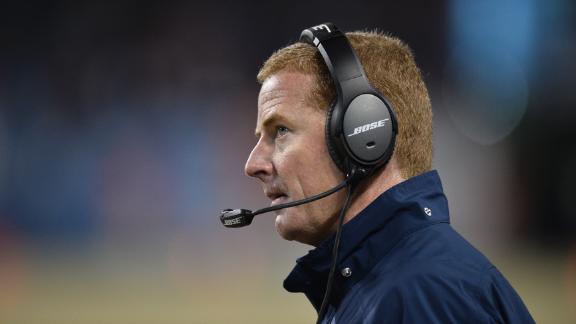 The Dallas Cowboys are on the brink of a new five-year contract agreement with Jason Garrett to remain the team's head coach, sources tell ESPN's Chris Mortensen.

A team source told ESPN's Ed Werder of the deal: "It's not done, but close."

Garrett led the Cowboys to the playoffs this season for the first time since 2009 with a 12-4 regular-season record. The Cowboys won the NFC East and beat the Detroit Lions in the wild-card round before dropping a 26-21 decision to the Green Bay Packers in the divisional round Sunday.

Garrett took over as the Cowboys' interim coach in the middle of the 2010 season. He went 5-3 after a 1-7 start to the year brought an end to the Wade Phillips era.

The Cowboys finished 8-8 in each of Garrett's first three years as the full-time coach, losing Week 17 finales to NFC East foes the Giants, Redskins and Eagles to miss the playoffs each time.

Dallas was in a retooling -- if not rebuilding -- mode when Garrett took over, especially along the offensive line. In three of the past four years, the Cowboys drafted a lineman in the first round, selecting Tyron Smith, Travis Frederick and Zack Martin. Only nine players remain from when Garrett took over for Phillips: Jason Witten, Tony Romo, L.P. Ladouceur, Anthony Spencer, Doug Free, Orlando Scandrick, Barry Church, Dez Bryant and Sean Lee.

Garrett entered 2014 without a contract extension, knowing he had to win to secure a new deal. He had long been viewed as being on the hot seat in part because of the team he works for and the level of demands put on coaches by Cowboys owner and general manager Jerry Jones.

Despite Jones constantly saying he wanted Garrett to be his long-term coach, some wondered how serious Jones was because he let Garrett go into the season as a lame duck.

The Cowboys lost their season opener to the San Francisco 49ers 28-17 but then whipped off six straight wins, including a 30-23 victory at Seattle on Oct. 12. The Cowboys then lost two straight games, in part because of the two transverse process fractures Romo suffered against the Redskins on Oct. 27.

After a 33-10 loss to the Eagles on Thanksgiving, the Cowboys' playoff chances were in peril, but they responded with four straight wins, including a 38-27 victory in the rematch against Philadelphia in Week 15.

Garrett has a 41-31 regular-season record with the Cowboys. With four wins in 2015, he will surpass Jimmy Johnson for second place in team history for victories.

Garrett, Cowboys Close To Five-Year Deal
NFL insider Field Yates explains why it is critical for Dallas to get coach Jason Garrett under contract and the chances defensive coordinator Rod Marinelli returns.