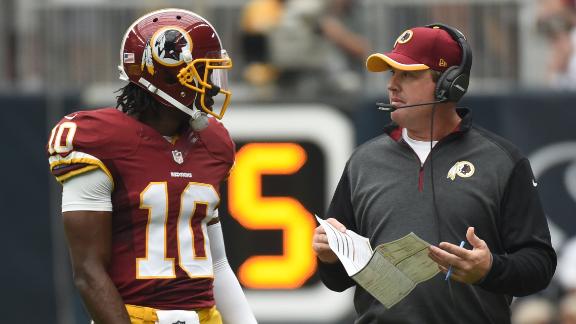 Washington Redskins coach Jay Gruden delivered some of his most pointed comments yet about Robert Griffin III, telling NFL.com earlier this week that it's time for the third-year quarterback to elevate his play.

"We'll see. ... We want Robert to excel, we really do. But the last two games, it hasn't been very good, anywhere. We gotta play better around him. And the biggest thing for us as playcallers, and for him, we just have to come together and jell with plays he's comfortable with. That takes time. But we don't have a lot of time."

Gruden suggested that Griffin's adversity is in part driven by negative publicity -- and a history of star treatment.

"His biggest thing, he's been coddled for so long," Gruden told the website. "It's not a negative; he's just been so good, he just hasn't had a lot of negative publicity. Everybody's loved him. Some adversity is striking hard at him now, and how he reacts to that off the field, his mental state of mind, how it affects his confidence, hopefully it's not in a negative way."

It's been a tumultuous week for the Redskins, who fell to 3-7 with a loss last Sunday to the Buccaneers.

Afterward, Griffin spoke about how poorly he played but also issued some comments that were interpreted by some as casting blame on his teammates. The next day, Gruden chastised the QB for worrying too much about others and not enough about his fundamentals.

The two downplayed the back-and-forth later in the week, but it's clear Griffin has struggled.

Through four games, he has thrown for 763 yards, with 2 total touchdowns, 3 interceptions and a QBR of 34.2. The Redskins are 0-2 since he returned from a dislocated left ankle.

Griffin starred as a rookie for Washington, dazzling with runs and passes before a season-ending injury to his knee. The Redskins have been reluctant to run with him since, but Gruden indicated that may change.

"It's a production-based business," he told NFL.com. "We haven't won many games lately with him. We gotta figure out a way to get in the end zone. We just have to score. I don't care how we do it. If it's running the zone-read, I don't care. Quarterback sneaks, I don't give a damn. We gotta find a way to utilize him where we can get productive drives and stay away from negative plays and have some consistency."

And if not? There's backup Colt McCoy, who won two games while Griffin was sidelined with the dislocated ankle, lurking.

"We have a guy behind [Robert] that played pretty well, and people are looking, 'OK, he's 2-0,'" Gruden told NFL.com. "There's always pressure on the quarterback to perform. And if you don't perform, like any other position, somebody's behind you pushing you."