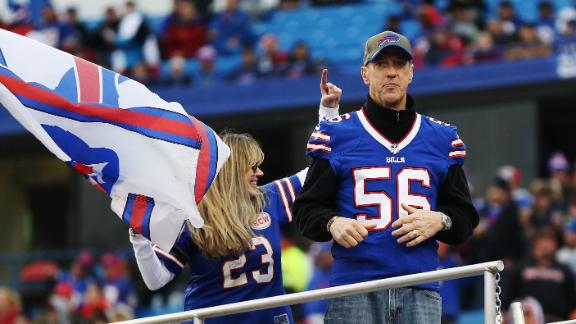 ORCHARD PARK, N.Y. -- Hall of Fame quarterback Jim Kelly honored his former Buffalo Bills teammate Darryl Talley by wearing his No. 56 jersey during the Bills' player introductions prior to Sunday's game against the Cleveland Browns.

Talley, 54, told the Buffalo News in a story published last week that he suffers from depression, lost his business and has thought about suicide. The former linebacker played for the Bills from 1982 through 1994.

Kelly was the latest Bills player to "lead the charge" during pregame introductions, standing above the tunnel while waving a Bills flag. He wore Talley's jersey number, but there was no name on the uniform.

"Darryl Talley has always been one of our favorites throughout our storied history, but we believe, respectfully, that some of the accounts for this story are factually incorrect," the Bills told the Buffalo News, in part, in a statement published with the story.

Fans have raised over $128,000 for Talley through the website GoFundMe.