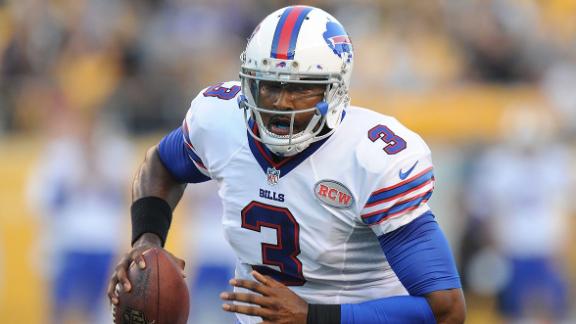 "But I have not yet seen what we all want to see. And I'm sure he feels the same way. It just hasn't happened, and hopefully that's just because of the preseason."

Kelly said the Bills' success this season will hinge on Manuel's performance.

"I'm pulling for him, and I'll continue to pull for him," Kelly said. "But that is a position without a doubt that is going to determine how the Buffalo Bills do this year. We have a good defense, great receivers, good running backs. It's up to EJ. He'll take us as far as he can, and I just hope he starts playing better."

Coach Doug Marrone said Monday that he will start Manuel and several other offensive players in Thursday's preseason finale against the Detroit Lions, although he did not say how much playing time they would receive.

Manuel and the Bills' first-team offense did not score a touchdown in their first 18 possessions this preseason, leading to the team being booed off the field by the home crowd at halftime of Saturday's 27-14 loss to the Tampa Bay Buccaneers.

Entering his second season, Manuel has completed 62.7 percent of his passes this preseason. He threw his first touchdown pass early in the third quarter Saturday, after the Buccaneers pulled their defensive starters.

"I think it's what you see. They either have to play better or we have to look to see if there's someone that can better that position, like we would any other position," Marrone said Monday. "If we feel at the end of the day that it's not good enough to win with -- which we haven't seen that yet -- there's only two ways to go.

"Either you put a lot of work into those guys and getting them better until you get to that position where you feel comfortable with it or you have to upgrade that position some other way."