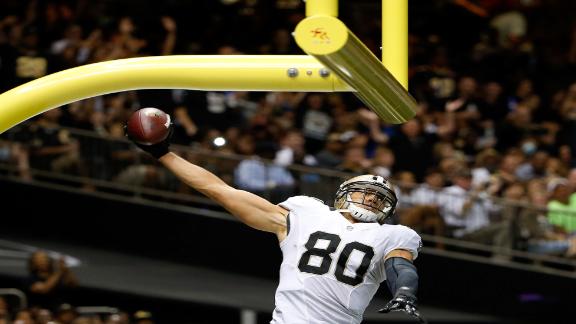 But a sideline scolding from New Orleans Saints coach Sean Payton might do the trick.

Graham scored his first two touchdowns of the preseason in Friday night's 31-24 victory over the Tennessee Titans at the Mercedes-Benz Superdome -- then promptly drew his first two unsportsmanlike conduct penalties for dunking over the goalposts.

After the second one, Payton chased Graham down on the sideline to chew him out -- which led to a brief but emotional exchange between the two.

Payton, who was furious about the Saints' overall tally of a stunning 22 penalties on Friday night, was asked after the game if he was "particularly upset" by Graham's.

"Well, would that make sense? Would you be upset?" Payton asked. "Yeah, I was. Particularly."

Payton declined comment when asked if he had previously talked to Graham about whether the dunks would be acceptable in the preseason. Graham declined to be interviewed, leaving the postgame locker room as reporters entered.

Graham's familiar touchdown celebration was outlawed by the NFL this offseason, lumped in with other taunting penalties in which the ball is used as a "prop." It has often been referred to as "The Jimmy Graham rule" since it was inspired in part by the star tight end knocking goalposts ajar on two different occasions in the past.

Offensive tackle and captain Zach Strief, who appeared to try and calm Graham down during the exchange with Payton, offered a candid take on what he considered an unfortunate episode, saying he could understand both sides.

"I understand Jimmy's frustration with that rule change. I understand what he's doing," Strief said. "And yet it's something, look, if this is a regular-season game, Jimmy's not dunking over the goalpost. Coach Payton was completely, I think, correct to jump on him. Any of us, I think would expect it. I think Jimmy probably expected it.

"Look, we don't like seeing stuff like that on the sideline. That's not how this team is. You know, Jimmy's an emotional player. He does emotional things all the time. Look, I'm not pointing fingers. I know it doesn't look good. I know Jimmy knows that it doesn't look good. And I think Jimmy will address it. But Coach Payton is gonna call you out when he sees things he doesn't like. And clearly two personal foul penalties he doesn't like."

Strief said he is confident Graham won't put the team in a bad position once the regular season begins.

"I know that Jimmy is not a selfish guy. He wouldn't do that in a situation that it would really hurt us. And yet, Jimmy knows that can't go on," Strief said. "I think that was his one opportunity to make his statement on it without making a statement, without saying words.

"People love Jimmy because he gets excited, and they love him because he celebrates. The fans love that stuff. And Jimmy is frustrated because they're taking something away that purely ... adds entertainment to the game. And the league doesn't like it, and that's fine. I think Jimmy knows in a real game, he wouldn't put the team in that situation."

Graham said the same thing earlier this offseason, insisting that he'll be smart and will find another way to celebrate. But the former college basketball player hasn't been ready to give up on his go-to celebration of choice just yet.

Graham did the same thing two weeks ago in a Saints scrimmage, which was being officiated by visiting NFL officials in town to explain this season's new rule changes. And afterward, he took to Twitter to have a little fun with his protest.

Last week, Payton voiced his displeasure after the Saints committed 10 penalties in their preseason opener, and the coach made it a point of emphasis all week in practice. Then the team went out and committed 22 more on Friday -- plus an estimated six more that were declined by the Titans. Eighteen of those penalties (14 accepted) were committed in the first half when the starters were in the lineup.

"Obviously that was painful to watch," Payton said to open his postgame news conference, beginning a tirade that channeled former Saints coach Jim Mora. "I don't recall, I can't recall ever a game with that many penalties. And here's the thing, most of the ones I saw were good calls. So this is obviously -- this isn't about a crew calling a lot of penalties. This is obviously something I've got do a better job with. Because, look, we'll find ourselves at the short end of a game and then wonder about our offseason goals and what happened. And we won't know exactly when it happened. ...

When asked if the defense's aggressive attempts to force more turnovers might have led to the penalties, Payton quickly shot down the excuse.

"We'll say, 'Hey, when we get to the regular season, it'll clean itself up.' That's silliness."

The Saints were without Drew Brees, who again sat out with an oblique strain he suffered in practice Aug. 1. Brees is expected to be healthy in plenty of time for the regular season, though. He threw passes with receiver Kenny Stills and ran sprints on the field before Friday's game, among other conditioning work.

Saints receiver Marques Colston was a surprise scratch. He watched from the sideline for an undisclosed reason. 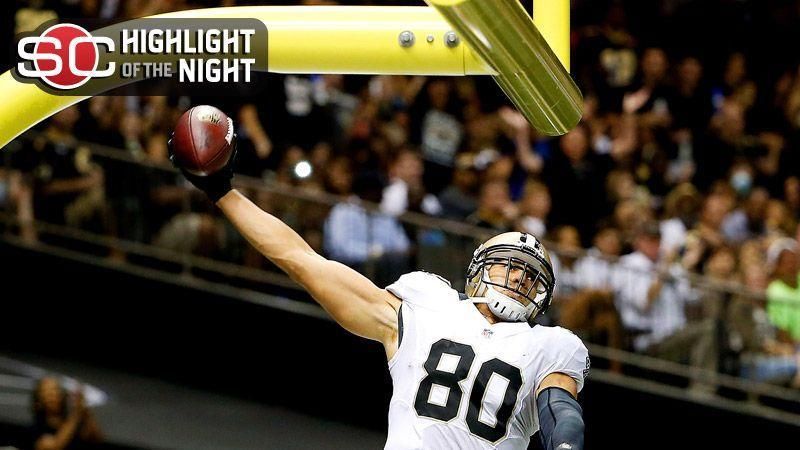 Graham Flagged For Dunks In Saints' Win
Jimmy Graham was penalized twice for dunking over the goal post in the Saints' 31-24 win over the Titans.