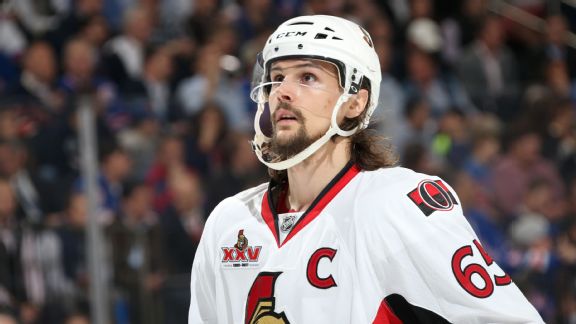 The NHL gets it right. While other professional sports give out MVP trophies for the World Series, NBA finals and Super Bowl, the NHL awards the Conn Smythe trophy to the player who is "judged most valuable to his team during the Stanley Cup playoffs." It rewards someone who achieves throughout the entire journey: the playoff MVP.

The Stanley Cup finals are certainly weighted in the voting, and a player can vault up the Conn Smythe leaderboard with a huge performance, but the award takes into consideration the entire, two-month-long sacrifice of mind and body. It's only fair.

The Stanley Cup playoffs have their own texture and feel and level of desperation and passion. It isn't just that the intensity increases from the regular season. That's too simplistic. No, the playoffs require an advanced level of focus, something akin to an Ironman competition. Players need to be impervious to pain and maintain a steady, consistent level of effort. Some simply can't summon those attributes or don't bother to test themselves.

Some players discover how to solve that emotional mystery early in their careers, while others always look at it like a Rubik's Cube. I think that's the issue with theWashington Capitals'core. It's not just about scoring goals, and it's never just about one guy, although the top guys have to be maniacal about winning, and having one guy playing with that state of mind is not enough.

There are four teams left and eight more games to be won before anyone lifts the Cup. But these four fellas have represented their teams well and are my Conn Smythe leaders -- so far.

As noted above, some players discover the level of play and mental fortitude it takes to live and thrive in the Stanley Cup playoffs. Karlsson has cracked the code -- while at the same time apparently playing with cracked bones in his feet. Some players think they are playing as hard as they can or doing as much as they can, but they really are not. They can go deeper.

Karlsson has figured it out this spring, and in doing so, he has gone from a Hall of Fame defenseman, which he certainly already was, to a playoff legend. Karlsson has been the star of the Stanley Cup playoffs. He always had style, but this season and this postseason, the Swede has shown a limitless amount of substance. His standing has been elevated to a whole new status, aNicklas Lidstrom, Ray Bourque, all-time-great status.

Karlsson probably won't win a Cup this year -- or maybe ever -- but titles are the result of teammates, not individuals. No one does it alone. However, this spring, no one has done more, and in an unexpected way, than Erik Karlsson. He's a sweet, sick, singular talent.

This is a complex one. The Penguins are nowhere -- no new arena, no new, young, energized fan base -- without Sidney Crosby and Evgeni Malkin. They are both all-time greats. (Not including Malkin on any Top 100 list is a black hole of thought.) You cannot overstate how much they make things easy and workable for their teammates. They make wingers rich. They will make their coach, Mike Sullivan, rich. They have made Mario Lemieux richer. They are the central nervous system of the entire Penguins operation.

The Penguins would not be in the conference finals this season, however, without Fleury. He has been the difference-maker this spring.

The 32-year-old veteran is still the freakish, fearless goalie he has always been, but Fleury has become much better technicallyand more aware inside his circle. (The circle's circumference is three feel from the net in all directions.)

Goalies have to be outstanding in that circle, especially during the playoffs. The game is faster in the postseason, and there are more pinball-like puck bounces because of the increased speed and bad-angle shot attempts. Fleury used to be brutal in the goalie's giant circle. He gave up laughable goals. But he has tightened that up. (Matt Murray is also excellent in this area. Either Fleury copied Murray by observing him over the past year, or they are both being coached well in this area.)

I've often said that the Penguins should erect a statue or create a giant mural commemorating the save Fleury made on Lidstrom to secure the 2009 Stanley Cup for the Penguins. It was like Bill Mazeroski's walk-off home run to win the 1960 World Series for the Pirates or Ben Roethlisberger's Super Bowl XLIII-winning pass to Antonio Holmes. Fleury's save won a championship. If Fleury wins a Cup this year, his Hall of Fame door will open. If he continues to play strong into his 30s, he'll be able to walk right on through to the HOF.

Rinne looked like a newborn elk playing goalie for Finland during last September's World Cup of Hockey. He was brutal at times. He has carried such a load during his nine seasons in Nashville that I wondered if he was starting to burn out after so many years of intense mental concentration and heroic, physical goaltending. That kind of play, which Rinne has consistently shown for the Predators, takes a toll. At any time, it can catch up with goalie and leave him a shell of what he once was. At the World Cup, Rinne was struggling to make the same kind of plays around the net that I mentioned above with Fleury.

But Rinne has shown no scar tissue in the playoffs so far. Nashville added the necessary skill around him, and the arrival of defensemanP.K. Subbanlast summer had to help. Not only is Subban a valuable player, but also, his big personality serves as a lightning rod. A weak, insecure organization might see that as a negative. A strong front office -- with the kind of understated confidence that Nashville GM Dave Poile and assistant GM Paul Fenton have -- saw it as a positive.

Subban draws attention and then disperses it back via his energy and charisma, as well as his play on the ice. Everyone around him is free to be who they are and go play. Nashville has a Stanley Cup formula right now. The Predators are built to win it all if Rinne continues to play as he has and a couple of the offensive leaders have a big month. But they are also about to face the best team they've played in this postseason.

A friend texted me recently and said, "A couple of us are having a newsroom debate: Is Ryan Getzlaf a Hall of Famer?" I responded, "100% yes, a no doubter. Pick another topic."

I've always had a crush on Getzlaf's game. Big body, long reach, amazing hands, he does everything well with the puck. And the 32-year-old has recently added five-star leadership to his résumé. He is reaching that Messier/Yzerman-level, the quintessential Canadian-born captain. Getzlaf, like Karlsson, has taken his leadership, commitment and performance to another level this spring. He has grown into his skin.

I once wrote that ifBuffalo SabrescenterJack Eichel has a career that mirrors Getzlaf's, he will have had a successful one. Now, Eichel skates much better and will be a more prolific goal scorer than Getzlaf, which will give Eichel a legitimate shot at trophies -- such as the Hart and Art Ross -- that Getzlaf won't win. But I still find the two to be comparable.

Eichel should study Getzlaf's on-ice and locker-room demeanor. He should call Getzlaf this summer and ask him what he can do to get where Getzlaf is now and how he can learn to be an undisputed, grownup leader like Getzlaf by showing he cares about his teammates -- and winning at all costs.