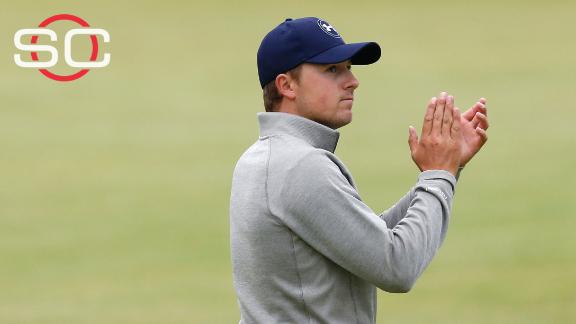 AKRON, Ohio -- Jordan Spieth drank from the Claret Jug on the way home from The Open with winner Zach Johnson, got back to practicing a few days later, visited Whistling Straits -- site of next week's PGA Championship -- over the weekend and is seemingly past any disappointment associated with not winning the third leg of the Grand Slam.

"I'm hoping to kind of prove, coming off of this last major, that I've kind of got a little bit of revenge that I need to get out from having control of the Open Championship with two holes to go and not closing it out,'' Spieth said Wednesday at Firestone Country Club. "That leaves kind of a bad taste in my mouth, not because of the third in a row, but strictly because you don't get many opportunities to contend in a major, in an Open at St. Andrews, in your life.

"So to have that chance and to feel like I was the one in control and to not finish it is a tough feeling, and it was a tough feeling on that flight home, especially with Zach and the Jug there. I wish that it was in my possession there and not his."

Spieth, 22, is playing his first event since The Open and will be alongside Johnson for the first two rounds of the WGC-Bridgestone Invitational, where 48 of the top 50 in the world are entered.

Missing is No. 1-ranked Rory McIlroy, still out with the ankle and ligament injuries he suffered on July 4. Spieth, ranked No. 2, could ascend to No. 1 with a victory this week. (No. 22 Chris Kirk is also out due to a hand injury.)

While that is a big goal, more so is the idea of getting right back to the work and pursuing more titles.

"I knew coming here, in order to be on top of my game, to get into contention, to feel the pressure and see the tendencies, good and bad, that I'm into it right before a major championship is important,'' said Spieth, who could still join Ben Hogan and Tiger Woods as the only players to win three majors in the same year. "So getting in contention this week is extremely important and how I'm going to finish out this tournament and be prepared for next week.

"I wanted to be on my best as early as I could, and that's why I changed to only taking a couple of days off and working a little bit harder leading up to this."

Part of that included a two-day trip to Whistling Straits, where the wind blew so hard on Sunday that players were ordered off the course due to an impending storm.

"I really enjoyed it,'' he said of the venue that hosted the 2004 and 2010 PGA Championships. "I think it's a ball-strikers golf course. It's one, tee to green, you have to be very special."

Although Spieth expressed frustration over not taking the Claret Jug home himself, he didn't let it stop him from drinking out of it and celebrating Johnson's victory.

"It just stings because the history element was there of winning an Open at St. Andrews, but also our team did everything to put ourselves in position in yet another major, and then it was just my execution that wasn't there,'' Spieth said. "We had all the tools, but you just can't close everything out. It's just a little chip on my shoulder that I'd like to get back, just not closing out a tournament."