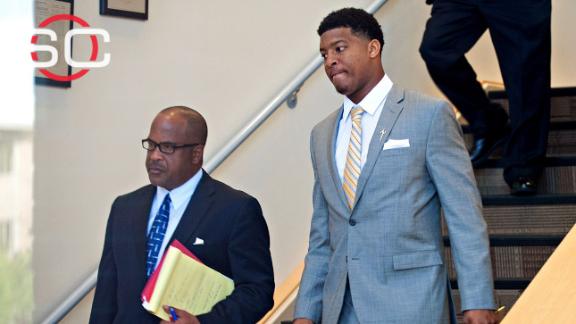 A federal judge on Wednesday denied Florida State University's motion to dismiss a Title IX lawsuit filed by a former student who accused ex-Seminoles star quarterback Jameis Winston of raping her in December 2012.

"We are very pleased with the ruling and are looking forward to the upcoming depositions," the woman's attorney, John Clune of Boulder, Colorado, told ESPN.com on Wednesday.

The woman, Erica Kinsman, also has filed a federal civil lawsuit against Winston, who was the No. 1 pick of the Tampa Bay Buccaneers in this past spring's NFL draft.

"In sum, FSU offers a different take on some of the facts in the complaint and additional facts that are not in the complaint in an attempt to show its efforts to respond were diligent and genuine, or at least not 'clearly unreasonable' under Title IX," Walker wrote in his motion. "This Court does not resolve such factual disputes on a motion to dismiss.

"Viewed in the light most favorable to Ms. Kinsman, the complaint plausibly alleges deliberate indifference during this period that effectively denied her the ability to attend FSU."

Kinsman's lawsuit alleges "deliberate indifference" by FSU officials in response to her alleged assault. Winston, who won the Heisman Trophy and led the Seminoles to a national championship in 2013, was never interviewed by Tallahassee police or the state's attorney's office. State attorney Willie Meggs decided not to pursue criminal charges against Winston after reviewing the case in December 2013, and he was later found not responsible for assaulting the woman following an FSU student conduct code hearing in December 2014.

Winston has filed a countersuit against Kinsman, in which he denied her allegations of rape, sexual battery, assault, false imprisonment and intentional infliction of emotional distress.