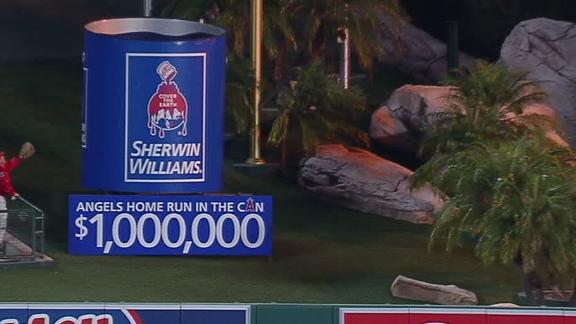 A ninth-inning home run by Los Angeles Angels slugger Justin Upton on Tuesday night appeared to be on the mark for a $1 million stadium promotion when it bounced inside the oversized paint can behind the left-center field fence at Angel Stadium, but the Angels said after the game that the homer would not count for the promotion because it did not land on the fly.

With Los Angeles trailing 6-2 in the ninth inning to the Cleveland Indians, Upton's 444-foot solo shot easily cleared the fence before it bounced on the grass, right in front of the "Angels Home Run In The Can" sign, before falling into the familiar 10-foot tall Sherwin-Williams paint can.

The homer drew a loud reaction, and not just because it was Upton's career-high 32nd of the season. The paint company has been running a promotion this season in which it will donate $1 million to the Angels Baseball Foundation if an Angels player hits a home run that lands in the can.

However, the Angels said Upton's homer would not count for the $1 million donation because it bounced before it went inside the paint can. To count, the homer would have had to land inside the can without bouncing, the team said.