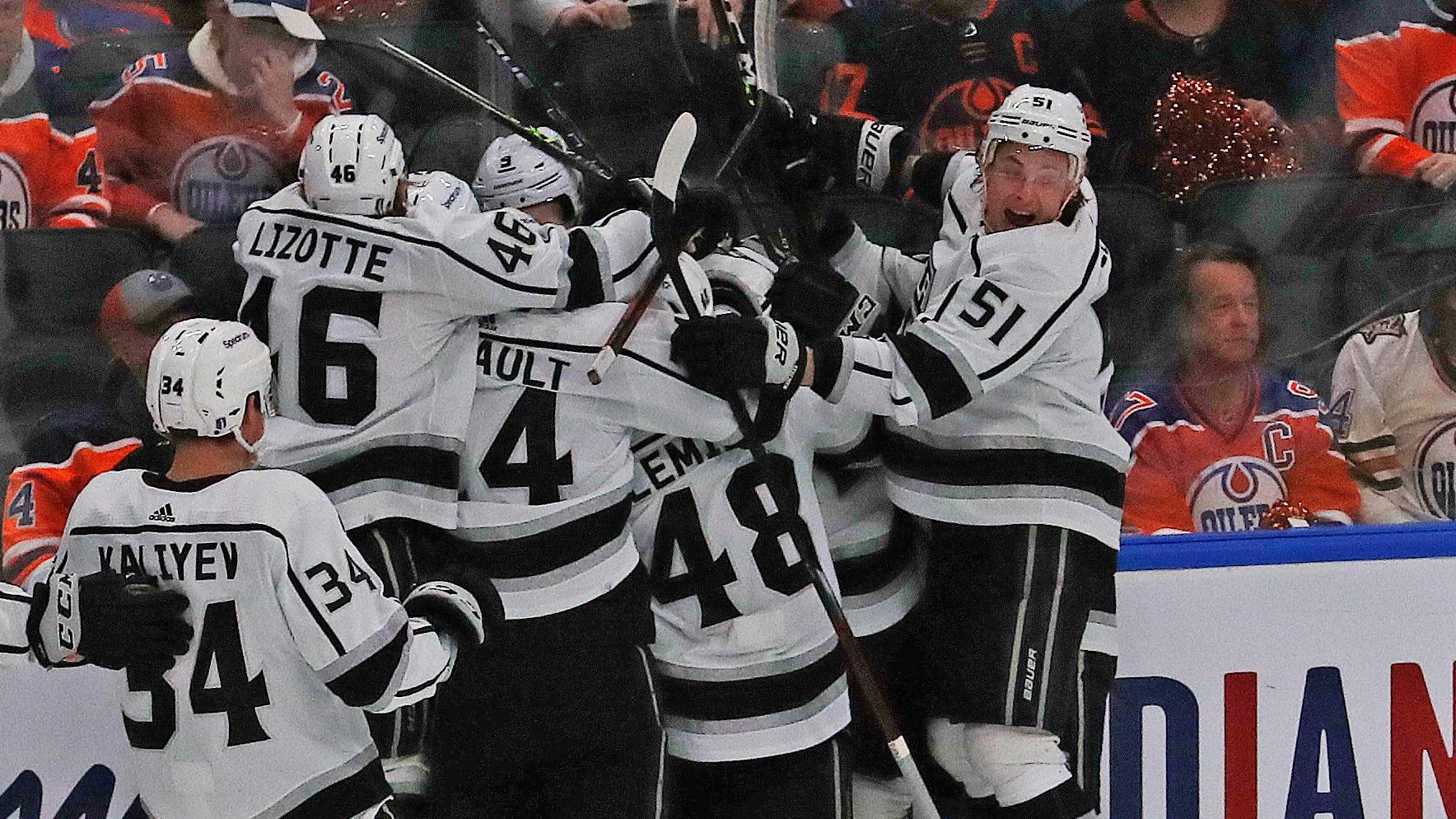 EDMONTON, Alberta -- - Three-point games from Edmonton's stars wasn't enough to save the Oilers. Adrian Kempe's overtime goal moved the Los Angeles Kings within a victory of advancing in the playoffs.

Kempe scored 1:12 into overtime to give the Kings a 5-4 win over the Oilers on Tuesday night for a 3-2 lead in the first-round playoff series.


Kempe muscled his way past his defender and wrapped a shot around Edmonton goalie Mike Smith to secure the victory.

"There is still a lot to play for," Kempe said. "We're obviously very excited where we're at right now, it was a great win for us and our confidence is good, but we have to rest our mindsets tomorrow. We can enjoy it tonight and play as good as we did tonight at home on Thursday."

The result means the Kings can advance with a victory in Game 6 in Los Angeles on Thursday night. It also means the Oilers need a win to stave off elimination.

"They showed their heart in fighting back but we didn't help ourselves by finding ourselves down early. We have to correct that," Oilers head coach Jay Woodcroft said.

"(We're) going to L.A. to win one game. Pressure's on them to close us out and for us, our job is to find a way to have a good start to first period."

Kempe also scored and had an assist for the Kings in regulation. Troy Stecher, Andreas Anthansiou and Phillip Danault also scored.

Leon Draisaitl scored twice and had an assist for Edmonton. Connor McDavid had a goal and two assists and Zack Kassian added a goal for the Oilers, who were coming off a 4-0 loss in Game 4 on Sunday.

"We found ways to produce offense. And we scored four tonight. That needs to be enough in a playoff game," McDavid said. "Obviously it's not. We've got to keep the puck out of our net."

Jonathan Quick made 24 saves for the Kings. Smith stopped 38 of 43 shots.

"I think at the beginning of the series if someone would have said would you take 2-2 and go into overtime for Game 5, we would have taken it for sure," Danault said.

"That's what we said when we came (into overtime) and we had a big first shift and then right away in the second shift (Kempe) capitalized. It's just a great mentality that we have and we wanted to win another game here."


The Oilers entered the third period down 3-1 and used their special teams to claw their way back into the game with two power-play goals and a short-handed score.

Edmonton scored the tying goal on another man advantage with 4:52 left in regulation after Danault was called for interference.

Collecting a slick pass across the slot from McDavid, Draisaitl hammered a one-timer from the bottom of the faceoff circle for his fifth goal of the playoffs and his second of the game.

A four-minute minor set up much of the action in the third after Ryan McLeod was called for a high stick on Matt Roy 9:13 in.

The Kings took a 4-2 lead at the 11:06 mark when a backdoor shot from Danault trickled over the goal line.

The Kings stayed on the power play, but it was Edmonton who scored next.

McDavid drove the net, then sliced a puck into the slot where Alex Iafallo tried to sweep it away, but put it instead on Draisaitl's tape. He scored to make it 4-3 at the 12:33 mark.

A power-play goal from McDavid 2:50 into the third cut the Oilers' deficit to 3-2.

Just three seconds after Blake Lizotte was called for high-sticking, McDavid sent a backhanded shot off the crossbar and over Quick, sprawled in the crease. The goal was the second of the playoffs for the Oilers' captain.

"We do have to watch our sticks and be a little more disciplined going forward here," Draisaitl said. "We can't play half the game or quarter of the game short-handed. So it takes a lot of guys out of the game. So we'll fix it."


A patient play by Athanasiou boosted the Kings' lead to 3-1 in the middle period.

Dustin Brown collided with Zach Hyman in the Oilers' zone and took off with the puck, slipping a pass to Athanasiou stationed at the side of the net. Athanasiou waited for Smith to dive, then sent a shot into the far corner of the net 13:34 into the second.

The Kings regained the lead midway through the second after Kopitar picked off a pass at the Oilers' blue line. He took a few strides into the Edmonton zone before slicing a pass to Kempe, who nearly lost the puck but reached behind to retrieve it before firing a wrist shot past Smith to make it 2-1 at the 9:29 mark.

Kassian temporarily injected some life into the listless Oilers with a goal 2:32 into the second.

McDavid picked up a rebound and instead of trying to force it in past Quick, the captain took it around the back of the net and found Kassian, who popped a shot in over defenseman Mikey Anderson lying in the crease for the equalizer.

It was the first goal Edmonton scored in four periods.

The Kings controlled the shot clock across the first, outshooting the Oilers 16-5, despite Edmonton having the lone power play of the period.

Stecher opened the scoring 3:43 into the game with a slap shot from about the faceoff circle for his second goal of the playoffs.

Game notes
Game 5 marked the first in the series to go to overtime. ... Athanasiou slotted back into the Kings' fourth line in place of Gabe Vilardi. ... Derek Ryan returned to the Oilers' lineup after missing Game 4 with an undisclosed injury.