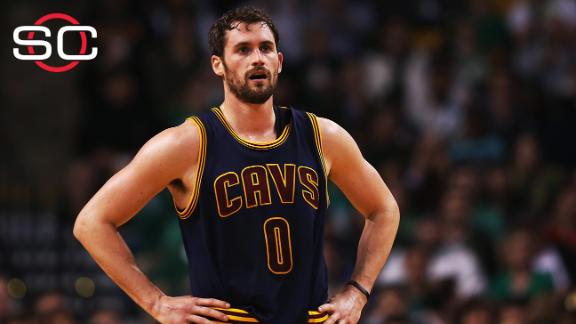 Kevin Love is re-signing with the Cleveland Cavaliers, he announced Wednesday.

Love has agreed to a five-year, $110 million contract with the team, sources said.

"I'm going back to Cleveland," Love said in a first-person essay on The Players' Tribune website. "After Game 1 of the NBA Finals, that's when it really struck me. Sitting on the sidelines, I never wanted to play in a game more than that one. I had dreamed of playing in the NBA Finals, and I just wanted to help my guys win. I couldn't have been prouder of them as they poured their blood, sweat and tears onto the court.

"Yeah, of course I've heard the free-agency rumors. But at the end of the day, and after meeting with my teammates [it turns out pools are great meeting places] and with the front office, it was clear Cleveland was the place for me. We're all on the same page and we're all in. We have unfinished business, and now it's time to get back to work."

The Cavs made Love a priority on the first day of free agency. Love had maintained throughout the season that it was his intention to stay with the Cavs, and he backed it up by committing to a long-term contract, which could end up being the largest contract given out in the history of the Cavs franchise.

"I did want to sit down with LeBron and just lay everything out there on the table," Love said in a Sirius XM Mad Dog Radio interview with The Players' Tribune.

"We definitely laid it all out there, hung out, just had a leisurely conversation, and it was one of those moments where I thought we made a lot of good decisions and ended up at the same place. It really played a big part."

He also explained why he decided not to do a free-agency tour or meet with other teams during the process.

"I had already gone through the process in my head," he said in the radio interview. "I mean, I could have taken my time and potentially complicated things.

"I kind of wanted to push everything aside, hash everything out on my own. I have a couple, really select few people I have in my life that have my ear, and just wanted to follow my heart and do what I thought was best. And as I ran through that, I always felt Cleveland came out on top in every different scenario."

Love said his three priorities were happiness, winning and money, and Cleveland was where "I can really take a run at all three of those."

The Cavaliers are ready to go when it comes to winning next season, he said.

"I think naturally it's going to take a lot of work, and especially after seeing this season and for a lot of teams you have to have luck and not be bitten by the injury bug and fight the battle of attrition, but it's also the hardest thing in the world to get to the mountaintop," he said. "I think it's going to take a lot of big efforts in re-signing some guys and also getting on the same page, but I think always Year 1 is the toughest and we'll be able to continue to work for something special in Cleveland."