KG on bite: 'Shout out to Mike Tyson' 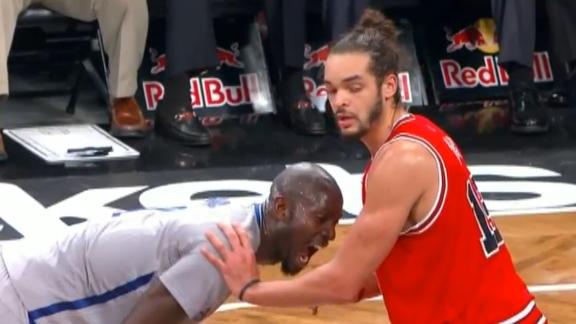 NEW YORK -- Kevin Garnett tried to bite Joakim Noah during the Chicago Bulls' 102-84 win over the Brooklyn Nets on Sunday. Noah couldn't believe it either. The Bulls' All-Star center has a long history with Garnett and admitted in the past that the future Hall of Famer is one of the players he looked up to most growing up. But even he couldn't believe Garnett tried to gnaw at his fingers, even if it was in jest.

Garnett had to laugh about it as well.

"I know how to bite somebody," Garnett told reporters in the Nets' locker room. "Obviously I was messing around in that moment. If I wanted to bite him, I'd have just ... shout out to Mike Tyson."

Was it the craziest thing anyone has ever tried to do to Noah on the floor?

Noah brushed off the suggestion that Garnett may have been trying to send a message. The pair have engaged in trash talking for years dating back to Garnett's days with the Boston Celtics. Garnett earned a technical foul in the first half of the game for throwing an elbow at Noah.

"If somebody tries to bite you I think it's a little bit more than trying to get in your head," Noah said. "I don't know, but it's pretty amazing."

What's evident is that both players have a large amount of respect for one another.

"He's a competitor, I'm a competitor," Garnett said. "We're banging ... it is what it is. Every time we've played, there's always something. But I respect the guy, respect the Bulls ... everybody over there. I respect everyone in this league."

Noah is clearly enjoying having the upper hand on Garnett at this stage in his career.

"I have fun playing against him when we win," Noah said. "We've been doing some winning against him lately so I know how competitive he is and I know it drives him crazy to lose like that so we just got to keep doing what we're doing. I'm not worried about Kevin Garnett, I'm just worried about us. Just staying healthy and getting better, that's really all I care about."