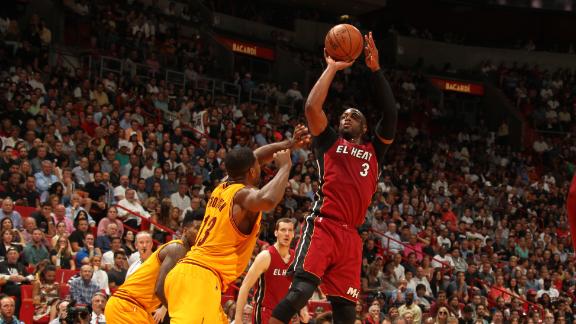 MIAMI -- The Heat have owned the Cavaliers in South Florida, and it has started to worry LeBron James.

Miami beat Cleveland122-101on Saturday to make it 11 consecutive home victories against the Cavs, dating to 2010. More importantly, since James returned to Cleveland last season, the Heat are 4-0 in the series, with the wins coming by a combined 60 points.

Currently, the two teams are positioned on the same side of the playoff bracket and are a potential second-round matchup.

"The way they've beat us here is a little concerning if we face them [in the playoffs]," James said after Saturday's loss. "I think we'll be ready for it more. We didn't play [up to our] potential. We didn't play our game. We let them play their game, and they took it to us."

James scored 26 points for the Cavs, who were a step slow in their fifth game in seven nights. James didn't play in the Cavs' previous game in Miami, a contest the Heat won by 15 points in December. The Cavs beat the Heat by 10 points in October in their only trip to Cleveland this season.

"With LeBron James coming back here, they get up for the game," Cavs coach Tyronn Lue said. "We need to start getting up for these games."

Dwyane Wade scored 24 points for the Heat and reached the 20,000-point mark in the third quarter. He was one of five Heat players to score in double figures Saturday.

James has played relatively well in Miami, despite some occasionally hostile treatment by his former fans. He has averaged 27.3 points on 55 percent shooting in three games at AmericanAirlines Arena the past two seasons. His teammates, however, have not followed suit.

Overall, the Cavaliers are 9-6 in their past 15 games, and their lead over the Toronto Raptors for the No. 1 seed in the Eastern Conference is down to 1.5 games.

"You would like to play well from February into March," James said. "Consistency is a part of life."