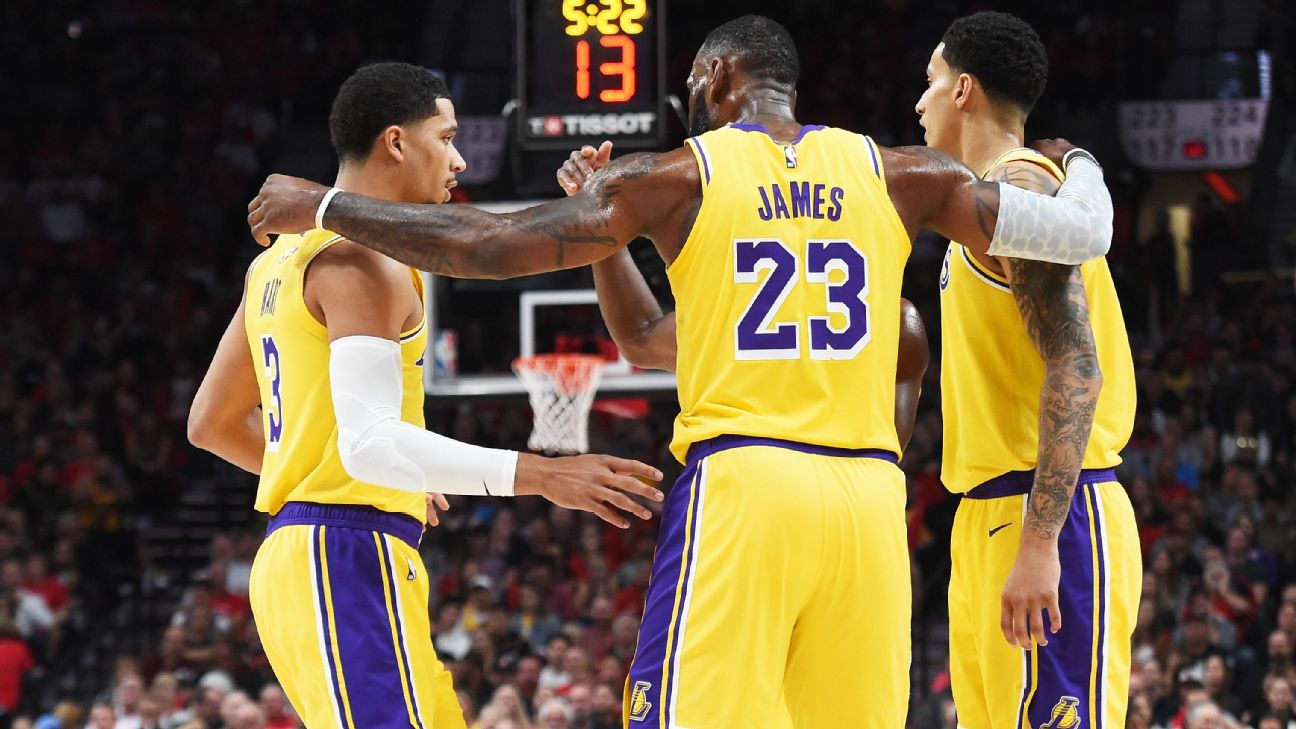 PORTLAND, Ore. -- LeBron James' debut with his new club began with two monstrous tomahawk dunks in the span of 19 seconds. But James knows he and the Los Angeles Lakers are far from a slam dunk right now and that their chemistry won't come nearly as fast.

After the LeBron Lakers era got off to an emphatic start Thursday night, L.A.'s defense couldn't contain theTrail Blazers' dynamic backcourt duo, as Damian Lillard andCJ McCollumspoiled James' purple-and-gold premiere to lead Portland to a 128-119 victory at the Moda Center.

"Um, not as fast as you guys think it's going to happen," James said when asked how long it will take for the Lakers' chemistry to develop. "I always kind of compare it to like instant oatmeal. It is not that fast. It takes a while to get to where you can close your eyes and know exactly where your guys are."

James poured in 26 points, 12 rebounds and 6 assists, but he watched the Lakers miss their first 15 3-point attempts, surrender 14 offensive rebounds and 21 second-chance points and lack cohesion on both ends of the floor at various moments. The Lakers also showed flashes of promise, especially with their pace, as they outscored the Trail Blazers 34-12 in fast-break points. Six Lakers also scored in double figures.

With NBA commissioner Adam Silver and Nike co-founder Phil Knight on hand to watch, this game felt like a major event, one that came with more hype than a typical season opener. Before the game, a horde of camera operators and reporters recorded James' every step off the team bus, all the way to his locker stall.

James was a picture of tranquility before the game, setting the mood for his Lakers debut with a mahogany teakwood-scented candle burning in the empty locker stall next to him.

His Lakers debut got off to a scorching start. The Lakers led by 10 early, and James' first basket in purple and gold came after he stole a pass from Jake Layman and then soared in for an uncontested breakaway power jam with 9:21 left in the first quarter. Less than 20 seconds later, James came through the lane to throw down another rim-rattling dunk. After both slams, James looked at Knight and Nike executive Lynn Merritt, who were seated courtside near the basket where James had scored.

"I was right there, first row," said Lonzo Ball, who came off the bench behind starter Rajon Rondo. "[Two] of the best two plays I've ever seen."

But some of the issues many thought could plague the Lakers this season -- especially early -- came to light in the opener. In free agency, the Lakers purposely surrounded James with multiple ball handlers and did not sign shooting specialists like the Cleveland Cavaliers had done with James in the past.

The Lakers opened the game by missing their first 15 3-point shots before Josh Hart (20 points) made the team's first trey with 2:22 left in the third quarter. Hart, who also hit a 3-pointer at the third-quarter buzzer, helped the Lakers finish 7-for-30 from behind the arc.

The Lakers management feels that the team has enough shooters, with the likes of Hart, Kentavious Caldwell-Pope, Brandon Ingram and Kyle Kuzma all expected to improve their shooting this season.

"Hopefully, it's a fluke," Ball said. "Hopefully, it doesn't happen again. I don't think we are going to shoot 0-for-15 again."

Ball (7 points) hit a 3-pointer with 8:07 remaining in the game to pull the Lakers within 101-100. But Lillard answered with a 3-pointer to spark an 18-6 run. Lillard (28 points) and McCollum (21 points) combined to score 20 points in the final eight minutes to lead Portland to its 16th consecutive victory over the Lakers. Nik Stauskas added 24 points for Portland, which has won its home opener in 18 consecutive seasons now.

Lakers coach Luke Walton tried a variety of lineups in the season opener, using James at one point with the four one-year Lakers signings of Rondo, Caldwell-Pope, Lance Stephenson and JaVale McGee. Walton also had James play alongside the four Lakers prospects of Ingram, Kuzma, Ball and Hart.

The Lakers are hoping their up-and-coming core adjusts to playing alongside James quicker than expected. In the two other times James has debuted with a new team, it took a while for him and his new teammates to jell.

TheHeatstumbled to a 9-8 start in James' first season in Miami before winning 12 consecutive games, finishing 58-24 and reaching the first of four straight NBA Finals appearances.

When James returned to Cleveland after his first stint there, the Cavaliers opened 19-20 under David Blatt before winning 12 straight, finishing 53-29 and making the first of four straight NBA Finals.

"We're literally less than a month in," James said of the team since training camp started at the end of September. "So, it's still early. You still got to go through some things. You're going to go through some adversity. See how guys react to it. See what guys get going."

It doesn't get any easier for the Lakers, as James will make his Staples Center regular-season debut on Saturday against James Harden, Chris Paul and the Houston Rockets.

"Reasonably, it is going to take time," Ball said of when the Lakers will hit their stride. "We want to get there. We want to bring L.A. back. It's just the first game. It is not a big deal right now."

'Baby Lakers' still learning how to play with LeBron
Mark Schwarz details how the young Lakers are still developing chemistry with LeBron James and how patience will be needed early on. 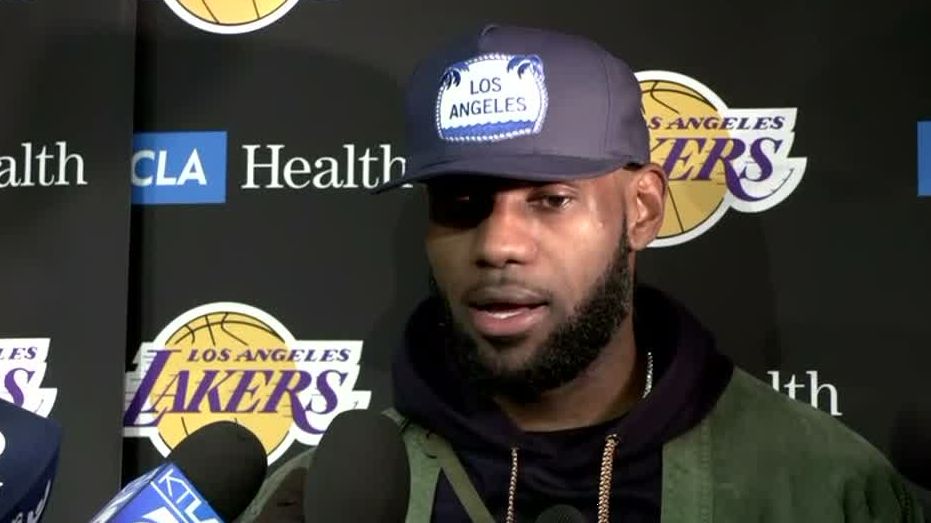 LeBron: 'It's gonna take patience'
LeBron James harps on patience and development after the Lakers' 128-119 opening-night loss to the Blazers. 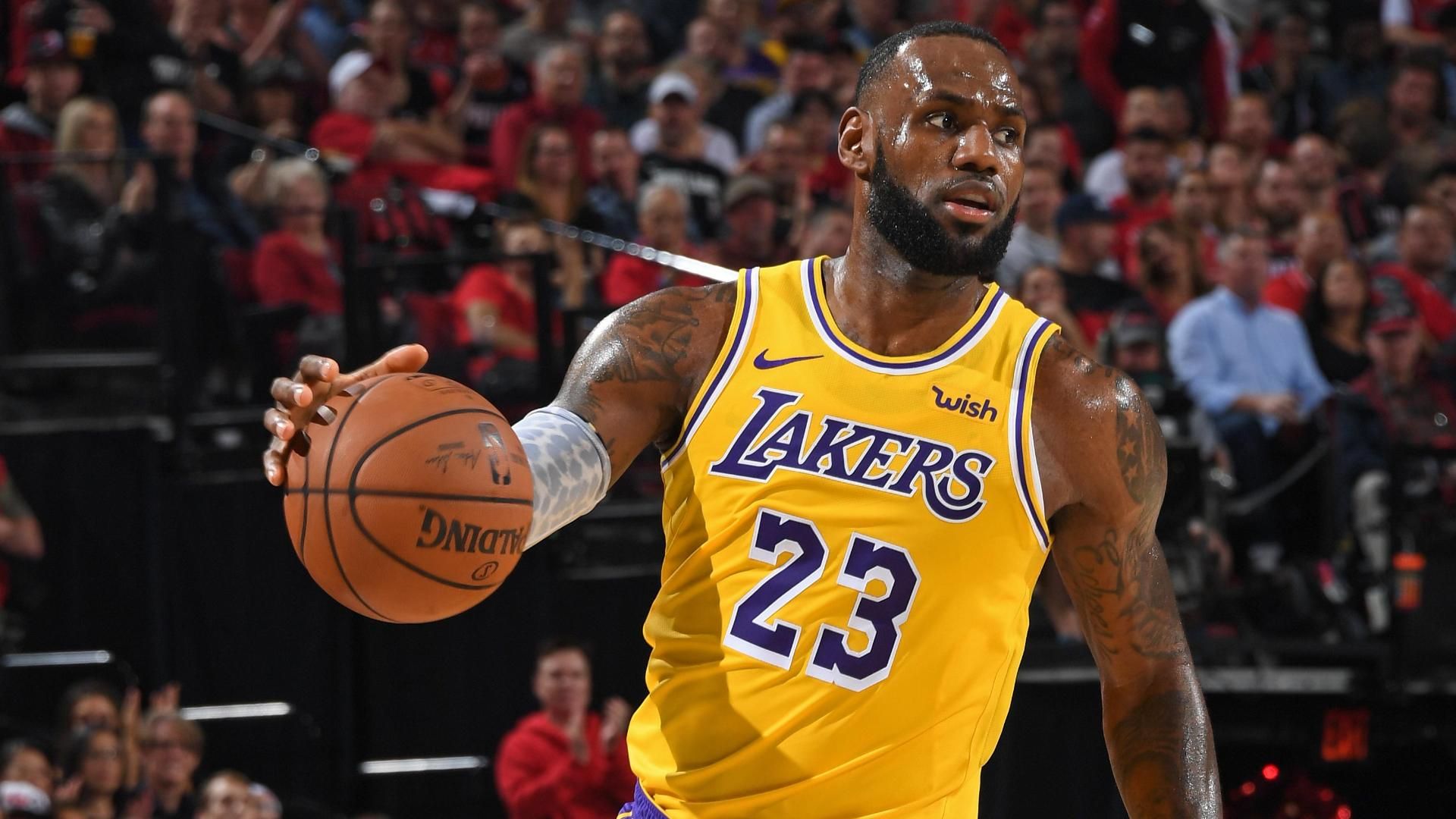