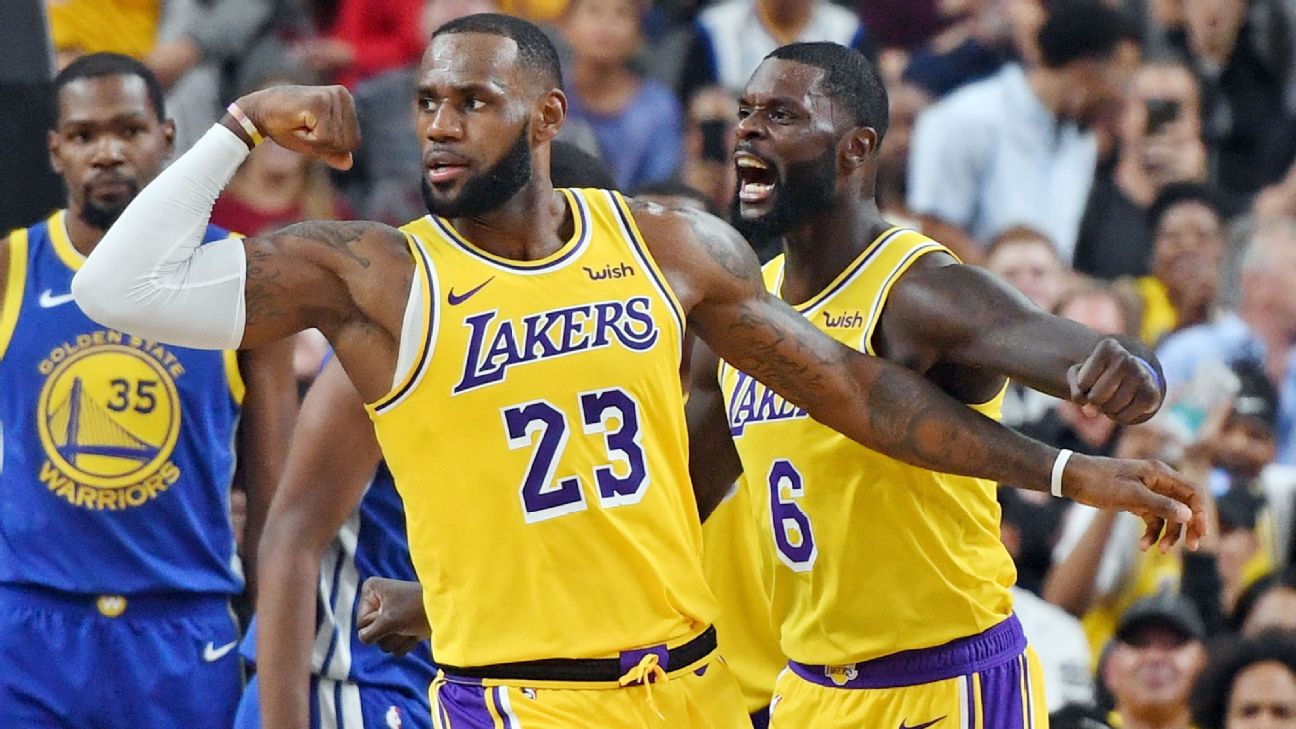 LAS VEGAS -- LeBron James welcomed Lonzo Ball back to action Wednesday with a perfect alley-oop lob that Ball flushed with two hands on a well-executed give-and-go.

The Los Angeles Lakers got their first glimpse of James and Ball, last year's No. 2 overall pick, on the floor together and liked what they saw in the limited minutes the Lakers played their core rotation players.

In what likely could have been James' final dress rehearsal for the regular season, he put on a show in Las Vegas with 15 points, 10 rebounds and five assists and delivered his first buzzer-beater as a Laker -- a 35-footer from the left corner near midcourt at the end of the first half. Despite James playing just 17 minutes, all in the first half, the Lakers held off the defending champion Golden State Warriors123-113.

Stephen Curry scored 23 points, and Klay Thompson added 20 points. Kevin Durant had 18 points and 12 rebounds before fouling out with 5 minutes, 7 seconds left in the third quarter.

While James looks to be in midseason form already, the Lakers wanted to take a close look at Ball, who had not played since his last game of his rookie season back on March 28. After undergoing surgery on a torn left meniscus in mid-July, Ball has been eased back into action by the Lakers.

Coming off the bench with Rajon Rondo starting, Ball played 23 minutes and came away feeling good afterward. Ball, who looked noticeably stronger after spending much of the offseason in the weight room and gaining 15 pounds, hit 3-of-5 shots and had seven points, four rebounds, four steals, two assists and three turnovers.

With former Lakers legends Magic Johnson and Shaquille O'Neal watching from courtside, Ball got off to a rusty start, turning the ball over twice and firing an airball on his first shot attempt from behind the 3-point arc. But he settled down, got his wind and opened the second quarter with the alley-oop that James perfectly timed as if the pair had been playing together for a long time.

The play, which involves a back screen on Ball's man, is something the Lakers have often called for Ball, though this was the first time it was executed with James throwing the lob.

"Doesn't take much," James said when asked about the play. "It takes execution, it took a great back screen by [Kyle Kuzma on Quinn Cook]. It took Lance [Stephenson] doing what he needed to do on the slide going to the strong corner. When you got an athletic point guard like that, it's my job to put it up there for him to go get it."

James added, "I think we've all seen [Ball's athleticism] since he was in high school, I believe."

With one preseason game left against Golden State in San Jose, California, on Friday, Lakers coach Luke Walton tried to get a look at as many different lineups as he could. Ball got to play a few minutes with Rondo in the backcourt alongside Brandon Ingram, Kuzma and JaVale McGee. The Lakers could use both point guards on the floor together at times this season.

With Ingram scoring 26 points and making 15-of-17 free throws, Kentavious Caldwell-Pope scoring 20 points and Kuzma adding 22 points off the bench, the Lakers saw glimpses of what they could look like when they mesh together.

The Lakers took a step forward in that process by finally getting Ball and James on the court together in a game.

"When you play with LeBron, you got to keep playing, because he's easy to watch, as much stuff as he does," Ball said. "He had a monster first half. Best player in the world, that is what he does."

Ball, though, could only watch and admire James' buzzer-beating shot, which James caught past midcourt and shot effortlessly.

"I thought it was going in," Ball said. "He set his feet. Obviously that is his range. He shot it like it was a free throw. LeBron James."

Lonzo's first bucket in return is lob from LeBron
LeBron James lobs an alley-oop pass to Lonzo Ball, who finishes with a two-handed dunk which is his first bucket since returning from injury. 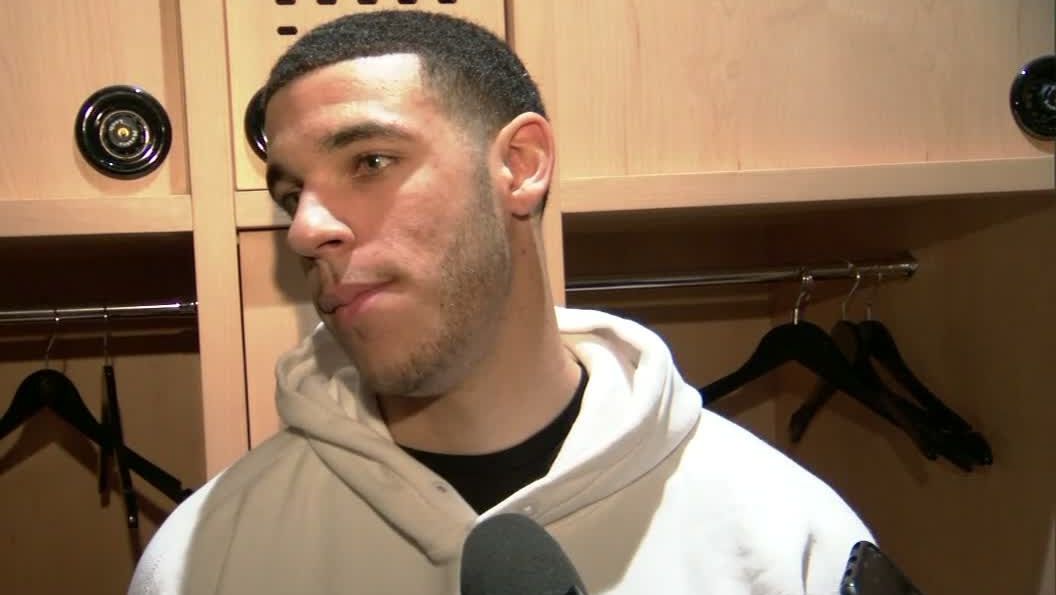