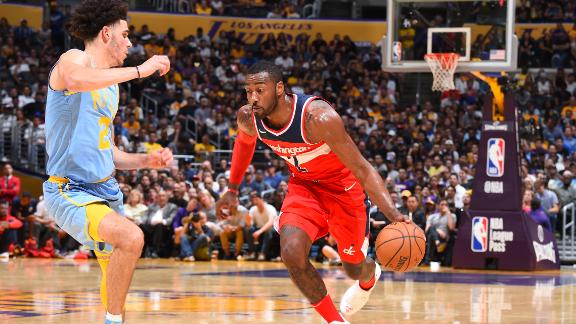 LOS ANGELES -- After a contentious buildup between the Washington Wizards and Los Angeles Lakers centered around a LaVar Ball guarantee and a prediction that John Wall would "torture" Lonzo Ball, Luke Walton told his players at shootaround that the team "should be offended" and "not stand for" someone saying something about one of their teammates.

A "more locked-in" Lakers rallied around Ball and handed the Wizards their first loss of the season with an inspired 102-99 overtime victory at Staples Center.

"Our guys were more locked-in tonight," Walton said after the Lakers (2-2) earned their biggest win of the young season. "It shouldn't be anything to do with [what Marcin Gortat and Wall said about Ball]. [But] I did [tell them] it is nothing personal but we defend each other. If people want to talk about our players, we should be offended and we should go into that game and telling ourselves that is not all right, and we are not going to stand for that, and we are not just going to [lay down] and let that happen."

Wall admitted that he was motivated by LaVar Ball's guarantee after the Lakers' loss to New Orleans on Sunday that his son was not going to lose again this week and by Gortat responding to that by saying that Wall would "torture" the rookie. He finished with 18 points, nine assists and one steal in the loss.

"I told you so," LaVar Ball told ESPN's Jeff Goodman after the Lakers' win. "I've seen this story before."

For the third time in four games this season, Ball struggled with his shot and went 2-for-11, missing all five of his 3-point attempts. But Ball got what he wanted most -- a win -- and he helped the cause by impacting the game with 10 assists, eight rebounds, one block and one steal to go with his six points and just one turnover. In overtime, Ball scored two points and had two assists, while Wall was 1-for-5 with two points.

Walton said he drew up the first play of overtime for Ball to shoot a 3-pointer despite the fact that he wanted his team to attack the paint.

"Lonzo, you are going to take this 3 and knock it down," Walton said he told the rookie. "And he liked it. He didn't make it, but he walked back to me and said, 'Coach, I am going to hit the next one.' And he missed the next one too. But his confidence was there. For a rookie, you love to see that, and down the stretch he made some really nice plays.

"Even when he is missing his shot, he is still impacting the game in such a positive way. We are really happy that we have him on our team."

During some of the times when Ball was on Wall, the No. 2 overall pick held his own most of the time by staying in front of Wall and harassing him into 2-for-7 shooting when he was on the Wizards' star.

In the fourth quarter and overtime, Wall missed 9 of his final 10 shots, including misfiring a potential game-tying, double-clutch 3-pointer at the overtime buzzer with Ball hanging on his hip. Wall was held to two points after the third quarter with Kentavious Caldwell-Pope drawing the responsibility of guarding Wall most of the time.

"I thought tonight was our best defensive night all year," Ball said. "... It started at practice, everyone bought into it, we were ready for this game. You could see it on the court, the way we were guarding tonight, we were all playing for one another."

Before the game, Wall praised Ball for being mature but also said his father could be "a gift and a curse because he's putting the pressure on him, but he don't have to guard them and play against him."

After the game, a diplomatic Wall praised the rookie for handling all the attention and admitted that LaVar Ball's outspoken act is something new for opposing players to deal with.

"He's a quiet kid who doesn't say too much," Wall told ESPN's Jeff Goodman. "He's been dealing with it [his father's outspoken comments] his whole life. It doesn't bother him. It's just new to everybody else. He's very mature for his age.

"He can pass, can score the ball -- he just wasn't making shots tonight. We both wanted to play better."

While LaVar's comments have made Lonzo a target in his first four games as the Clippers' Patrick Beverley and Wall have attested to, Wizards head coach Scott Brooks said people are missing the real point with LaVar and his son.

"I don't have no problem with it," Brooks said before the game. "I was the youngest of seven, my dad left when I was 2. My mom raised all of us on her own and as you are growing up in that situation, you have some anger and some pissed-off moments and some sadness, but you have to figure out ways to be happy and proud and continue to fight, and he has a father and mother that supports him.

"To me, I think everybody is missing the boat," Brooks continued. "Does he say some crazy things? Does he really believe he can beat Michael Jordan in a one-on-one? No. But I guarantee over dinner, his sons are killing him for saying things like that and are having fun. To me, laughter is an important part of life. They get it. They probably laugh a lot at the dinner table and probably a lot of them are laughing at all of us."

Gortat thought the Wizards and Wall would have the last laugh when he tweeted in response to LaVar's guarantee, "man.....pleaseeeeee!!! @JohnWall will torture him for 48min" followed by four crying/laughing emojis.

Washington (3-1) led by 10 with 7:08 remaining in regulation, but the Wizards center missed a driving dunk with Ball contesting that helped turn the momentum. Bradley Beal (28 points) later missed a free throw with 12.1 seconds left, which allowed Brandon Ingram (19 points and 10 rebounds) to send the game to overtime with a tip-in off his own miss.

While Ball said he will start making the wide-open perimeter shots he's missing -- he's shooting 5-for-24 overall and 0-for-10 from 3 in the past two games -- the rookie won't get into any war of words with other opposing players who decide to take shots at him.

The rookie knows he has a target on his back, mostly from his father's comments, but he's used to dealing with what comes with it.

"Coming in, I already knew everybody was going to come at me like that," Ball told ESPN's Ryan Ruocco in a pregame interview. "So I don't really pay it any mind. I'm not going to get into any Twitter war. I'm going to go out there and help my team.

"I'm not saying anything, and I'm not retaliating," added Ball, who has 32 assists in his past three games. "It doesn't affect me in any type of way, I don't think. I just go out there and play. It's the NBA, so guys should want to come at me every night. I have no problem with it. So I just go out there, like I said, and play."

Lakers need OT to top Wizards
In a battle of John Wall versus Lonzo Ball, the Wizards hold Ball to just six points but his eight rebounds and 10 assists, including the go-ahead dish to Caldwell-Pope, lifts the Lakers to a 102-99 victory. 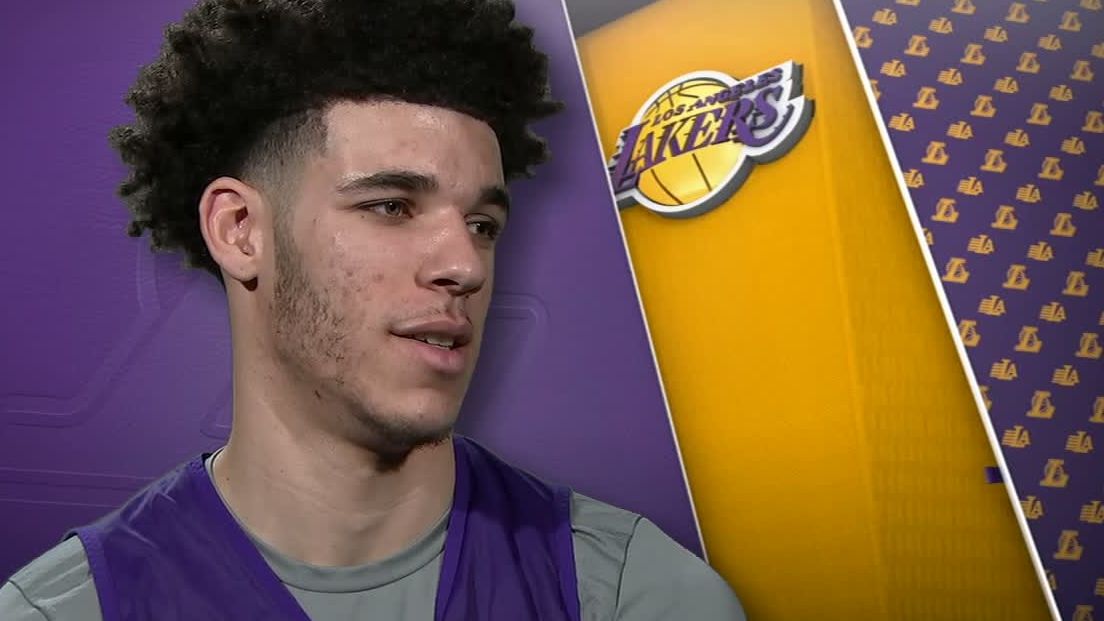