Lonzo Ball: Magic Johnson said this will be 'biggest summer' of my life 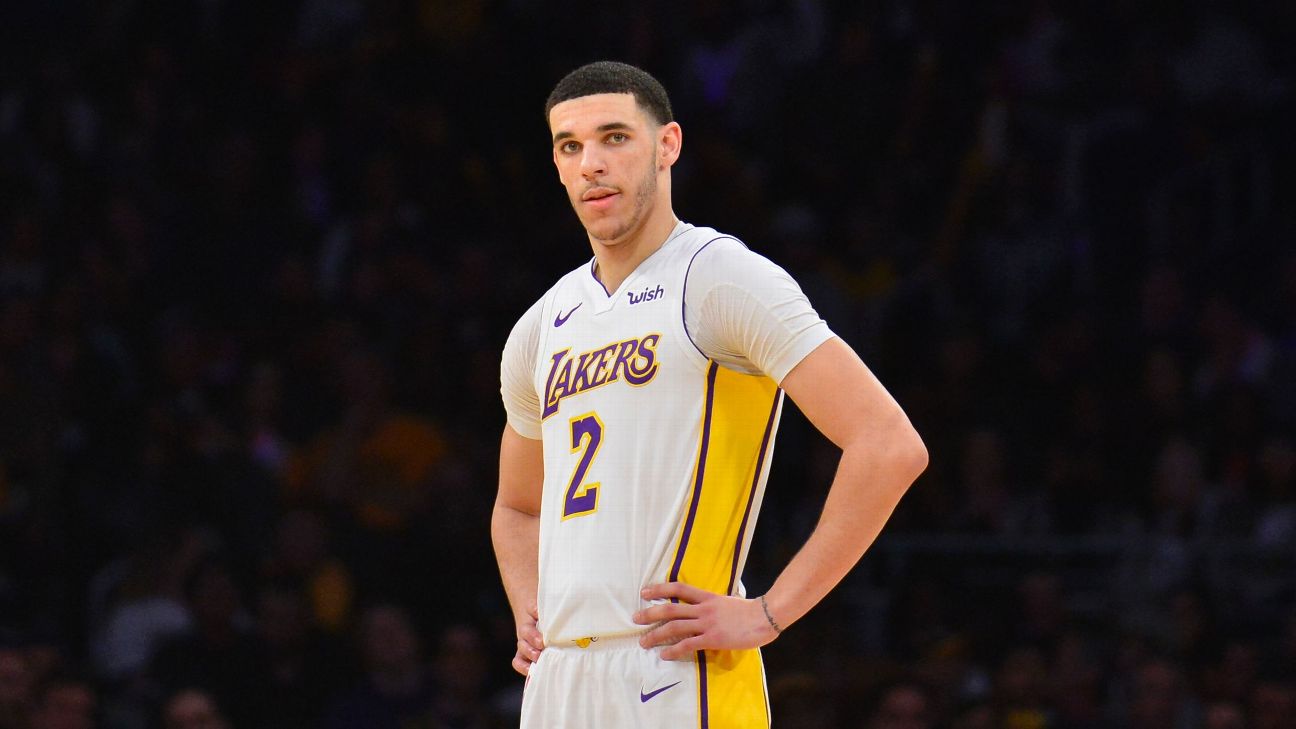 EL SEGUNDO, Calif. -- Entering what Magic Johnson told him will be "the biggest summer" of his life, Lonzo Ball will work on, but not alter, his shot, and he wasn't too concerned about what he showed LeBron James, Paul George and other potential free agents in his rookie season.

"No, the way I play is to help my team win. I am not really worried about who is not here, I am worried about the guys that are here, and I tried to do what I could and help my team out," Ball said when asked if he felt pressure to show star free agents what he could do this season. "So, whether it be LeBron, Paul George or whoever, if they liked it, they liked it. If they didn't, they didn't. I can't do anything about it now."

During the Los Angeles Lakers' exit interviews Thursday, Ball said that Johnson, theteam president, and GM Rob Pelinka told him that this would be the most crucial summer of his life. The 20-year-old must get stronger physically after missing 30 games this season to shoulder and knee injuries. As for his shooting technique, Ball said he would not alter it in any way and that he just planned on working on it through repetition this summer.

Johnson had said earlier in the season that management would see how the 6-foot-6 Ball shot the ball this season and then decide whether the team needed to tinker with his unique shooting form. Ball averaged 10.2 points, 7.2 assists, 6.9 rebounds and 1.7 steals while shooting 36 percent from the field and 30.5 percent from beyond the arc.

"Shoot it with confidence for one, and just keep putting the work in," Ball said when asked what Lakers brass told him about how to improve his shooting and if any changes would be made to his technique. "Don't change your form or nothing. I have been shooting like that my whole life. They said they are fine with it.

"Just make sure I am getting the reps up. Just perfect it pretty much. If you want to be a good shooter, you got to shoot and start making them, and that will translate to the game."

The Lakers are excited about Ball's passing, rebounding, defense and ability to push the pace. But Ball had stretches when his shot was hot but then ice cold, and he has to develop more offense off pick-and-rolls, drives and in the midrange game -- all things he said he would work on this summer.

The No. 2 overall pick in last year's draft also had to deal with constant attention surrounding his outspoken father, LaVar, and even smaller things, like getting a haircut, that went viral.

Ball said his father was not a distraction this season. LaVar criticized Lakers coach Luke Walton earlier in the season and said that the coach had lost the team during a nine-game losing streak in early January.

But he didn't make much noise regarding the Lakers after that, as he spent most of his time in Lithuania with Ball's brothers, LiAngelo and LaMelo, who were playing there professionally. Lonzo Ball was asked if he asked his father to tone things down.

"Nope," Ball said. "Never tell him any of that. He pretty much does what he does, and I do what I do."

Asked if his father was ever a distraction, Ball added: "Nope. First year was all me, and it is done now and on to the next one."

It is a massive summer for Ball and the Lakers. Johnson and Pelinka plan to pursue two max free agents this summer, with James and George the biggest targets if they opt to consider the Lakers. Lakers management has positioned the franchise to be able to potentially clear as much as $70 million in cap space if restricted free agent Julius Randle does not return and the Lakers find a solution, probably the stretch provision, to the $37 million owed to Luol Deng, according to ESPN's Bobby Marks.

The Lakers not only will try to sell free agents on playing in L.A. but also on their young core of Ball, Brandon Ingram, Kyle Kuzma and Josh Hart,who helped the Lakers finish 35-47 -- a nine-game improvement from the previous season despite a rash of injuries.

Kuzma, who averaged 16.1 points and 6.3 rebounds as a rookie, said that no matter who the Lakers get in free agency this summer, Ball knows he has to "bring it" next season.

"I think he's going to attack his mentality," Kuzma said when asked how his best friend on the team will go into the offseason. "There's one thing he needs to do -- for us to be great, no matter who comes here, everything is going to fall on his head no matter if it's a superstar that comes or not. That's just the reality we live in.

"For him and us, we all know he has to bring it next year, and he will for sure."

On Friday, Johnson said Ball and Kuzma would not play in July's summer league. Johnson also said the Lakers had no plans to tinker with Ball's form and that "from this season to next season, you're going to see an improved Lonzo Ball."

"Not going to change Lonzo's shot," Johnson said Friday. "... also, when he was missing, he was off-balance or he rushed it. I told him to watch a lot of film on those two things. When his feet come too close together he is off-balance. And the other times is when he caught it, he felt like he got to get it up fast."

"We have two of the best rebounding guards in this league, Lonzo being one, Josh Hart being the other," Johnson said. "And you think about how he makes his teammates better, Lonzo was the master at that. But now I need him to be more aggressive on the offensive end when he goes to that basket. Now he has to be selfish some and he has to look to score. That's what we talked about, Rob and I to him, and that he has to also develop a couple more shots. The floater ... midrange."