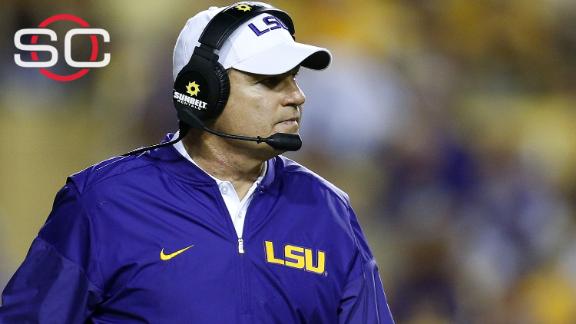 Miles' firing, first reported by the Baton Rouge Advocate, comes one day after LSU lost 18-13 atAuburnwhen referees overruled what had appeared to be a game-winning touchdown. Replay showed that LSU did not start the final play before the game clock hit zero.

"Decisions like this are never easy ones to make," athletic director Joe Alleva said in a statement Sunday night. "Coach Miles has done a tremendous job here and he's been a great ambassador for our University, which makes this even more difficult.

"However, it's apparent in evaluating the program through the first month of the season that a change has to be made. Our commitment to excellence and competing at the highest level is unwavering, and our goals for the remainder of this season haven't changed. We have an obligation to our student-athletes to put them in the best position to have success on the football field each week and we have great confidence that coach Orgeron will do just that."

Sources told ESPN's Chris Low that the decision to dismiss Miles was made late Saturday night after the Auburn game.

So ends the 12-year reign of one of the quirkiest and most popular coaches in SEC history -- one who was as famous for his oddball behavior like eating grass as he was for winning games at an impressive clip.

Miles expected to contend for a national championship with a veteran-laden team this season, but a 2-2 start was enough to bring about the end.

The coaching change is a move that to some degree was 10 months in the making.

"It's always sad to see a man and a coach the caliber of Les get pushed out," said Chavis, who left for Texas A&M following the 2013 season. "He's a Hall of Famer and a legend in the state of Louisiana. I was blessed that he gave me an opportunity to coach at a place like LSU, but I can't say I'm surprised that he's gone. They were trying to fire him when I was there, and I told him so."

Orgeron, 55, is a Louisiana native who began his college career as a lineman at LSU.

He was head coach at Ole Miss from 2005 to 2007, compiling a 10-25 record. He was the interim coach atUSCin 2013 when Lane Kiffin was fired. Orgeron led the Trojans to a 6-2 record that included a win over No. 3 Stanford. He leftUSC when the school chose Steve Sarkisian as coach.

"Coach O brings new energy. He is pumped up. I am excited to play for Coach O,'' center Ethan Pocic said. "It's not easy. College football is a business. The best thing I can do is do whatever Coach O asks us. He's our coach now.''

Miles survived a November coup attempt last year, when consecutive humiliating losses to Alabama, Arkansasand Ole Miss nearly led to his dismissal. Many Tigers fans arrived at the emotional season-ending contest againstTexas A&Mexpecting to see "The Mad Hatter" coach his final game in purple-and-gold, only to learn after the Tigers' 19-7 victory that LSU's administration had decided to keep Miles in charge.

Then circumstances quickly seemed to turn in Miles' favor.

The Tigers wrapped up the 2015 season with a resounding bowl win over Texas Tech then lost just one underclassman -- far fewer than the norm in recent years -- to the NFL draft, allowing LSU to return a whopping 18 starters for the 2016 season. Miles also made a well-received hire, nabbing defensive coordinator Dave Aranda away from Wisconsin, and signed ESPN's No. 3 recruiting class in February, with LSU's 19 ESPN 300 signees matching the best total for any program since ESPN began compiling recruiting rankings a decade ago.

However, the fire under Miles' seat reignited as soon as the 2016 season started, with an impotent offensive performance against Wisconsin producing a 16-14 upset, the Tigers' first season-opening defeat in Miles' 12 seasons in Baton Rouge. The offense had looked a bit better since Danny Etling supplanted Brandon Harris at quarterback early in Week 2 but fell flat again versus Auburn. The Tigers scored just one touchdown on the Plains, and Etling's last-second touchdown pass to D.J. Chark was waved off once replay officials determined LSU did not start the play in time.

Blame Miles' issues on insufficient quarterback recruiting and development or on a general lack of offensive innovation. The bottom line was simply that Miles won less frequently in recent years than he did in the early portion of his Tigers tenure.

It was that second BCS championship game appearance, when then-undefeated LSU lost to Alabama in a rematch from earlier in the season, that many Tigers fans circle as the turning point in Miles' tenure. Alabama won 21-0, but the score hardly describes the level of humiliation that accompanied the Tigers' loss. LSU finished the game with 92 yards of total offense -- far and away the worst offensive performance in BCS title game history.

Since the Tigers fell face-first on that enormous stage, LSU has lost more than three games in each full season and failed to win a division or conference title. The Tigers' winning percentage in that five-year stretch -- 70.9 percent overall and 61.8 percent in conference play -- was well short of the consistency Miles displayed in his first seven seasons (80.6 percent overall, 73.2 percent SEC).

The biggest problem in recent years came in division play, especially when it came time to face Alabama. The Tigers went 2-7 against Ole Miss, Arkansas and Alabama over the previous three seasons and haven't beaten Alabama since the 2011 regular season, a stretch of five straight defeats to the Tide.

Those losses to Nick Saban's SEC powerhouse sometimes came in heartbreaking fashion -- on a last-minute AJ McCarron touchdown pass to T.J. Yeldon in 2012 or a blown late lead in an overtime loss in 2014 -- but the result was always the same. Once again, the Tigers had suffered a loss to their most-hated rival and occupied second-tier status in college football's toughest division.

But the poor start was apparently enough for Alleva and LSU's power brokers to pull the trigger on this long-debated move. They dispatched a coach whose 114-34 record and 77.0 winning percentage are best among modern-day LSU coaches and match up with the most successful coaches in SEC history.

Miles is 16th all time in wins as an SEC coach, one shy of Johnny Majors (Tennessee) and Frank Thomas (Alabama). His overall winning percentage ranks seventh among SEC coaches who spent at least five years in the conference, and his 64 career SEC wins are tied for 10th all time with Tommy Tuberville (Ole Miss/Auburn). 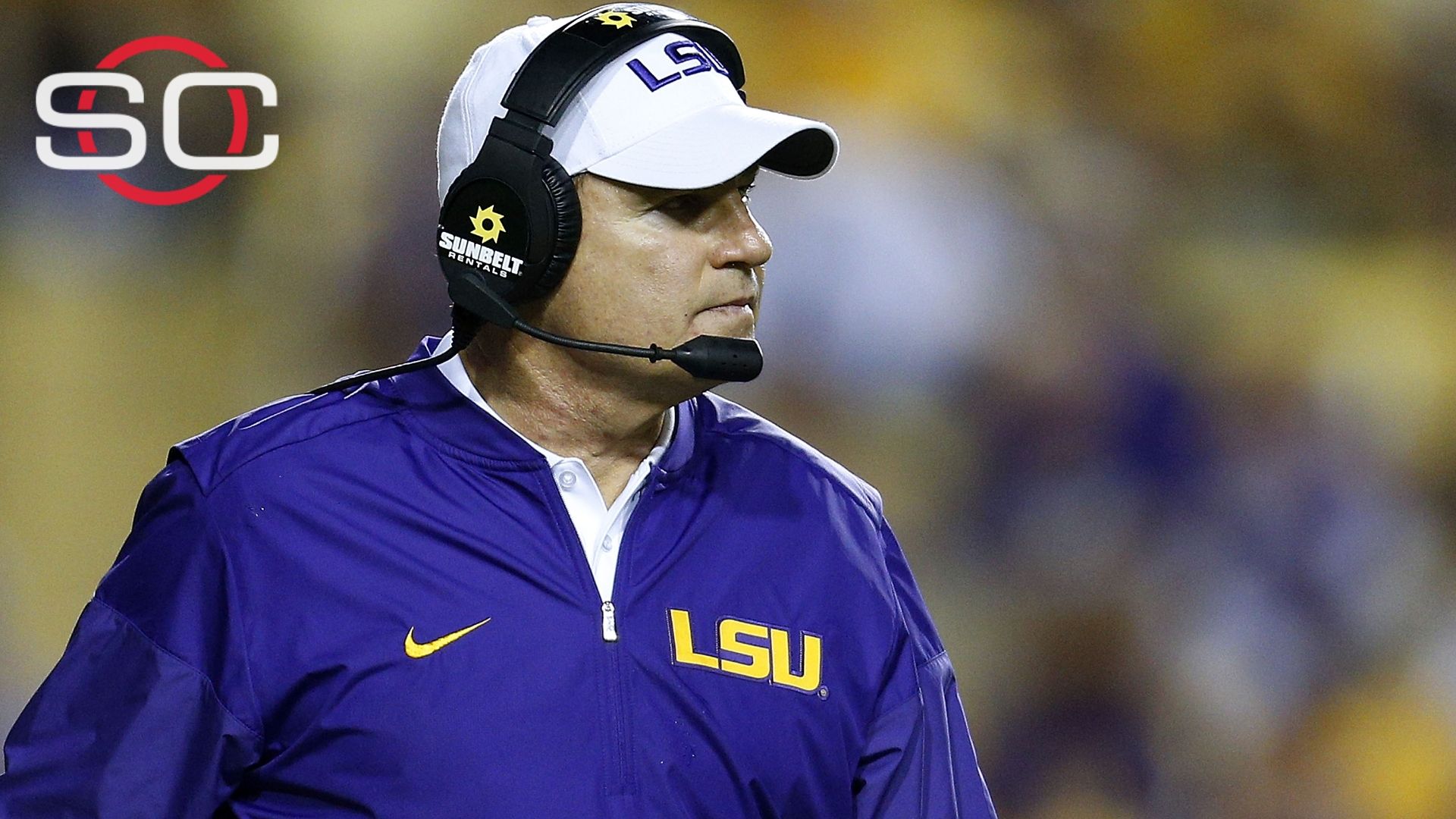 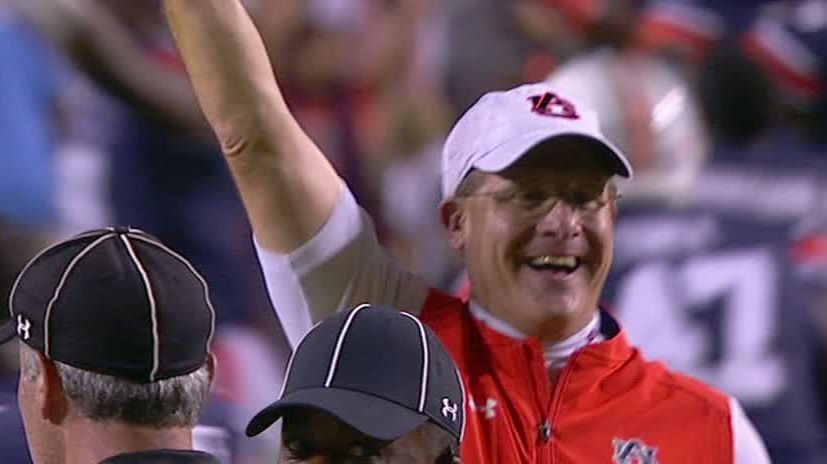