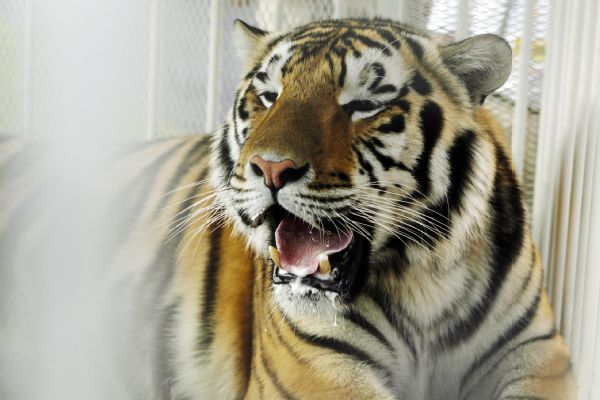 ESPN
BATON ROUGE, La. -- LSU Tigersmascot Mike VIhas an estimated one to two months to live, as a rare form of cancer has spread through his body, a school veterinarian said Wednesday.

Dr. David Baker, of the LSU School of Veterinary Medicine, said a tumor found earlier this year in the tiger's skull has grown despite radiation treatment. A CT scan and physical exam of Mike VI on Monday showed his cancer has spread to the base of his neck and to his lungs and right leg.

"All of these findings carry a very grave prognosis,'' Baker said. "Our current plan is to give the LSU community time to say their goodbyes to Mike. He will be turned out in his yard each day as usual, so long as his condition allows.''

Baker said Mike will be euthanized when the time comes, to prevent the animal from suffering.

"Right now, his behavior and attitude are very normal. I tell people he doesn't know how sick he is,'' Baker said.

"We intend to obtain a young male tiger in need of a good home,'' he added. "So many of these facilities take on perhaps more animals really than they can manage.''

LSU announced in May that the tiger had been diagnosed with a rare and inoperable form of cancer. At the time, veterinarians said treating its spindle cell sarcoma with radiation therapy could extend the 10-year-old tiger's life by one or two more years.

Last month, LSU announced that Mike VI won't take the field during home football games this season; instead, he will remain in his campus habitat.

The 420-pound tiger was 2 years old when he arrived at LSU, donated by an Indiana animal sanctuary. He lives in a 15,000-square-foot enclosure and yard next to Tiger Stadium.

LSU says Mike is one of only two live tiger college mascots in the U.S. and the only one living on a college campus.