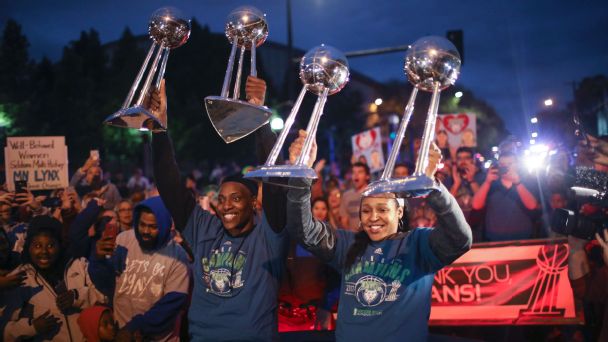 The Minnesota Lynx are champions again. Minnesota and the Los Angeles Sparks provided a fantastic five-game WNBA Finals for the second year in a row. After taking a breath following another great Game 5, let's look back on the 2017 WNBA season and look ahead to 2018.

There were milestones, business and technology advancements, and the emergence of young stars. Here are five things that stood out this year and how they might impact next season:

1. Broadening the fan base and merchandising: The league reached a deal to live-stream 20 games per season via Twitter in 2017, '18 and '19. The idea came from a conversation WNBA president Lisa Borders had with Seattle Storm guard Jewell Loyd, who suggested using Twitter to show games. Borders followed up on it.

The WNBA averaged 613,000 unique viewers for all the games via Twitter this season, with the three most-viewed games averaging 1.1 million.

The league also struck deals with FanDuel to provide daily WNBA fantasy games, and with EA Sports to have the WNBA as part of the NBA Live 18 video game. The first season of FanDuel topped 2.2 million entries.

All of these things bring the WNBA to an audience beyond the fans the league already had. And they help fans, both old and new, to enjoy following the league in different ways. The WNBA always seeks to move more into the so-called "mainstream" sports conversation, and part of that is people having more of a daily interest in games and in the players.

Attendance trended upward this season, with the league having the highest total (1,574,078) and highest average (7,716) since 2011. This was particularly evident for the league's top two teams: The 2016 champion Sparks had their highest average attendance (11,350) since 2002. The Lynx, who on Wednesday won their fourth title, had their best (10,407) since the franchise's inaugural season of 1999.

It's notable that the Lynx did this while playing their regular-season home games at the Xcel Center in St. Paul (home of the NHL's Wild) because the Timberwolves/Lynx home arena, Target Center, has been under renovation. Playing across the river actually seemed to expand the Lynx's footprint in the Twin Cities.

Now, what about more WNBA gear? Nike's eight-year apparel deal with the NBA/WNBA/NBA G League launches with this NBA season, and it has WNBA fans hopeful for a much bigger selection. They want to buy jackets, hats, shirts, shorts, socks, shoes, baby/children's clothes, pet products, etc., that represent their favorite teams, and want more options in sizes (for women, men, gender nonbinary) and colors. The WNBA fans' plea to Nike? Just make it.

Taurasi, 35, and Bird, who turns 37 this month, have been teammates in college, with USA Basketball and overseas. And they have been faces of their respective franchises since being drafted No. 1 (Bird in 2002, Taurasi in 2004).

Neither plans to retire soon, and that's good news for their teams and the league. There was a void in the Indiana Fever franchise this year after Tamika Catchings' retirement, and obviously that will happen someday in Seattle and Phoenix. But Taurasi and Bird have continued to stay at a high level on the court, as Catchings did, and as long as they want to keep playing, the league will be thrilled to have them.

3. Budding superstars: The Connecticut Sun featured young players who grabbed a lot of attention this year, and second-year center Jonquel Jones was the league's Most Improved Player.

Jones put on a show at the All-Star Game, which included a dunk, and she helped lead the Sun to a fourth-place finish in the WNBA at 21-13. Curt Miller was the league's Coach of the Year. Despite a loss to Phoenix in the single-elimination second-round game, the Sun have a lot to look forward to, including the return of post player Chiney Ogwumike, who missed this season with injury.

The Dallas Wings also got an injection of youthful talent, with first-round draft picks Allisha Gray and Kaela Davis from 2017 national champion South Carolina. Gray was the WNBA Rookie of the Year, and both were on the all-rookie team. In the Wings' second year in Dallas, they made the postseason for the second time in the seven years since the former Shock franchise left Detroit.

Seattle has a youthful dynamic duo in Breanna Stewart and Loyd, and both have continued to grow individually. As a team, the Storm struggled all season with consistency, and coach Jenny Boucek was fired in August. Now longtime coach Dan Hughes has come back from a year of retirement to take over in Seattle. Perhaps he can help the Storm live up to their expectations better in 2018.

4. Preparing for the future: There's been a lot of talk about the 2018 draft because of the college/international talent that should be available -- including Diamond DeShields, who bypassed her final season of eligibility at Tennessee and will play professionally this winter.

The Chicago Sky seem to be well-positioned in regard to upgrading talent. The Sky were essentially forced to trade Sylvia Fowles in 2015 and Elena Delle Donne before this season. Both players wanted to move elsewhere.

Under coach/general manager Amber Stocks, the Sky are trying to solidify a group of players who really want to be in Chicago. In Stocks' first year on the job, she led the Sky to a 12-22 mark, and they weren't eliminated from playoff contention until the final weekend.

She also made a trade in late July that sent Tamera Young and Imani Boyette to the Atlanta Dream in exchange for Jordan Hooper and the Dream's first-round draft pick. That means the Sky will have two lottery picks in 2018: theirs and the Dream's.

The date for the draft lottery is still to be announced, but the odds for No. 1 are: San Antonio Stars (44.2 percent), Sky (combined 28.2 percent), Fever (27.6). As the team with the worst combined record for the last two years (15-53), San Antonio not only gets the best odds but also is guaranteed to not get a pick below third. The Stars selected guard Kelsey Plum No. 1 in the 2017 draft.

The Storm, as mentioned, have filled their head-coaching position. The Dream, who fired coach Michael Cooper after the season, have not. And we'll wait to see if any other franchises make coaching moves before 2018. But considering the caliber of next year's draft, there should be a lot of excitement about who's coming into the league in 2018.

5. The Lynx and Sparks are keeping the bar high: There was no letdown by these two teams this season. Their combined records between 2016 and '17 are 55-13 for the Lynx and 52-16 for the Sparks. Their series in those years, including the playoffs, is tied at 8-8. They truly brought out the best in each other.

Age is an unavoidable topic with the Lynx, whose starters were an average of 32.4 years old at the time of the WNBA Finals. But they won the title nonetheless, their fourth in the last seven years. Next year, the Lynx will host the All-Star Game for the first time, and will do so as defending champions. That's a pretty sweet way to celebrate being back at an upgraded Target Center.

The Lynx and Sparks both have made moves in the past few seasons to improve the cores they have. They're likely to do the same this winter. While both teams expect to be challenged not only by each other but also by the rest of the league, it won't be a big surprise if they manage to make it back to the WNBA Finals again next year, too.
Report a correction or typo
Related topics:
sportsespnwnbawnba playoffsespnwcandace parkerwnba finalsmaya moorewnba championsminnesota lynxlos angeles sparkssylvia fowleswnba championnews au espnwlindsay whalen
Copyright © 2022 ESPN Internet Ventures. All rights reserved.
TOP STORIES
1 killed in fiery multi-vehicle crash on 105 Freeway in Paramount
Nurse dies days after being attacked at DTLA bus stop
Stafford, Murray seek first playoff wins when Cardinals visit LA
SoCal coastal areas see damage from tsunami surge
3 people killed after car flies off 210 Freeway in Pasadena
18K ancient Saudi Arabian tombs discovered along 4,500-year-old road
Expect more worrisome COVID variants after omicron, scientists say
Show More
Legendary KABC Radio host Michael Jackson dies at 87
Celebrated Tuskegee Airman Charles McGee dies at 102
Lori Loughlin, Mossimo Giannulli's Hidden Hills home burglarized
FBI identifies hostage-taker at Texas synagogue
LA County reports 53 new COVID deaths, 43,883 more cases
More TOP STORIES News