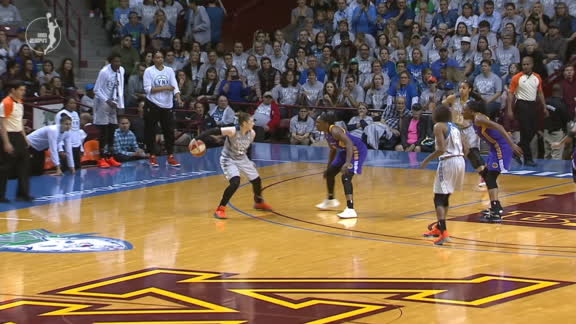 MINNEAPOLIS -- There are moments that win championships, and there are Lindsay Whalen moments. So many of them Wednesday night were one and the same, in the building where Whalen starred for the University of Minnesota and her retired No. 13 hangs in the rafters.

The banner features an iconic photo of a focused, intense Whalen driving for a twisting layup. Whalen flashed that look and that determination multiple times in Game 5, contributing 17 points and eight assists as the gritty Minnesota Lynx outworked and outlasted the Los Angeles Sparks 85-76. Minnesota won a record-tying fourth WNBA title, while Rebekkah Brunson earned her fifth, the most in WNBA history.

In each of those moments the sellout crowd of 14,632 roared as one, a crescendo so loud the raised floor vibrated, as it did in 2004 when Whalen willed the Gophers to the Final Four. "Unbelievable," she said after Wednesday's win.

Whalen made terrific plays throughout, both big and small. A 3-pointer to finish the 7-0 opening run that got the Lynx rolling. A second-quarter pass to Seimone Augustus for a 3-pointer after missing one of her own, prompting Whalen to turn and gesture to the roaring crowd.

But Whalen was at her absolute best in the fourth quarter, with eight points and three assists, accounting for more than half of Minnesota's 25 points in the period.

Lynx coach Cheryl Reeve took a calculated risk and kept Whalen on the floor the whole 10 minutes, which usually doesn't happen. Backup Renee Montgomery generally plays the first five minutes allowing the 35-year-old Whalen to be rested for the final five. But baskets by Candace Parker and Chelsea Gray late in the third quarter cut Minnesota's lead to 60-56, making the whole place nervous, including the coach. Whalen was playing so well that Reeve didn't dare take her off the floor.

"You don't want anybody out there that can't perform because of fatigue," Reeve said. "But I just thought Whalen had a way about her today. If I had taken her out, she might have been really [angry] at me for a long time."

Championship moments were about to happen.

Minnesota called a set play on its first possession, trying to get the ball deep to center Sylvia Fowles. But the play broke down, and Whalen, dribbling at the top of the key, ad-libbed, waving Fowles out of the post so she could take Riquna Williams one-on-one. Whalen backed Williams into the lane, spun and swished a fadeaway jumper. Then Fowles hit a layup off an Augustus feed, to give the Lynx a little cushion.

"I'd like to have run the play the way we had it drawn up," Whalen said. "But sometimes you have to go and make a play, and I had to make a play there."

This is the Whalen the Lynx missed while she sat out the final 12 regular-season games with a broken bone in her left hand -- not the one who went scoreless with no assists in Game 3. On a night all the Lynx hustled and scrapped, outrebounding the Sparks 46-29 and forcing 17 turnovers, Whalen did her part. That basket got the Lynx going again.

"That's Weezy Whalen," Augustus said. "That's the Whalen that we know. She's been waiting for this moment. Obviously she had to sit out a little while with a broken hand. But what she did in that position was what we expect from Whalen any time she's in a tough situation. A great player making a great play."

Two minutes later Whalen drove the lane and laid it in off glass, giving Minnesota a seven-point lead. Candace Parker, so good all night (19 points with 15 rebounds), cut it to four with a 3-pointer. Whalen brought the ball down, lost it under defensive pressure, dove on the floor to get it back and fed Fowles for a layup and a foul shot. On back-to-back possessions Whalen found Augustus and Brunson for jump shots.

"She was so good all game," Reeve said. "And we needed it. It was something that was on our minds. We needed her to be aggressive. Ball pressure was getting to us in other games. She just decided to be very, very aggressive and get to the rim whenever she could."

Brunson followed up her strong Game 4 with another energetic effort (13 points, eight rebounds), and Augustus (14 points, six rebounds, six assists) was good throughout. Fowles, the MVP of the championship series, set two Finals records with her fifth double-double and 20 rebounds. She also had 17 points.

"We just wanted to prove that we still got it, that we've still got a little bit of juice left in the tank," Augustus said.

That they did. Whalen reveled in the locker-room celebration, an orange championship ball cap on her head, a bottle of champagne in her hand and a puddle of bubbly at her feet. "I never drank champagne in The Barn," she said slyly. "Not that anybody knows about."

The way the Lynx won reminded Whalen of a quote former Lynx assistant coach Jim Petersen used to text her before big games. It's from former Houston Rockets coach Rudy Tomjanovich, and the words perfectly describe the championship Lynx as a collective. One year after that heartbreaking loss to the Sparks at home in Game 5, the Lynx got one back, led by their gritty point guard who would not let it happen again.

"We had all those turnovers at the end and they almost came back," she said. "All I have to say is, 'Never underestimate the heart of a champion.'"