Mark Helfrich fired as Oregon coach after worst season since 1991 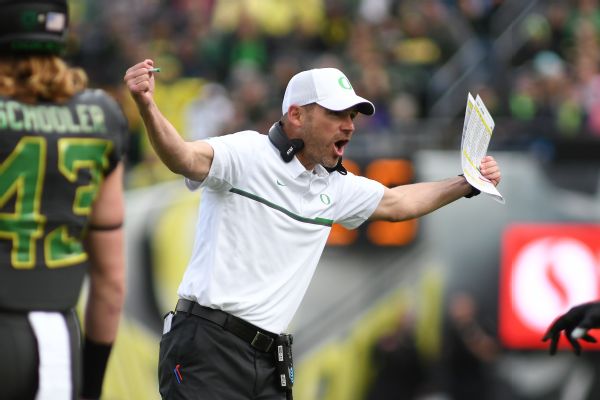 Oregon has fired football coach Mark Helfrich after a disappointing 4-8 season -- and just two years after getting the Ducks within a victory of the program's first national championship.

"We want to thank Mark for his eight years with the University of Oregon and appreciate his efforts on behalf of Oregon football," athletic director Rob Mullens said in announcing the firing.

Helfrich was head coach of the Ducks for four seasons, leading the team to the first College Football Playoff championship game after the 2014 season. But Oregon faltered this season with a five-game losing streak and finished at the bottom of the Pac-12 North with just two conference wins. It was the Ducks' worst season since 1991 (3-8) and marks the first time since 2004 that they won't appear in a bowl game.

"It is a great honor to have served as the head football coach at the University of Oregon," Helfrich said in a statement released by the school. "It is with respect and disappointment that we receive this decision. Plain and simple -- we didn't win enough games this season."

Helfrich met with Mullens on Tuesday night and was told he was being dismissed. At a news conference following the announcement, Mullens said Oregon will look outside the program for candidates and that the new coach will make decisions about the current staff. There is no timeline for a decision, he said, but recruiting adds urgency to the process.

A source told ESPN's Brett McMurphy that the Ducks' next coach needs to be "someone who would reinvigorate ticket sales."

In 2009, Oregon became the first state to adopt a law -- similar to the NFL's "Rooney Rule" -- that requires all public universities to interview a minority candidate for every open head-coaching job.

Mullens said at the news conference that he informed the players of his decision earlier in the evening.

"Those meetings are always difficult, they're highly emotional," he said. "When you're that close in your team, it's a family. It was difficult. Players were upset, because they lost a family member."

Helfrich, whose contract with Oregon includes an $11.6 million buyout, was 37-16 as head coach of the Ducks. He was Oregon's offensive coordinator under innovator Chip Kelly, taking over the top job in 2013, when Kelly went to the NFL.

Kelly, now coach of the 49ers, addressed rumors of a potential return to Eugene earlier this month.

"I'm not looking to go back, and that's what I've always said, so I don't know how it's stayed a story," he said.

The Ducks began this season ranked No. 24 in the preseason AP Top 25 but lost 35-32 at Nebraska in the third week of the season, starting a five-game losing streak, the team's longest since 1996.

The Ducks had a brief revival with a 30-28 victory over then-No. 11 Utah in Salt Lake City two weeks ago, but they ended the season with a 34-24 loss to rival Oregon State in the 120th Civil War game on Saturday. The loss snapped an eight-game Oregon winning streak in the series.

"Nobody's job is safe in college football," he said. "That's just the nature of the beast."

Fan discontentment with Helfrich grew as the season dragged on and wins were scarce. Some questioned the wisdom of new assistant Brady Hoke's defensive scheme and the reliance on graduate transfers at quarterback for the past two seasons, rather than long-term player development.

"Didn't win enough games. I mean, that's blunt. But that's the fact. We have to own that part of it. And own the solution," Helfrich said following the loss to the Beavers.

In addition to Oregon's losing record this season, the school's announcement on Tuesday night pointed to the Ducks' dependence on graduate transfers in 2015 and 2016. It also noted lopsided losses to Washington, USC and Stanford this season and the Ducks' failure to convert on four of five 2-point attempts following touchdowns in the narrow loss to Nebraska.

Whatever the reason, Oregon's slide was a reminder of how hard it is to get good. And stay good.

When Helfrich was promoted into the job at the start of 2013, he had the daunting task of replacing Kelly, who orchestrated Oregon's hyperdrive spread-option offense and led the Ducks to their first national championship game appearance in 2010. An affable native Oregonian, Helfrich had served as offensive coordinator under Kelly and recruited and groomed future Heisman Trophy winnerMarcus Mariota.

Helfrich went 24-4 in his first two seasons, including a loss to Ohio State in the first College Football Playoff championship. But last season, he was challenged with replacing Mariota. He lured graduate transfer Vernon Adams from Eastern Washington, but Adams struggled with injury.

The cracks were showing in that 9-4 season, the first with fewer than 10 wins since 2007. A loss at Michigan State and defeats at home to Utah and Washington State pushed Oregon out of the AP Top 25 for the first time since 2009. The ultimate embarrassment came in the Alamo Bowl, when the Ducks surrendered a 31-0 lead and TCU staged the biggest comeback in bowl history to win 47-41 in triple overtime.

This season, the Ducks brought in another graduate transfer at quarterback, Dakota Prukop from Montana State. But after five starts, Prukop was benched in favor of true freshman Justin Herbert.

Herbert was one of the few bright spots in the dismal season, throwing for 1,936 yards and 19 touchdowns, with four interceptions, in nine appearances.

The overwhelming drag on Oregon's success appeared to be the defense. The Ducks, who switched to a 4-3 scheme under Hoke, spent most of the season mired in the bottom of the NCAA defensive rankings. At times, it appeared the players didn't know their assignments.

The defensive shortcomings were readily apparent in Oregon's 70-21 loss at home to No. 5 Washington on Oct. 8. Huskies quarterback Jake Browning threw for six touchdowns in the victory, which snapped a 12-game losing streak to the rival Ducks. And the issues on defense were again on display Saturday against the Beavers.

Helfrich is the first head coach Oregon has fired since Don Read in 1976.

Mullens -- who had been in Texas until Tuesday, taking part in meetings with the College Football Playoff committee -- said he waited to meet with Helfrich to put some distance between the emotions of the final loss.

"No one wanted Mark to be more successful than me," Mullens said. "We were not competing in a number of games, and we were on a poor trajectory."

In the statement on Tuesday night, Helfrich thanked his wife and family, the campus community, the fans and his coaches and their families.

"Finally, to the players -- thank you, and I love you," he said. "The future is bright for this young, talented team, and we will be supporting them and their new leadership." 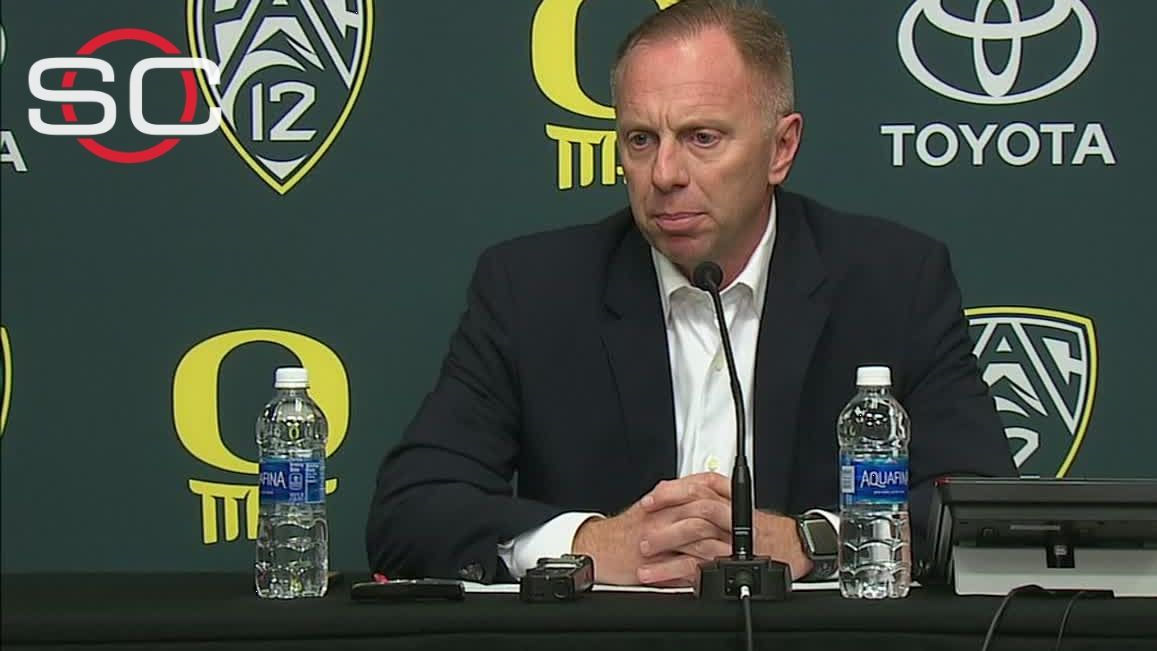 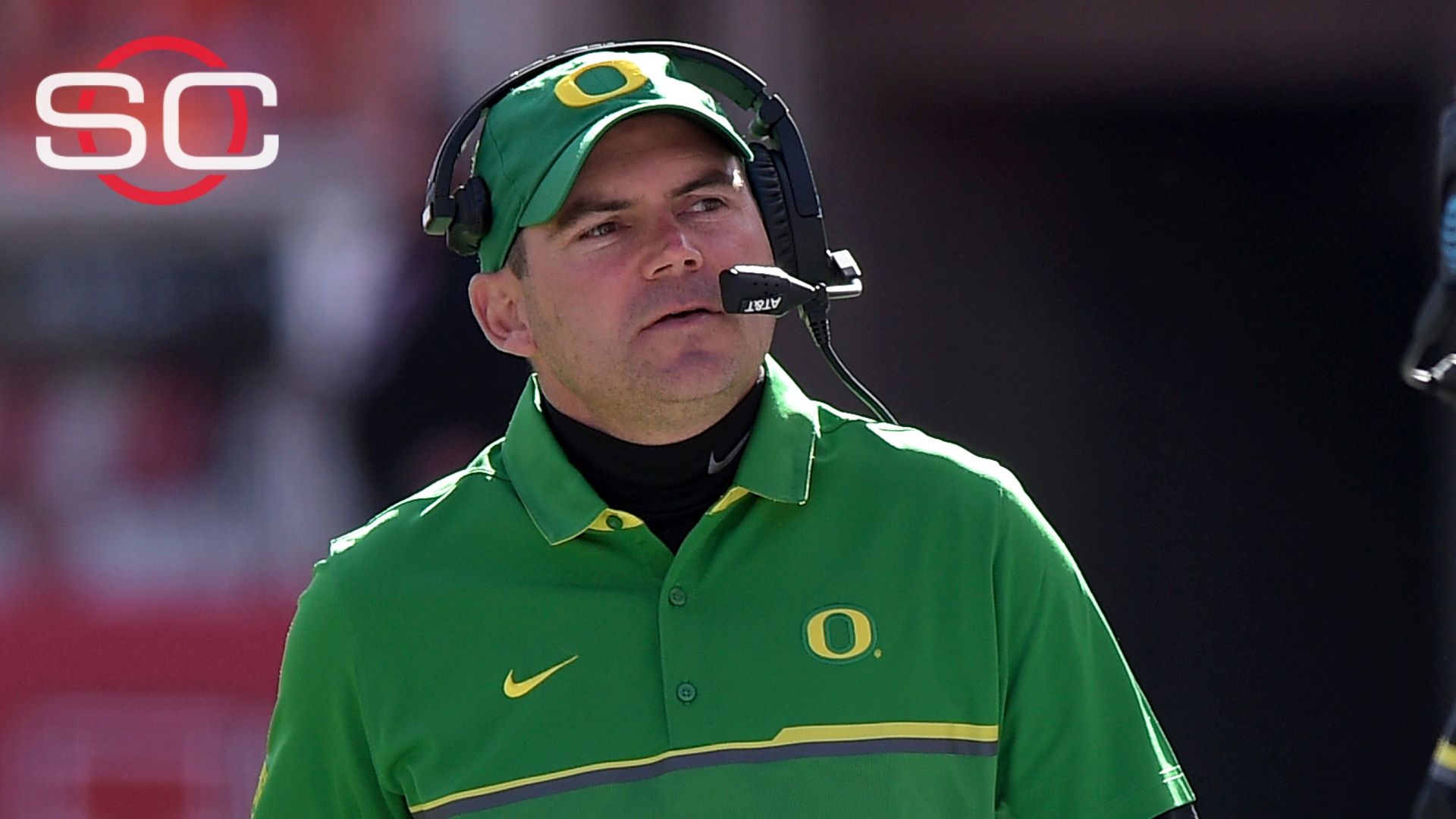