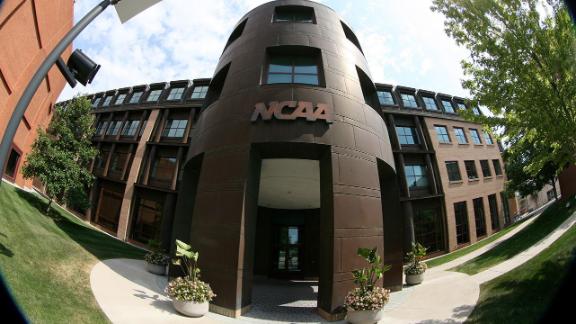 CHICAGO -- The NCAA agreed Tuesday to settle a class-action head-injury lawsuit by creating a $70 million fund to diagnose thousands of current and former college athletes to determine if they suffered brain trauma playing football, hockey, soccer and other contact sports.

College sports' governing body also agreed to implement a single return-to-play policy spelling out how all teams must treat players who received head blows, according to a Tuesday filing in U.S. District Court in Chicago. Critics have accused the NCAA of giving too much discretion to hundreds of individual schools about when athletes can go back into games, putting them at risk.

Unlike a proposed settlement in a similar lawsuit against the NFL, this deal stops short of setting aside money to pay players who suffered brain trauma. Instead, athletes can sue individually for damages, and the NCAA-funded tests to gauge the extent of neurological injuries could establish grounds for doing that.

Ramogi Huma, president of the National College Players Association, told ESPN's Tom Farrey that the NCPA objects to the settlement because it includes no money for players who have been concussed, forcing them to sue their schools to pay for any treatment related to concussion symptoms.

"There's also no support for players actually suffering from those conditions, from effects of TBI [traumatic brain injury] from that sport," Huma said. "They should have gotten support for players as part of the settlement rather than forcing players to fend for themselves."

Huma told ESPN the settlement also falls short of protecting current players because it does not mandate new return-to-play protocols. Instead, the NCAA and the plaintiffs agreed that remaining guidelines for schools and the implementation of those guidelines are subject to the NCAA's rule-making process.

"And we know what the regular NCAA rule-making process is like. It could take years, or they could shoot it down," Huma said. "The settlement represents yet another refusal of the NCAA to protect players from unnecessary brain trauma. Instead of agreeing to rules that protect players' brains by reducing contact in practices and mandatory return-to-play protocols, such protections would remain optional."

Steve Berman, one of the lead lawyers who cut the deal on behalf of the plaintiffs, described to ESPN how the process will unfold for the 4.2 million players affected by the settlement.

If the judge approves the deal later this year, athletes will receive a notice in the mail telling them: "If you think you have symptoms, fill out a medical questionnaire online that is developed by a team of doctors. You'll have a score. If you score at certain level, that means there's a chance you have a concussion-related injury."

That questionnaire will be designed by a four-person medical science committee that includes NCAA chief medical officer Brian Hainline and noted concussion doctor Robert Cantu. Should players have a score indicating they probably are exhibiting symptoms from a sports-related concussion, they will then have the option of going to a testing center where a specialist can evaluate them -- a $4,000 value -- and, if necessary, recommend further treatment.

Athletes will pick up the cost of any treatment, Berman said. They have the option of suing their school to seek personal injury damages, though he said it will be hard for athletes prior to 2004 to make viable claims. He said that was the year when the international community came to consensus on concussion management through a conference in Zurich.

"The NCAA did not implement those standards, and we believe they had a duty to do so," said Berman, who already has lawsuits pending in which players are suing schools over alleged concussion-related damage. "In 2004, people realized that concussed athletes should never return to play that day and that certain steps needed to be taken before they could return to play."

Michael Hausfeld, another lawyer whose firm has been involved in the concussion litigation, said he anticipates many lawsuits filed by players. He said it was still possible they could pursue those claims as a class, or group, and that both the individual schools and NCAA could be targeted.

There is no cutoff date for when athletes must have played a designated sport at one of the more than 1,000 NCAA member schools to qualify for the medical exams. That means all athletes currently playing and those who participated decades ago could undergo the tests and potentially follow up with damage claims.

The filing serves as notice to the federal judge overseeing the class-action case that the parties struck a deal after nearly a year of negotiations. In addition to football, ice hockey and soccer, the settlement also applies to all men and women who participated in basketball, wrestling, field hockey and lacrosse.

Joseph Siprut, the lead plaintiffs' attorney who spearheaded talks with the NCAA, said the sometimes-tough negotiations ended with a deal that will make college athletics safer.

"I wouldn't say these changes solve the safety problems, but they do reduce the risks," the Chicago attorney said Tuesday. "It's changed college sports forever."

The NCAA, which admits no wrongdoing in the settlement and has denied understating the dangers of concussions, hailed the settlement.

"This agreement's proactive measures will ensure student-athletes have access to high quality medical care by physicians with experience in the diagnosis, treatment and management of concussions," Hainline said.

Siprut said that stricter oversight and return-to-play rules should help ensure the viability of football by allaying the fears of parents who are currently inclined to not let their kids play.

"Changes were necessary to preserve the talent well of kids that feeds the game of football," he said. "Absent these kinds of changes, the sport will die."

To keep the NCAA from having to hold unwieldy talks with multiple plaintiffs, 10 lawsuits filed from Georgia and South Carolina to Minnesota and Missouri were consolidated into the one case in Chicago, where the first lawsuit was filed in 2011. Combined, the suits identified several dozen athletes by name as having suffered brain trauma.

The lead plaintiff is Adrian Arrington, a former safety at Eastern Illinois. He said he endured five concussions while playing, some so severe he has said he couldn't recognize his parents afterward. Subsequent headaches, memory loss, seizures and depression made it difficult to work or even care for his children, filings said.

Another named plaintiff is former Central Arkansas wide receiver Derek K. Owens. After several concussions, he said he found he could no longer retain what he had just studied. His symptoms became so severe that he dropped out of school in 2011, telling his mother: "I feel like a 22-year-old with Alzheimer's."

Among other settlement terms, all athletes will take baseline neurological tests to start each year to help doctors determine the severity of any concussion during the season, concussion education will be mandated for coaches and athletes, and a new, independent medical science committee will oversee the medical testing.

As proof the NCAA has tried to mitigate the risks of concussions, it has cited recent changes in equipment, medical practices and playing rules, including ones prohibiting football players from targeting an opponent's head or neck.

The NCAA also announced in May a three-year, $30 million concussion study co-funded by the U.S. Defense Department. Plans call for initial data collection on about 7,200 athletes from 12 colleges, increasing to 37,000 athletes at 30 sites, with the aim of better understanding concussions and developing better prevention methods.

The settlement is still subject to approval by U.S. District Judge John Lee in a process that could take months. He must grant preliminary approval and then, after affected athletes weigh in, give a final OK.

Plaintiffs' filings say the number of athletes who may require testing to learn if they suffered long-term damage runs into the tens of thousands. They cite NCAA figures that, from 2004 to 2009 alone, 29,225 NCAA athletes suffered concussions -- including about 16,000 in football, 5,751 in women's soccer and 3,374 in men's soccer.

NCAA Settles Concussion Lawsuit
Mike Golic and Mike Greenberg react to the news that the NCAA has settled a class-action head-injury lawsuit and agreed to create a $70 million fund to evaluate concussions.