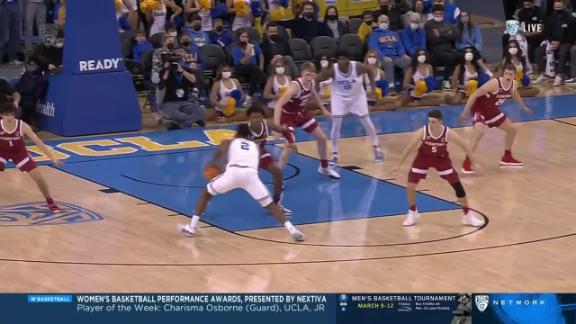 LOS ANGELES -- - Jules Bernard scored 16 points and No. 7 UCLA stymied Stanford's shooters in a 66-43 victory on Saturday night to regain sole possession of first place in the Pac-12.

The Bruins (16-2) won their sixth in a row and improved to 8-1 in league play, snapping a tie atop the league standings with idle Arizona.

Isa Silva scored eight points off the bench to lead Stanford (12-7, 5-4), which had its two-game winning streak snapped. The Cardinal never led and struggled from the start, making just one basket in the game's first six minutes.

UCLA narrowly missed holding an opponent to 12 field goals or fewer for the first time since beating Notre Dame on Jan. 29, 1972. Silva scored inside for Stanford's 13th and final field goal with 26 seconds remaining.


UCLA raced to a 31-10 lead to start the game. The Cardinal was stuck on 10 points for nearly six minutes. Stanford made just 5 of 25 shots in the half and committed 14 turnovers, allowing UCLA to score that many points on the miscues.

The Bruins endured their own scoring drought late in the half before Kyman and David Singleton hit back-to-back 3-pointers to send them into the break leading 37-18.

The Cardinal was held under 20 points in a half for the first time since November, when it had 20 against Baylor.

Stanford: The Cardinal failed in their bid to sweep the LA trip for the first time since 2004-05, but they earned a big win over No. 15 USC. Now they head home for four straight games where they are 8-1, winning five of those by double digits. They'll play the Bruins again in 10 days.


UCLA: The Bruins completed a big week at home, winning three games, including against No. 3 Arizona, and improving to 9-1 at Pauley Pavilion. They took the last two without Juzang. Jaylen Clark missed his third straight game while in concussion protocol. The Bruins' defense was key in all three wins.

Stanford: Hosts California on Tuesday to open a four-game homestand.

UCLA: Visits No. 3 Arizona on Thursday, nine days after the Bruins won by 16 points at home.