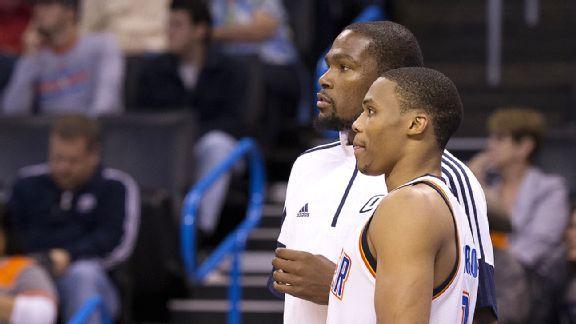 The injury-riddled Oklahoma City Thunder might have the second-lowest winning percentage in the NBA, but help could be on the way as both Russell Westbrook and Kevin Durant could return Friday, according to the Oklahoman.

The Thunder's star duo practiced with the team Monday for the first time since both went down to injury.

"They did participate and looked good," coach Scott Brooks said.

Durant, the reigning league MVP, is recovering from a stress fracture in his foot, while Westbrook is working his way back from a broken hand.

"This week, I don't know what day, they'll get evaluated and we'll go from there," Brooks said. "They'll continue to go through this process and when they're ready -- 100 percent ready -- they'll play."

When asked about the availability of Westbrook -- the more likely of the two to return Friday -- Brooks declined to rule out his All-Star guard.

"Don't know," Brooks said, according to the newspaper. "Just focus on his work he put in today and continue to build on that. He'll get evaluated later on this week and we'll make some of those decisions later on."