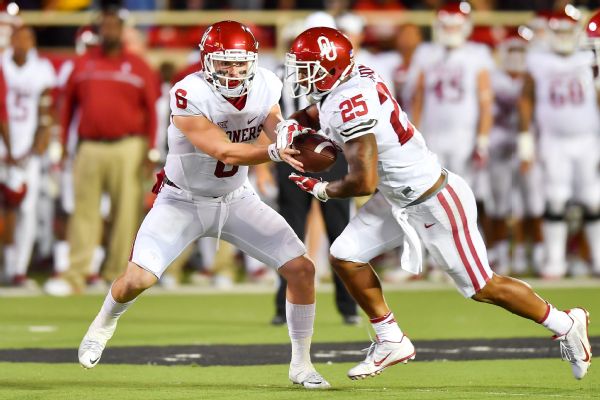 At least seven FBS records were broken or tied, according to ESPN Stats & Information research.

The Sooners and Red Raiders shattered the FBS record for combined yards in a game with 1,708 -- both sides finished with 854 yards apiece. The previous record of 1,640 yards was set by San Jose State and Nevada in 2001.

Texas Tech quarterback Patrick Mahomes II tied the FBS record for passing yards in a game with 734.Washington State's Connor Halliday had previously held the record in 2014. Mahomes was one passing attempt shy of tying Halliday for the FBS record of 89 attempts in a game. Mahomes' 819 yards of total offense also set a new FBS record.

"Someone told me [about tying the passing record] in the locker room," Mahomes said. "But, like I said, we didn't win the game, so it really didn't matter."

On the other side, Oklahoma became the first offense in FBS history to feature a 500-yard passer, 200-yard rusher and 200-yard receiver.

Sooners quarterback Baker Mayfield, in his first game in Lubbock since transferring from Texas Tech in 2013, threw for 545 yards and a school-record seven touchdowns.

"I told some of the guys at halftime, 'If you're scared and you don't want to score every drive, then stay in here,'" Mayfield said.

"He's phenomenal," Texas Tech coach Kliff Kingsbury said. "He's just better than anybody we had on the field."