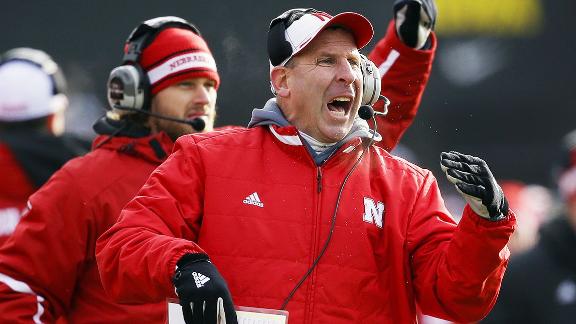 Bo Pelini was introduced as Youngstown State's new coach Wednesday, but his departure from Nebraska continues to overshadow his Ohio homecoming.

According to a report in the Omaha World-Herald, Pelini lashed out at Nebraska athletic director Shawn Eichorst during a meeting with Huskers players that was held at a high school in Lincoln on Dec. 2, two days after he was fired as coach. The World-Herald obtained an audio recording of Pelini's address to the players, in which the coach used profane terms to describe Eichorst.

"A guy like him, who has no integrity, he doesn't even understand what a core value is," Pelini said, according to the contents of the tape. "He hasn't understood it from the day he got here. I saw it when I first met with the guy. To have core values means you have to be about something, you have to represent something that is important to you. He's a f------ lawyer who makes policies. That's all he's done since he's been here: hire people and make policies to cover his own ass."

Pelini, in the tape, told players he had no relationship with Eichorst and received no support from him. Players lashed out at Eichorst on social media after Pelini's firing. Pelini was 67-27 in seven seasons and won nine or more games in each season.

"Look who he circles himself with," Pelini said of Eichorst. "Look at his team of people. C'mon, man. I'd rather f------ work at McDonald's than work with some of those guys. Not that there's anything bad about working at McDonald's."

Nebraska issued a statement Wednesday after the World-Herald's story began to circulate, saying it had a transcript of the remarks but not the actual audio and that it hadn't been able to authenticate the transcript. Still, that didn't stop the school from condemning Pelini.

"If these comments were, indeed, spoken by Mr. Pelini, we are extremely disappointed, but it only reaffirms the decision that he should no longer be a leader of young men at Nebraska," Nebraska's statement read. "His habitual use of inappropriate language, and his personal and professional attacks on administrators, are antithetical to the values of our university. His behavior is consistent with a pattern of unprofessional, disrespectful behavior directed by Mr. Pelini toward the passionate fans of Nebraska, employees of the university and, most concerning, our student-athletes.

"This behavior is not tolerated at the University of Nebraska and, among many other concerns, played a role in his dismissal."

Eichorst also had said Pelini's record in the "games that mattered" contributed to his dismissal and that some off-field expectations were not met.

According to the World-Herald's account, Pelini expressed support for the players and thanked them for their effort during the season, especially in a Nov. 29 come-from-behind win against Iowa. But the coach said the job and the difficulties he had with the administration took a toll.

This isn't the first profanity-laced Pelini rant to reach the public. In September 2013, Deadspin published an audio tape of Pelini criticizing Nebraska fans and media following a win against Ohio State in 2011.

"You can't let this place eat you up, because if you let it, it will eat you up," Pelini told players at the Dec. 2 meeting. "I have been at LSU, I have been at Oklahoma, I have been to these other places. The scrutiny, negativity, it ain't like that everywhere. But it is what it is and you gotta be strong as hell and you gotta stick together to deal with it. You have to. Because it's real."

At the time of his firing by Nebraska, Pelini was due a $7.9 million buyout. There is no non-disparagement clause in that contract that would affect his severance.

"I believe that I have a great situation here," the 47-year-old Pelini said, "have a tremendous athletic director, have a president who understands football, who's going to support me, something that I don't know if I've ever had," a veiled reference to Nebraska chancellor Harvey Perlman.

Pelini said Wednesday he would lean heavily on Tressel for advice as he transitions to the new job.