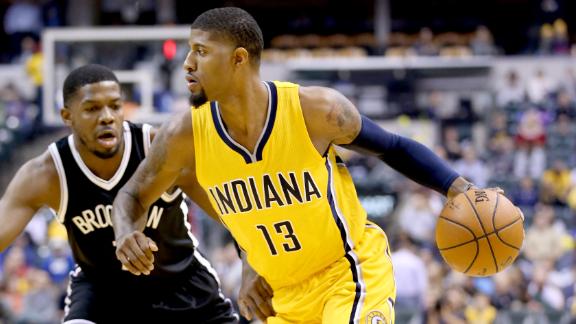 The penalty comes less than 24 hours after George blasted officials following the team's 104-97 victory over the visiting Brooklyn Nets on Friday night.

"The stripes [were] terrible," George told the team's local TV station, Fox Sports Indiana. "We [had to] go out and just play. The way this game was going and how they [were] calling it, we had to play. ... It's frustrating, but hopefully the league does a better job of looking at s--- like this."

Throughout the game, George appeared visibly frustrated with the officials over calls that didn't go his way.

Late in the third quarter, Pacers coach Frank Vogel received a technical after he expressed his opinion that George was fouled on a drive to the basket.

Vogel declined to comment on the officiating after the game.

According to The Indianapolis Star, George said a disparity in foul calls "has been going on for a long time."

"It's frustrating when the guys I'm matched up with have less fouls than I do, and they're not attacking as much as I'm attacking," George said Friday, according to The Star.

His harsh assessment of the officials wasn't his first.

George, a two-time All-Star who will make $17,120,106 this season, was fined $10,000 by the NBA for publicly criticizing officials after Indiana's season-opening loss to the Toronto Raptors.

In February 2014, George tweeted a message to commissioner Adam Silver, telling Silver to get rid of all the officials in place.

George was back on the court Saturday night, scoring 29 points in the Pacers' 96-84 loss to Memphis Grizzlies.

Information from ESPN's Mike Mazzeo was used in this report.