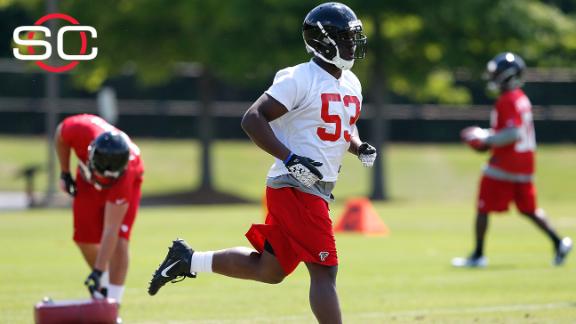 In a letter sent Thursday to Arthur Blank, PETA commended the Atlanta Falcons' owner for releasing Prince Shembo last week after the linebacker was arrested for killing a dog and suggested the team start empathy training for its players.

The charges against Vick caused a national uproar over dogfighting in 2007. That same year, Falcons defensive tackle Jonathan Babineaux, who is still with the team, was arrested for his alleged involvement in the death of his girlfriend's dog, but the charges were later dropped.

"Professional athletes are role models in our society, so it's critical for NFL teams to send their players the message that bullying and abusing anyone is unacceptable," Ingrid E. Newkirk, the president of People for the Ethical Treatment of Animals, wrote in the letter.

"We would again suggest, as we have in the past, that requiring all athletes to receive empathy training would give them more self-respect and positive guidelines for how to behave toward others. Former Atlanta Falcons quarterback Michael Vick completed our eight-hour basic class in empathy and animal protection at PETA's headquarters following his arrest for dogfighting crimes. Perhaps if he had taken such a course earlier, he might never have caused such suffering and brought disrepute to his team and the league."

On Tuesday, coach Dan Quinn said he believed the team made the right decision to cut ties immediately with Shembo.

A report from the Gwinnett sheriff's office said that Shembo killed the tiny Yorkshire Terrier on April 15. Quinn and the Falcons didn't learn of the incident until last Friday when the player was arrested. Jail records show that Shembo posted a $16,700 bond.

The Falcons drafted Shembo out of Notre Dame last year. He played in 16 games with three starts, but there were some off-the-field questions about Shembo coming out of college.

Dimitroff said on draft day last year that the Falcons thought Shembo was worth the fourth-round pick the team used to select him.

"We're very, very aware of the seriousness of the incident, and obviously it's a sad situation for the young lady involved," Dimitroff said then. "We've done a lot of research on many levels from our security standpoint, and from all the research we did at Notre Dame, he was never charged, never suspended from the team or the school."