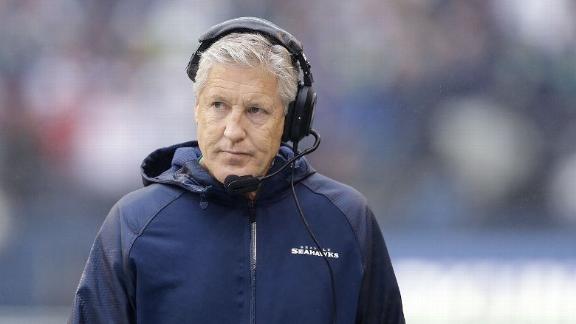 Seattle Seahawks coach Pete Carroll now has a Super Bowl title on his résumé. But he wouldn't have that Lombardi Trophy had he known what sanctions awaited the USC football program in June 2010.

Carroll told the Los Angeles Times he would not have left the Trojans in January 2010, if he knew what penalties the NCAA was going to impose after it determined Reggie Bush and his family received money and other benefits from sports marketers.

"The truth was, an opportunity came up and it was one I couldn't turn away from," Carroll told the Times. "... The NCAA came back at the university ... 'Now we're going to revisit after five years.' I had no knowledge that was coming. We thought maybe it wasn't coming because they didn't have anything to get us with. It wasn't five days, it wasn't five weeks. It was five years. Had we known that that was imminent ... I would never have been able to leave under those circumstances. When I look back now, I would have stayed there to do what we needed to do to resolve the problem."

USC was hit with a two-year bowl ban, lost 30 scholarships over three years, and had to vacate its 2004 national championship and all 12 wins in 2005.

Carroll, who led USC to six BCS bowl game victories, said in 2010 that he "never thought there were any facts that supported significant sanctions." Prior to this year's Super Bowl, Carroll said the criticism over his perceived abandoning of USC was unfair.

"In house [at USC] and by myself, Pete Carroll is revered," Haden told the Times. "He did a lot of things incredibly well here."

Carroll: No USC Exit If I Knew Of Sanctions
NFL insider Adam Caplan discusses Seahawks coach Pete Carroll's comments that he would not have left USC for the NFL if he knew the school would be sanctioned.