Predators ready to respond to Ducks' physical play in Game 3 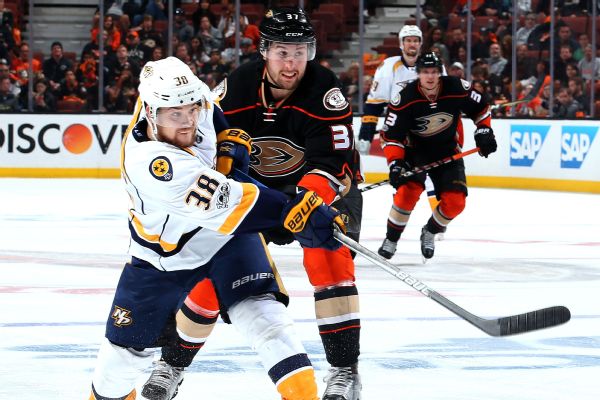 NASHVILLE, Tenn. -- The Nashville Predators finally are facing their first real adversity this postseason, with the Anaheim Ducks eager to push, hit and poke them out of what's already been a historic run.

The Predators insist they can play that game too -- and keep their cool no matter what pesky Ducks center Ryan Kesler does.

Nashville center Ryan Johansen vented his frustration at how Kesler plays after the Ducks rallied twice in pulling out a 5-3 win Sunday night that tied the Western Conference finals at a game apiece. Johansen said he didn't know how anyone could cheer for a guy like that constantly prodding and poking. Each picked up a penalty, with Johansen high-sticking Kesler off a faceoff.

"That's playoffs written all over it," Predators forward Colton Sissons said Monday. "Obviously, there's some bad blood there, and they've been competing hard and battling all series. It's only going to get escalated from here."

Johansen wasn't among the Predators who spoke once they landed in Nashville. After the game, he said he just has to focus on his game. Nashville coach Peter Laviolette said he hadn't heard or read Johansen's complaint about Kesler but defended his 24-year-old center.

Ducks defenseman Josh Manson said Kesler would be in his head a little bit if he was playing against one of the finalists for the Selke trophy given to the NHL's best defensive forward.

"He's a guy that you love to have on your team and you hate to play against," Manson said. "So you watch throughout the series and throughout the playoffs, so far he takes pride in throwing guys off their game. So hopefully it is working."

How much Kesler has gotten under Johansen's skin and whether the 32-year-old veteran can shake the anchor of Nashville's top line remains to be seen. The Chicago Blackhawks were unable to disrupt the Predators during their first-round sweep, and St. Louis won twice on home ice by drawing penalties in a series the Predators finished in six games .

So far, the Predators have matched the Ducks nearly hit for hit and still have the home-ice advantage in this series.

Game 3 is Tuesday night in Nashville, where the Predators have won nine straight playoff games dating to last year, including a league-best 5-0 this postseason. The streak started in Game 6 of their first-round win over the Ducks after Anaheim took both Games 3 and 4, outscoring the Predators 7-1.

That is why the Ducks feel pretty comfortable heading to Music City after avoiding an 0-2 deficit for a second straight series. They also have a 4-1 road record after sweeping Calgary and winning twice in Edmonton .

"We believe that we can go in any building and play with the teams that we're up against and give ourselves a chance for success," Ducks coach Randy Carlyle said.

For some Ducks, this will be their first chance at hearing just how loud Bridgestone Arena is in the playoffs.

"I've seen games on TV and played there in the regular season," said Nick Ritchie, a 21-year-old forward. "They'll have a pretty big crowd, obviously. We've been a good team on the road. We're just going in there and going to try to take care of business."

That means crunching the Predators whenever possible, a style the Ducks play very well. That includes Jared Boll, who had only three points in 51 games during the regular season but has played each of the first two games against Nashville. The 6-foot-3 forward has three combined hits throwing his big body around, including a big check on Calle Jarnkrok in the opener.

The Predators also have been physical, and defenseman P.K. Subban said he thinks they've been doing a good job so far, particularly Johansen. The center has multiple points in three straight games and just tied the franchise record for most points in a postseason with 13.

The Ducks' style might be taking a toll on the Predators' power play. Nashville scored four goals on its first 10 power plays on the road this postseason but now are 0 of 8 on the man advantage against Anaheim, including failing to convert through 88 seconds of a 5-on-3 in the opener.

Now Laviolette will have the last change, though he didn't tip his hand at any possible adjustments.