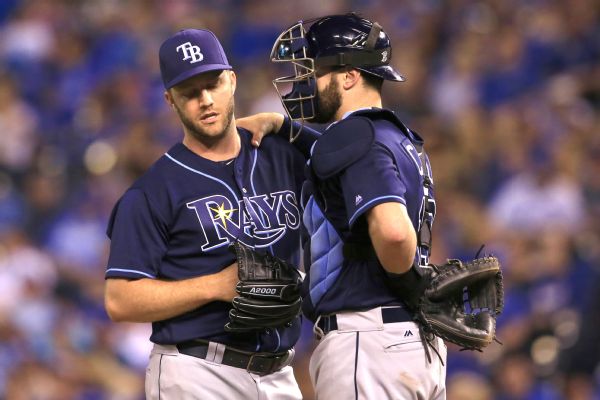 PORT CHARLOTTE, Fla. -- Major League Baseball made game-calling more difficult for catchers this winter when it changed the rules governing mound visits. For backstops with the Tampa Bay Rays, things got even trickier when the club announced plans for a four-man rotation to open the season.

Pitching coach Kyle Snyder had an idea to help, and catchers Wilson Ramos and Jesus Sucre were eager to hop on board -- quarterback-style wristbands loaded with information designed to help with pitch calling.

The Rays are joining the Indians, Mets and some others as teams arming their catchers with data-filled forearm sleeves. Tampa Bay hasn't decided precisely what will be on the wristbands, though it will mostly include information on signs and strategies for attacking opposing hitters. The cards will have a flap to make sure opponents and cameras can't catch what's been written down.

"If you have all that on the wristband, it's going to be a lot easier for you," Sucre said.

Catchers like David Ross, Evan Gattis and Yasmani Grandal have used the wristbands to manage information in baseball's big data era, but Rays manager and former catcher Kevin Cash downplayed the effect of that information on pitch calling.

The Rays' wristbands are primarily a response to a rule change limiting mound visits to six per game, a shift that makes the already complicated task of relaying pitch calls all the more challenging. Catchers can be barred from going to the mound if a team has exhausted its allotment, and they're not thrilled with the change -- Martin Maldonado (Angels) and Willson Contreras (Cubs) have said they'd rather pay fines than limit their visits.

Teams use intricate sets of signs to disguise pitch selection when a potentially nosey baserunner is on second base, and not every pitcher employs the same systems. The Rays used 30 pitchers last season, and each of them had at least two sets of signs for use with runners on base. There's some overlap, but it's still a lot for catchers to memorize -- a major impetus for all the mound visits.

"I know there's a lot of pride that catchers take in their game-calling abilities," said Cash. "We're not looking to take that away from our two guys because we feel they both do a good job retaining information before a series. But nice little quick reminders don't hurt anybody."

Tampa Bay could use even more pitchers this year thanks to a strategy shift with starting pitchers. The team plans to use a four-man rotation while relying on the bullpen to cover games that would have gone to a fifth starter. That means the Rays will intentionally use six or seven pitchers in some games.

As more teams try to limit the number of times starting pitchers face an opposing order, such games could become more common around the majors. Plus with last year's shift to a 10-day disabled list, there's more shuttling of arms between Triple-A and the majors, broadening the pool of pitchers that catchers will work with over the course of a season. Teams used a record 755 pitchers last season, compared to 666 in 2007 and 534 in 1997.

"There's just more bodies you're thinking about," Cash said, adding "I think it's going to be beneficial to have what our pitchers' best strengths are when attacking hitters. Quick little reminder for him to look at."