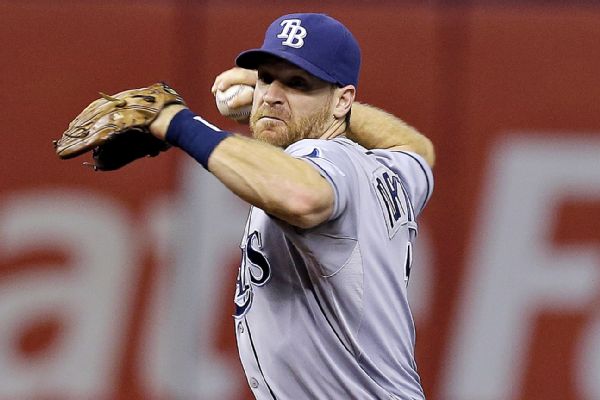 LOS ANGELES -- In the hunt for a second baseman and a leadoff man, theDodgersfound both in Logan Forsythe, whom they acquired Monday from the Tampa Bay Rays in exchange for highly regarded pitching prospect Jose De Leon.

Forsythe will be counted on to help the Dodgers overcome their deficiencies against left-handed pitching, an issue that reached historic proportions in 2016. The Dodgers were not only last in baseball this past season in on-base percentage (.290) and OPS (.622), their .213 batting average against lefties was the worst of any playoff team in the past 100 years.

"He's a grinder. A professional hitter," Dodgers president of baseball operations Andrew Friedman said, according to the Los Angeles Times. "Can really handle left-handed pitching, as well as right-handed. Has some versatility. Is a good baserunner. We felt like he was the type of player that we needed to be aggressive and go out and add to our current group."

Forsythe had a .333 on-base percentage against lefties last season and a .359 mark in 2015. Of the six Dodgers players who had at least 100 at-bats against left-handers last season, only one had a better OBP than .313, and that was Howie Kendrick (.333), who was traded to the Philadelphia Phillies this winter.

The Dodgers started last season without a true leadoff man, but Chase Utley adapted to the role. Forsythe's most games at any lineup spot are his 150 as a leadoff man, with the fifth spot next at 86 games.

The Dodgers had reportedly been in discussions to acquire slugging second baseman Brian Dozier from the Minnesota Twins, but any chance at that deal fell through earlier this month. De Leon was also reported to be a key piece in that deal.