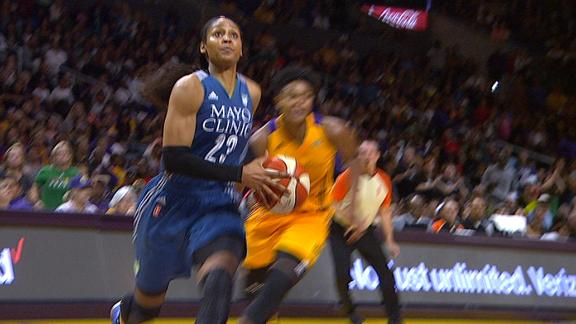 There's Seimone Augustus, the longest-tenured Lynx player, and Lindsay Whalen, the Golden Gopher and native Minnesotan. Maya Moore's arrival as the No. 1 draft pick was that key piece in igniting what has been a seven-season run of excellence. And Sylvia Fowles -- who prefers "Sweet Syl" to "Big Syl" as a nickname, although she is both -- is the MVP center who was willing to sit out half a season to force a trade to the Lynx back in 2015.

But there is a special feeling the Lynx faithful seem to have for Brunson, the workhorse forward who had one of her best games at the most important time Sunday. The Lynx staved off elimination, preventing the Los Angeles Sparks from winning a title on their home floor, and now will head home to Minneapolis for Wednesday's decisive Game 5 (ESPN, 8 p.m. ET) of the WNBA Finals.

Minnesota won Game 4 over Los Angeles 80-69, preventing the purple and gold confetti celebration at Staples Center for the second year in a row. Brunson had 18 points and 13 rebounds, plus led the defensive effort that held Sparks star Candace Parker to 11 points on 3-of-8 shooting.

"As far as our fans in Minnesota, they really do support me, as they support us all," Brunson said. "Maybe it's that they understand the grit. They know what it is to go work hard for everything you get. And they respect that."

Last year, Moore took over Game 4. This year, the Lynx's rebounding prowess really hurt the Sparks. Fowles led Minnesota with 22 points and 14 rebounds, as she and Brunson almost outrebounded the Sparks all by themselves. They had a combined 27 of the Lynx's 48 rebounds; Los Angeles totaled 28.

"They killed us on the boards," Parker said, and then explained how much that affected the Sparks' offensive efficiency, as Los Angeles was held to its second-lowest point total of the season.

"We're playing against five players that are set defensively when we have to take the ball out every time," Parker said of the number of second-chance opportunities the Sparks surrendered. "If we come up with rebounds, we're able to play in flow. We're better then.

"We made them miss, and then gave them 16 offensive rebounds. That's the story. Everything stems from that."

Brunson has more rebounds than anyone in WNBA Finals history; her total now is 202 in 33 games, 24 of those with Minnesota and nine with Sacramento. In all WNBA playoff games, Brunson is second in rebounding to former Indiana star Tamika Catchings; Brunson has 555 in 80 postseason appearances to Catchings' 598 in 68.

"As many extra possessions as I can get us, I try to do," Brunson said. "I was just trying to go after everything. It's execution and just hunger. They have great rebounders as well, though."

But, as Parker said, the board work just wasn't there as much as it needed to be for the Sparks. And the Lynx, fueled by facing elimination, seemed the more aggressive team all the way around.

The Lynx sent a message early when Whalen clobbered Sparks guard Odyssey Sims on a breakaway to the basket not even two minutes into the game. Whalen earned a flagrant 1 foul, and Sims spent some time on the floor recovering. Sims came back, though, to lead the Sparks in scoring with 18 points.

"She's such a great finisher, one of the best in the league," Whalen said. "I was just trying to go for the ball and make sure that she wasn't able to get it up for a [three-point play], because she's had a couple of those against us."

Sparks coach Brian Agler credited the Lynx defense in general, saying, "They made it very difficult for us. Our offense didn't flow as well as we would have liked. Didn't make great decisions."

Last year, the Sparks won the first and third games of the WNBA Finals and the Lynx won the second and fourth games. Wednesday, one of these teams will join the Houston Comets as four-time WNBA champions.

In Brunson's case, though, it would be her fifth ring; she also won a title with Sacramento in 2005. Brunson, who will be 36 in December, is the second-oldest player in these Finals, with teammate Plenette Pierson, who turned 36 in August, as the oldest.

But age was just a number Sunday, because Brunson defied the years and elevated the Lynx yet again in a must-win game.

"We've taken it to the wire; this is it," Brunson said. "We have an amazing opportunity in front of us. It's time to leave it all out there in Game 5; there's nothing after that. We just have to go out there and compete, and we'll see what happens."

Moore's and-1 puts Sparks away
Rebekkah Brunson grabs the offensive board, and Maya Moore finishes through contact, giving the Lynx a double-digit lead with under two minutes to go.

Fowles gets up for impressive rejection
WNBA MVP Sylvia Fowles displays her stellar help defense as she steps in and denies Alana Beard's layup.

Lynx in rhythm as Whalen finds Brunson for layup
Lindsay Whalen connects with a cutting Rebekkah Brunson for two, adding to Minnesota's lead over Los Angeles.