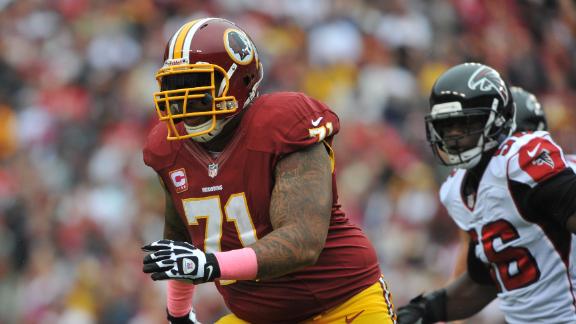 The extension is worth $66 million, and Williams will receive $43.25 million in guaranteed money, according to his agent, Vince Taylor. The deal makes Williams the NFL's highest-paid offensive tackle.

Williams, 27, was entering the final year of his contract and made it clear that he didn't want to play elsewhere. He has been a key part of the offense since joining the Redskins as the fifth overall pick in 2010.

The Redskins have played only one game without Williams the past three seasons, and while they have struggled quite a bit in recent years, they rely on his skill to help them offensively. Williams' athleticism and quick feet enable them to run different plays when he's in the game.

Playing without Williams in the second preseason game against Detroit, the Redskins' offense struggled both in protection and in the run game.

Williams entered the offseason more motivated to stay in better shape after playing hurt for most of the second half of 2014. Williams lost 20 pounds after altering his diet.

In addition to the deal with Williams to help improve their offensive line, the Redskins hired noted line coach Bill Callahan in the offseason. They also drafted right guard Brandon Scherff with the fifth overall pick this spring after selecting right tackle Morgan Moses in the third round last season.