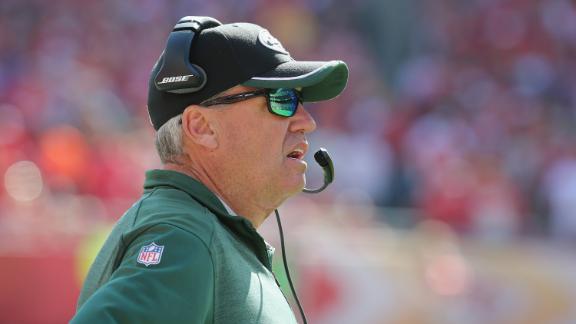 ORCHARD PARK, N.Y. -- Hours after theBuffalo Billspresented Rex Ryan with a "Welcome Rex" pizza at their facility, the team's new coach headed around the corner for a beer with Hall of Fame quarterback Jim Kelly.

Ryan has been embraced by Kelly, the iconic former Bills quarterback.

"I am very excited about the hiring of Rex Ryan not only because of his coaching ability but also because of how he works with players and how players work for and respect him," Kelly said in a statement posted to his wife's Instagram page Tuesday. "He now has very talented players to go with the enthusiasm he brings to the locker room."

Well this friendship is off to a good start! A cold beer at The Big Tree never hurt anyone. Wish I could've listened in on the conversation!! Their smiles speak more than words. WELCOME to BUFFALO and Bills Country Rex Ryan. The Kelly Family is cheering you on! #BuffaloBills #BillsMafia

A photo posted by Jill Kelly (@jillmkelly) on

Jan 13, 2015 at 5:18pm PSTKelly is no stranger to the Big Tree Inn, a bar adjacent to Ralph Wilson Stadium that was popular among players during Kelly's playing days. Even former coach Doug Marrone made a few stops at the establishment.

"I'm looking forward to seeing what he does on the offensive side of the ball," Kelly said in the statement. "I'm also excited about Rex Ryan's determination to bring winning football back to the RALPH, to the amazing Bills fans and to the great city and people of Buffalo! GO BILLS!"

The Bills greeted Ryan with an oversized pizza decorated with "Welcome Rex" in spinach and colored ricotta cheese as he toured the team's facility Tuesday.

Ryan later attended theBuffalo Sabres' game against the Detroit Red Wings with several of his formerNew York Jetsassistants, including defensive coordinator Dennis Thurman. The Bills have yet to announce any of Ryan's hires beyond offensive coordinator GregRoman.

The Bills will introduce Ryan at a news conference Wednesday.