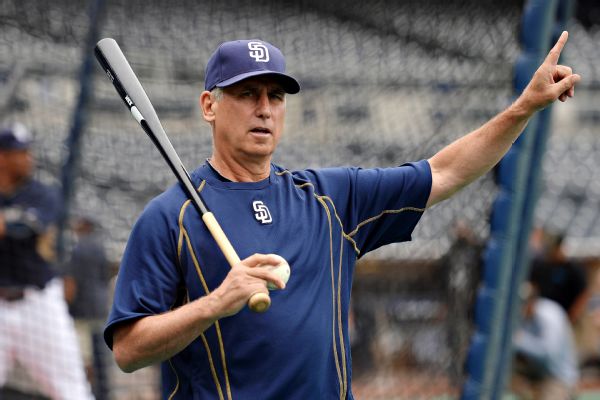 The highly regarded mound guru has been hired as manager of the Colorado Rockies, a source confirmed to ESPN's Jim Bowden on Sunday night.

The Rockies scheduled a Monday news conference to introduce their new manager, but the release did not reveal the team's choice.

Black takes over for Walt Weiss, who stepped down last month when his contract expired after four years in charge of the Rockies. They finished 75-87 last season, their best record since 2010.

Washington nearly hired Black after the 2015 season before contract talks broke down and the Nationals gave the job to Dusty Baker.

Black's hiring by the Rockies was first reported by FanRag Sports.

After a major league career that spanned 15 seasons on the mound, Black became a respected pitching coach for the Angels. He brings a wealth of experience to a team that has long struggled to get outs in Denver's thin air a mile above sea level.

Colorado had a 4.91 ERA this past season, tied with Cincinnati for 13th out of 15 National League teams. Arizona (5.09) was the only club that was worse.

Yet the Rockies boast young talent in a starting rotation led by Jon Gray, the third overall pick in the 2013 draft. Tyler Chatwood had the best road ERA (1.69) in the majors last season, while Chad Bettis and Tyler Anderson made big strides. The team will more than likely lose Jorge De La Rosa, the franchise's all-time winningest pitcher, in free agency.

One of the biggest challenges will be shoring up a shaky bullpen that blew 28 save chances in 2016. Colorado finished 24-36 in games decided by no more than two runs.

Black was lauded for the way he ran bullpens with the Angels and Padres.

"I like the group that we have," Arenado said after the final game of the season. "I think we are close. But basically, when I say that, it's for the fans. I want fans to know that so they don't lose hope. I feel bad. They come out every day to see us lose the way we do sometimes."

Arenado led the NL in RBIs (133) and tied for the home run title with 41. He played stellar defense at third base again and could be in line for his fourth straight Gold Glove.

Black spent a large portion of his playing career with Kansas City and was part of a Royals rotation that helped the team win the 1985 World Series. He won 121 games with Kansas City, Seattle, Cleveland, San Francisco and Toronto.

After his playing days, he became the pitching coach for the Angels and spent seven seasons under manager Mike Scioscia. Black helped the team to the 2002 World Series title before taking over the Padres heading into the 2007 season.

Black rejoined the Angels as a special assistant to the general manager last November.